Sometimes, something so special happens, it inspires you in a way you’ve not felt inspired for years. It releases endorphins that course through you, keeps you smiling like a giddy loon on the car, train and tube journeys home long after the final whistle.

People edge away from you, slightly concerned, but you don’t care. Cos you’ve just watched your team win the league. Essentially the league, or level at least, you’ve been trying to win, since you first started coming to watch your local side, 19 years ago.

I realise that’s a very specific experience I’m describing. Needless to say, that yesterday, it was very much my experience. 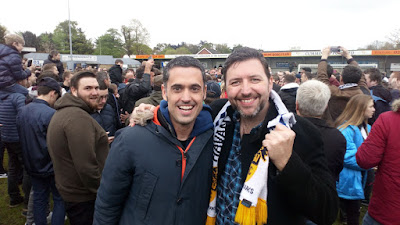 We’ve had years where we’ve been in the ballpark, of course, a third place finish in the Southern League before the Conference South and play-offs existed, and a couple of semi-finals in the post-season shakedown since they have.

When former Bournemouth boss Lee Bradbury took over from the hapless, seemingly barely interested Stuart Ritchie in October 2012, it seemed ambitious. Could Lee be the man to take us out, finally, of the sixth tier? Four years later he did. We were relegated.

I have to admit, at that point, if our long-standing chairman Derek Pope had decided to bundle up the bungling Bradbury inside a roll of carpet, throw him in the back of a Luton Van and head for some remote waste ground somewhere, I’d not have reported him missing.

However, our chairman is a loyal type, and he was willing to give Lee the chance to put right what he had got so spectacularly wrong. It didn’t start well, as we lost our first fixture away in the Isthmian League to Leiston, a place that barely exists, and who were seemingly more concerned with the vegetable show going on in their clubhouse at the same time. It’s hard to feel the adrenaline of opening day battle, when some old boy is barrelling about the side terrace wearing a smug grin, a rosette and a big fuck-off marrow under his arm.

Form started to pick up, and a run of results in February and March of 2017 put us in contention, albeit in a tussle with local rivals Bognor Regis Town, whose two best strikers, Jason Prior and Alfie Rutherford, we had nicked before the campaign. They would naturally love it, LOVE IT, if they could best us in the league after that.

As it turned out, our penultimate fixture, on Easter Monday, was to be a home game with Bognor. At that point they were in the driving seat, but a 1-0 win in a packed West Leigh Park saw us win the leapfrog. Nonetheless we still had to better their result on the final weekend. We went to Kingstonian en masse and, err, drew 0-0.

As it became clear we wouldn’t be scoring if we played this match well into May, word came through that Bognor had gone 1-0 up. At that moment, our faces turned to a hue of watery beige and we feared the worst. However Bognor’s opponents, Metropolitan Police, scrambled an equaliser, and never has a group of beered up fellas marauding around south London had so much affection for the plod.

So, the wrong had been righted, but it was still far from easy to say that Lee Bradbury was a manager beloved. He owed us, and thankfully had stuffed some used notes into our wallet at the eleventh hour, before we sent round Big Nicolae and his favourite hammer.

Much as it was nice to visit some different places like Lowestoft in our brief stay in the Isthmian, it felt good to be back in what we largely feel is our natural home – the Conference South. However after a ghastly pre-season, and the strengthening of the squad to the tune of only one player – former Pompey striker Matt Tubbs – frankly the sum total of our ambitions was just to avoid the calamity of two seasons before. If we’d finished 12th this year, we would have felt that to have been a great success to build on going forward.

The season was a bit bitty to start with as well, no real sign of things to come. Several times we were beaten, or at least drawn with, thanks to last minute goals. However, it seems around mid-September our defensive unit, marshalled impeccably by our veteran keeper Ryan Young, looked at each other and said, right then – let’s concede no more goals shall we? Do you know, they pretty much managed it.

Over the course of our 42 match season, our defence conceded only 30 goals, most remarkably in the 21 away games we let in only 10.

By mid-January, it was becoming a little clearer who would be tussling at the top for the remainder, and thus our away game at Dartford looked to be crucial. We went there and dominated them for 88 minutes. However this followed them scoring in those opening 2 minutes and us not being able to break down the door.

A setback, and not the last. Having wrestled our way to the top in mid-March after a wobble from Dartford, we then proceeded to lose to play-off chasing Truro, and only manage a 0-0 draw on Easter Monday at soon to be relegated Whitehawk. After that, both us and Dartford were on the same points (once Dartford had played their game in hand), and it was a matter of bettering their results. Consider this: Dartford won their last 8 games. Yet still we prevailed.

Coming into the final week of the season, an early April postponement meant we now had a game in hand, playing on the last Wednesday an East Thurrock United side that had already played on the Saturday and Monday. At this stage, we knew we needed to win to go level with Dartford on points, but they had an advantage of three in goal difference, plus the knowledge that they had scored many more than us to give them an additional edge if it came to GD parity.

After an hour against a resolute ETU, it was 1-1 and it looked like promotion may be gone from us. However, the first thing to go was the legs of the East Thurrock XI, pretty much en masse with fifteen minutes left. Suddenly looking as withered and atrophied as malnourished 110 year olds, they collapsed like Del Boy through an open bar hatch, and we were able to blitzkrieg their by now only notionally defended net, ending up victorious to the tune of 6-1.

Thus the initiative was back with us or, for the more pessimistic among us, the opportunity to win 1-0 while Dartford win 4-0 on the final day and thus smash it all on the rocks like a drunk amateur yachtsman. Pressure. Pressure! PRESSURE!!!!!! Aaaaaaaagh.

The Darts were playing already relegated Bognor, while we were playing nothing-left-to-fight-for mid-table Concord Rangers, and you could have forgiven either side for checking out and mentally thumbing through the Thomas Cook brochures instead of giving their all. 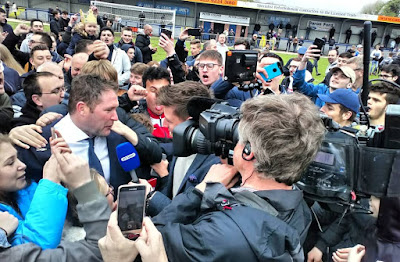 Kicking off inside a West Leigh Park fizzing with excitement, it was only 9 minutes before we took the lead, Theo Lewis getting the final touch to send the terrace into rapture. Only 26 minutes had gone when Matt Tubbs stuck his leg in the right place to double the lead, which took us to half time. Meanwhile over at Dartford, there was no score and they required a 5 goal swing in the second half.

Well, that wasn’t the only scenario available to them, but we weren’t even thinking about that; it was all seeming so easy. Very much unlike us. Having had play off defeats, missing out on play offs on goal difference and even being relegated on that blasted goal difference two years ago, to be seemingly coasting to the title seemed most un-Hawk-like.

We could breathe easy, it felt. Then Concord pulled one back after six second half minutes, and our waving, clapping jazz hands became clenched claws, especially as Dartford scored one, and then another. Nineteen minutes to play and they could easily score a couple more in that time.

Then, the unthinkable, our defender Jordan Rose’s leg got in the way of a Concord shot and sent the ball floating past keeper Ryan Young. Well…you could have heard an ant fart. Anvils crashed into the bottom of stomachs. Mouths lolled agape. This was the nightmare scenario, with Dartford winning, a draw would be disaster, however many they sent net-wards. Even when Bognor pulled one back with five minutes to go, no one seriously entertained the idea that they could grab a draw too.

This was it. Snatching defeat from the jaws of victory once again. The traditional Hawk way.

Or maybe it isn’t. At least not always. Last season of course, we did just enough to fall over the line. Six years ago, we stayed up with a 3-2 win at home with the final kick of the whole darn season.

Mmm, as the clock ticked down, my thoughts drifted back to that day. Could it happen again? Surely not.

And yet, in the 89th minute, put through with an acute angle to aim at, Jason Prior did what he has done over 50 times in his two season stint with us – defeat the keeper with ease. Ah, so THIS is what we do.

Thus utter bedlam. The Bartons Road terrace a blur of bouncing bodies. The players probably bundling, but who knows, I was bent double at this point trying to reclaim the breath those same players had just stolen from me.

Less a falling over the line than suddenly discovering the ability to fly, swooping past a distraught Dartford and picking up the National South trophy en route. Two successive promotions. Had you suggested that to me two years ago as we fell into the Isthmian League, I would have said you required a cold bath, a dry slap and a life inside a rubber room.

There’s nothing like a relegation to make you retreat and regroup, clearly. Lee Bradbury was rightly criticised for relegation, but he is a manager redeemed, and reclaimed by the terrace choir as a hero rather than just a well-dressed bloke they’ve happened to see lurking round the dug outs.

Over the last 19 years, much as we’ve taken time to moan from time to time, it’s been quite the ride. In 2003, beating a higher level non-League side seemed like a tall order, then we stiffed Forest Green Rovers in the Trophy. Five years later, we had the insanity of a cup run that allowed us to beat York City, Notts County and Swansea City on the way to leading Liverpool at Anfield (for a bit).

Now we have these two league wins in two seasons, and we’re going to the highest level of what we call ‘non-League’. Next year, Leyton Orient, Wrexham, Chesterfield and Hartlepool United will be our peers.

After all of that, in terms of having any ambitions left, we may well be done. The Football League is surely a bridge too far.