Check yo’ privilege, the kids say that, don’t they? They also say “I’m just mossin’ wiv my mains, bro” and when they do, I have absolutely no idea what they’re talking about. Hashtag Helptheaged etc. However the privilege thing I can get on board with. Let’s be grateful for what we have, rather than bitter about what we don’t.

That I am racking my brains for a positive outlook probably betrays the fact our play-off campaign did not have the gushing pay-off for all the grunt we put into it. Either that or I’m really getting into cosmic ordering and believe Noel Edmonds to be the new Messiah. 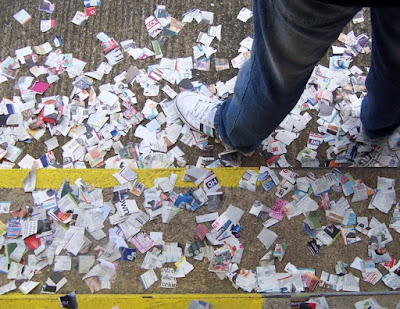 As our game kicked off against relegated Tonbridge, and Dover began their tussle with relegation threatened Hayes & Yeading United, we had the prime slot. Most of the day’s available scenarios would leave us there, poking our head into the play offs like a sweaty labourer appearing at the top of the ladder into a loft conversion just in time to see the lady of the house accidentally drop her bath towel.

The momentum was all with us in the first half as we went in for the kill on a weak foe. However Tonbridge, having largely acquiesced to relegation thus far, appeared keen to dig in and give a decent farewell to long –serving manager Tommy Warrilow; his resignation stroll into the sunset post-dated for the end of this closing fixture. They had little about them to threaten us so we felt quite confident that ‘something’ would give.

As time wore on though, the more it felt like someone up there really didn’t like us. Chances came and went, headers not directed with enough force, or in the right direction, until Perry Ryan put his forehead firmly against a set-piece cross from Scott Donnelly. The net billowed and we danced for an embarrassingly long time considering the linesman had been holding his flag up for a while. Punch in stomach #1.

Angels keeper Lewis Carey also had to be keen and ready when both Donnelly and Nic Ciardini unleashed shots which were tipped over the bar and around the post respectively. Then when Christian Nanetti went down in the box in his customary bloke-trying-to-jump-over-a three-foot-wall-and-catching-his-toes-on-it manner, Scott Donnelly took responsibility, apparently for giving Carey a fairly routine penalty save to make. Punch in stomach #2. Starting to really hurt now, guys.

Having dominated the half with nothing to show for it, we went into the break feeling torn, cognitive dissonance making us assured that it was both not our day, and yet that something must surely happen. Something didn’t give, the second half being a damn squib compared to the first half effort. One can’t, or at least shouldn’t, be angered by that though. Those same fellas ran themselves into the ground three times a week and through any number of theoretically immovable objects for two months to give us this chance when most of us never in our wildest dreams thought it possible.

Our treacherously steep schedule for the final eight weeks was the kind of obstacle that would make even Sir Chris Bonington think twice. Yet we ran up that hill with only the occasional prob-le-em, putting in the kind of effort that would make Hercules look back at his twelve labours and concede that he hadn’t really motivated himself sufficiently.

However, just as we came within sight of the summit, we bellowed with heady excitement, causing an avalanche. Our 2013/14 season ended with us packed beneath the snow. Snow with bits of yellow in it. Well, actually that’s not strictly true. As the referee blew his whistle to end our season, at that exact moment, we were still occupying that final play off place, with our draw matching Dover’s present 1-1 stalemate.

In the old days, this might have been enough for us to leap onto the pitch and frolic nude in this garden of England like ancient Athenians celebrating victory in the Battle of Marathon. As it was Dover Athletic’s season still had about six minutes left in the tank at the point when Mr Coggins blew his whistle to end our campaign and our teeth took to our fingernails for as frank and earnest an interaction as they’ve ever had.

The players sat on the pitch to await their fate and it wasn’t long in coming as Twitter stuck a dagger in and the word “BASTARDS!!!!” was angrily launched like a spear from my friend Mark at the back of the terraces, his anguish imbedding the hateful truth into our hearts as we resigned ourselves to the inevitable. Lee Bradbury certainly knew the game was up ushering the players off the field, knowing the big smooch cluster cuddle twixt players and supporters would not be taking place on this green and increasingly unpleasant land.

If we had not been in the box seat to start with, if we had not had the goal ruled out, the penalty saved and not had to wait around in silence for Dover to crash down their final killer blow, this wouldn’t feel anywhere near as gutting. It was precisely the harshest circumstance in which to miss out. Goal difference is a necessary tie-breaker, but nasty when you’re on the wrong end of it.

The cruellest image that will live in my mind is the memory of Perry Ryan running behind the net into which he had just headed the ball, roaring the gospel with the proud passion of a man who had just returned from a successful time-travelling mission to kill Hitler. Then watching his shoulders drop in unison with my own as we noticed the man on the touchline practicing his semaphore.

We can think back now to how things might have been different, perhaps the tactics in that game back in September, you know, that one we really shouldn’t have lost, being the difference between our 69 points and the extra one we needed. How would it have been had we been able to keep Ollie Palmer up front for one more season? What if we’d had a different manager?

The point is it has been the decisions of the present management, and the performances of the current squad, that have given us one hell of a thrill ride in the second half of this season. After losing the Trophy semi-final we could have moped around and given up the ghost. Instead every minute of the season after that glum February afternoon mattered, not only to we supporters but clearly to the players too. I would feel churlish to expect any more than that. Some people have real problems and tragedies to deal with. We get to play another season in the Conference South, and will be proud to do so.

So I’m choosing to ignore the vinegary bookends of the final two months, as two hefty disappointments surrounded an uncommonly exciting few weeks as we overcame the odds to get even within sniffing distance, let alone a goal difference scenario. This time two years ago we had avoided relegation with the last kick of the season; this time we were undone by a kick after our season had finished. Such is football. Highs and lows, and even though this scenario saw far less dancing than our miracle escape, and the memory of those joyous smiles dissolving into pensive lip-chewing and bowed heads, I’d still rather we were dealing with the edge of the promotion knife than the relegation one.

These players, and this management team, have made us believe in our club again, after a few wilderness years of drudge and toil and for that I offer them my thanks, with absolutely no caveats.
Posted by skif at 5:05 pm

I've read your blog for years now, and it's one of the best football ones going. Never thought I'd ever be invested in the results of a team from the South of England but there you go. Best wishes from an exiled Greenock Morton fan.