Here in the east London/Essex borders there has been much talk recently about the use of an Olympic facility for football. I’m not entirely sure why this should be big news, apart from the FA ignoring its own rules and a proud club being strangled for not being as big as the club that will soon be under its skin and withering them like a tumour. All seems fairly standard Football Association practice to me, where’s the story, eh?

Besides, there is already a stadium hosting senior football in east London that has Olympic pedigree, the Cricklefield here in Ilford having hosted preliminary fixtures for the 1948 Games. Mind you I’m not sure West Ham would be so keen on jamming their fan base into this place as they would the slightly roomier new gaff near Stratford. They clearly like running tracks though so who knows? 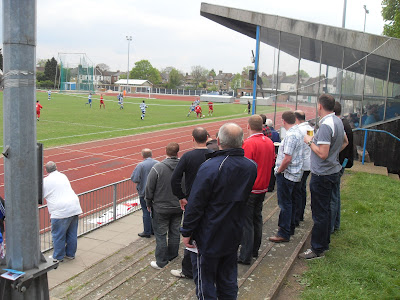 Here, about 30,000 loyal Hammers would have to watch from the large graveyard next door which, although I’m no expert, might not exactly meet Premier League regulations. Or indeed moral ones; when people buried their relatives here it was probably not in the hope that one day they would act as foundations to a giant human pyramid singing about bubbles.

In any case, there’d be no room in the schedule for another team here as Ilford already play landlord to fellow Isthmian North side Waltham Forest. It’s not the only thing they share either as these two clubs are currently the last remaining teams engaged in the relegation battle in this division, both scrapping away for the last pocket of air in a cave rapidly filling with water. There is only one spot, Leyton FC having resigned earlier in the season, and one of the Cricklefield sides will fill it. Clearly this has not been the venue to see home wins this year. A rare one today would, however, virtually guarantee safety for Ilford.

However, they found themselves hosting a Grays side still with a shout, albeit a muted one, of making the play-offs and with a relatively large collective of fans in tow, especially for this level in the London area where 40-60 sized crowds are standard at most venues, including this one. 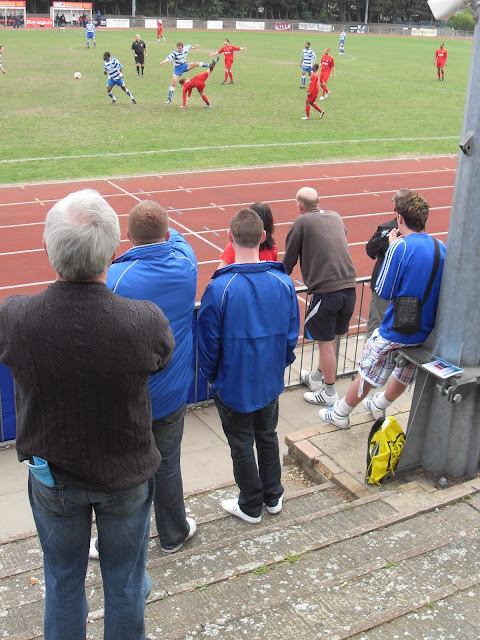 Of course, this time last year Grays were in the Conference Premier but then had a nightmare summer where they had to leave their home of 114 years, the Recreation Ground, and with the money running out the club resigned from the Conference structure and were placed into the bottom tier of the Isthmian League.

One imagines the morale must have been pretty low at the start of this campaign, what with the three division drop, the ground share arrangement with East Thurrock United, and the limited playing budget. However the supporters seemed in good spirits here, and why not after a mid-week 9-0 thumping of Cheshunt, which added a goal-difference element which might prove to be vital in their pursuit of post-season extras, given they still require snookers.

In the dug-out Grays have former West Ham hard man Julian Dicks as manager, but my expectations here were somewhat confounded, Given his on-pitch reputation I was expecting throbbing temples and spit, the Malcolm Tucker of the technical area. Instead he appeared relatively gentle in his direction, to the point where I was imaging the post-match dressing room debrief might consist of some warm milk and a chapter from The Magic Faraway Tree. 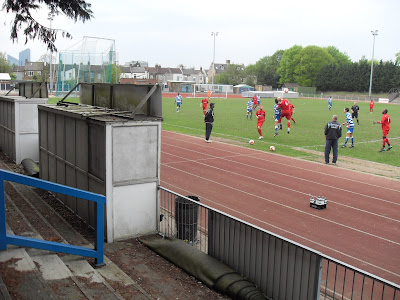 Still, however he went about his business, it was enough for Grays to get what they needed on a surface so dusty it made you shudder to think what the top of their door frames might be like and which was causing problems to their pursuit of rhythm. They had to wait for the second period to score, Duran Reynolds threading a beautiful ball between the central defenders after 50 minutes, allowing Alex Osborn to run through and place the ball beyond Ilford keeper Robert Budd.

With quarter of an hour remaining they made it two. Jason Fontaine danced through an Ilford defence that were collapsing and rolling about like empty plastic bottles in a stiff draft, before knocking on to Osborn who threaded the ball to the on-rushing Eljay Worrell who checked inside and placed his shot inside the post despite the attentions of Budd and a defender stood on said post.

Grays move forward albeit with the recognition that it might have to wait another year, whilst Ilford will have been relieved that, over at borough neighbours Waltham Abbey, their tenants had been on the wrong side of a 5-4 thriller. Ilford and Waltham Forest have three games each left to play with Forest needing to make up six point and 12 goal gaps. The surgeons working on their club’s battered body look wearied, resigned and ready to issue the certificate.
Posted by skif at 10:38 pm