As you leave Elstree & Borehamwood station and head in the direction of the town centre, the football club and, most notably, Elstree film studios, you find yourself stepping on the names of some of the leading actors that, I guess, would have worked at said studios over the years. Each name encased in a star, it’s pretty much a low-rent Hollywood Boulevard but nonetheless uses its limited space wisely to showcase the real titans of the film business: Jack Nicholson; Peter Sellers; and, of course, Reg Varney.

Nowadays Elstree is most well known as the home of Eastenders and speaking of things episodic and largely depressing, let me bring you to tales of our end-of-season run in. Following two back-to-back away wins at Basingstoke and Dover, hopes turned once more to us repeating the end of last season; crash-bang-walloping our way back into play-off contention. 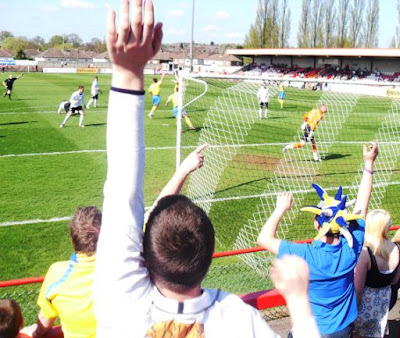 However, this was then followed up with two home games that saw us lose to Chelmsford and gather just a point when we played Dover for the second time in six days. These results took our enthusiasm and perforated it as though it were an extra-leaky tea-bag. In morale terms, there are Tetley granules all over the kitchen floor.

Those standing behind the goal here at Meadow Park may have discerned, faintly, a sound like a lowing cow in a distant milking shed, or someone squeaking out an unexpectedly long raspberry fart. To cut a long story short, this was the sound of the energy wheezing out of our season like air from a punctured balloon. With Boreham Wood lacking a following and the legs-out weather, this game was always going to feel a bit like a pre-season friendly and the action did nothing to persuade us that this wasn’t, in fact, the third week in July. 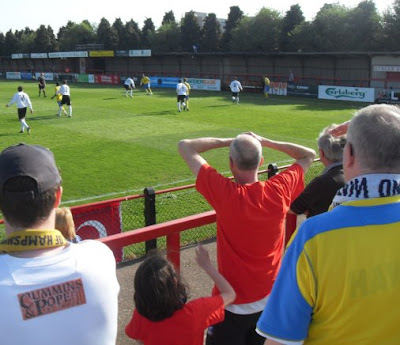 A good strong opening eight minutes by the Havant ‘Ville was topped, as is often the way of these things, by a goal for the opposition, Greg Morgan striking handsomely past Aaron Howe. After that, we sat through 80 minutes of neither team doing very much of note, only enlivened by a Muzzy Tiryaki header which sailed just over the crossbar, and a moment when Wood keeper Elvijs Putnins stepped behind his goal-line after catching the ball, although not enough to trouble the linesman.

So, now we find ourselves with six more games to play fighting, in the main now, to retain a place in the top ten. We are stationed ninth and the gap between ourselves and eighth place Woking runs to 13 points. There is a positive spin to be applied here, of course. When all is said and done we are presently at the acme of the ‘nothing left to play for’ league.

A well written account of a summery afternoon in the 'Wood! Shame the match didn't match the glorious weather...but as you say, still TOP OF (a) LEAGUE!!!