At the start of the season, I guess the base rate of our hopes was merely that we wouldn’t have to contemplate the ‘r’ word with any seriousness, particularly not in the second half of the campaign.

After an unexpectedly excellent start, we now decided ourselves capable of ‘flirting with the play-offs’. Four away wins on the trot and a home win against title favourites Dover, and we could see a bright future ahead. Possibly even beyond flirtation to (allow me to borrow a line from an old Tommy Cooper sketch here) dragging ‘er into a shop doorway, and with a bit of luck… Ahem.

However, the ways it’s been going the last few weeks, our luck appears to be out and our flirtation technique needs a little oil applied to its hinges. Increasingly, our attempts to make furtive, coquettish eye-contact with the play-off places have been met with a thousand-yard stare and a frown you could stir concrete with.

After an early exit from the FA Cup, there was a not altogether unrelated burst of enthusiasm on our forum for us properly bothering with the Hampshire Senior Cup this year. A largely full strength XI turning out at Hythe & Dibden last Tuesday for a 6-1 win suggested Shaun Gale might well be up for it, for a change, in the circumstances. 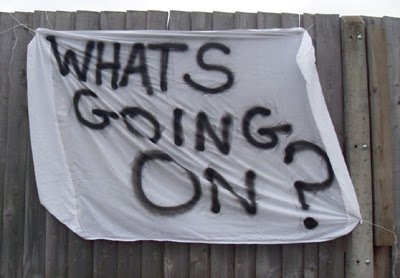 However, there seemed to be more keenness for this, than there was for us giving the league campaign a bloody good go. If we were to do this and build on the groundwork laid by those first four away games, I couldn’t help but feel that this game against the Bish was important, particularly after the lacklustre nature of the second half performances against Eastleigh two weeks ago, and Chippenham in the FA Cup last Saturday.

In fairness, the team didn’t give us one shockingly poor half this weekend. They gave us two. However Bishop’s Stortford were hardly in great order either and 1-0 was exactly the right result. Both sides were poor, but we were poorerer than thems.

It’s not like they weren’t there for the taking, with all sorts of oddness happening at their club in the past week, with their long-serving captain departing, amongst others. The confusion was such that a white sheet had been tied up opposite the directors’ box adorned with the words “What’s going on?”

At least I think that’s what it was there for. I suppose I shouldn’t guess at these things. After all it might have been something left behind at a ‘Paint Marvin Gaye Song Titles On Your Laundry’ community fundraiser held during the week for all I know. Perhaps, if I'd rifled through the tea-cups and chip trays in the nearby refuse bin, I'd have discovered a pillowcase reading "Let's Get It On". Who can say? 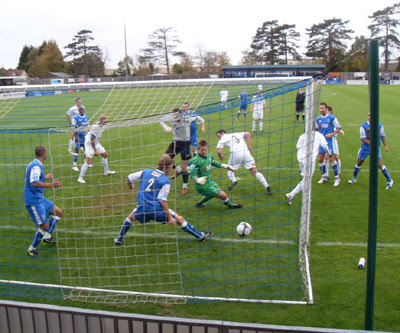 During the first half, when our team seemed to collectively forget how to pass a football to someone in the same colour shirt as them, I’m surprised our support didn’t all troop round, stand underneath the 'What's Going On?' banner and claim it as our own. The optimism still remains in the most part, but it is draining away slowly.

One could potentially argue that the penalty kick that won the Bish the game was soft, particularly when their friendly and talkative keeper, Nicky Eyre, remarked straight afterwards, “Mmm, went for a bit of a Jürgen there, didn’t he?” but we can have no complaints about the result. Our efforts warranted no better.

Eyre was rarely troubled at all during the game, and although we managed to bundle the ball into the net in injury time at the end of the second half, it was too rough a bundle for the ref’s liking and the big point steal was thwarted.

It’d be nice to think that with no FA Cup distractions (and as a result no game next Saturday due to scheduled visitors Bromley’s continued involvement) we could have some breathing space to work on getting back the spirit and finesse we showed early in the season. More weekends like this and the confidence will erode quickly, what with the memory of last years winter collapse. It remains early days in the wider scheme, of course, so let’s hope a little bit of time off will help clear the cobwebs and dust, and that I will have no reason in the coming weeks to daub the words 'Mercy Mercy Me' in big letters on my bed linen.