The higher stakes than usual FA Cup 4th Qualifying Round tie will bring out many a curious local as an attendance of 683 at a ground used to an average of roughly 80 for league games indicates. However it should be noted that a significant percentage, almost certainly more than 50%, had turned up following Wealdstone.

It probably doesn’t help that Aylesbury are the junior of the two semi-professional clubs in town and while the other, Aylesbury United, have been living a nomadic existence at Chesham and Leighton Town since the lease on their old Buckingham Road ground expired (a ground which hosted an Aylesbury United vs England friendly in 1988, prior to the Euro Championships), have historically been the team that the town looks to as ‘theirs’ after several decent FA Cup runs over the years.

Aylesbury FC have recently been touting themselves as the newly formed semi-professional club for the town, despite having merely shorted their name from Aylesbury Vale. The club had also been known previously as Haywood United, Belgrave, Stocklake and Negretti & Zambra FC. Fans of United have regarded this latest change as further evidence that the newer club is trying to muscle into their territory, with a number of United players having departed for Aylesbury FC in the last year. 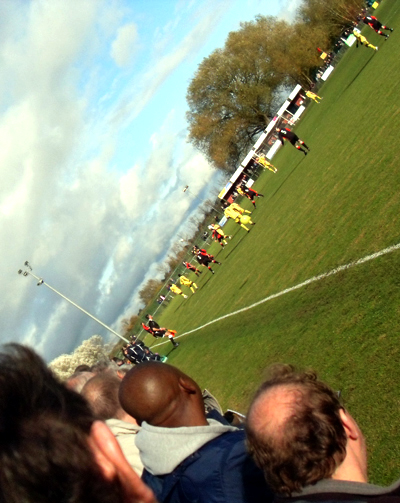 Rumour has it that the wages of the United players are inferior despite them being a league above Aylesbury FC, and while United battle relegation to the Spartan South Midlands League, FC are looking well set for a challenge to be promoted in their place.

It had once been the plan for United to share with Vale but with Haywood Lane unfit for Southern League football, they had to look elsewhere, although Aylesbury FC are now making big noises about getting the ground up to that standard for their own purposes, and even aiming for the Conference.

Talks of a merger have been met with resistance in the past and certainly there appears to be no kinship whatsoever between fans if the message fora are anything to judge by. One message from an Aylesbury FC fan reads “[The players that came to Aylesbury FC] had the right idea and left the sinking ship that is Aylesbury United”, while on the United forum there was a call to arms to “swallow your pride and join the Chesh[am] fans at ‘Vale…surely the last thing [we] want is for [them] to win a sackful of money” for the 3rd Qualifying round game between FC and United’s erstwhile landlords. A case of ‘better the devil who doesn’t want to usurp us’, not that it helped, Aylesbury FC winning that game 4-3 to set up this encounter. 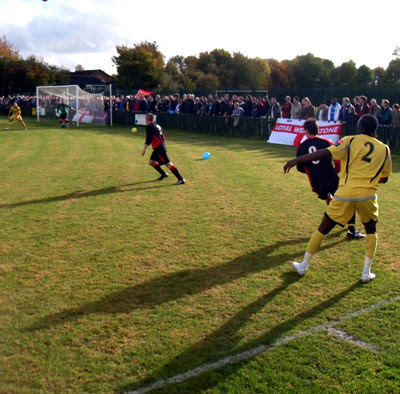 If Wealdstone were to side with anyone in this quarrel, it would likely be the fans of United, given they themselves are all too familiar with homelessness, having not had a ground to call their own between 1991 and 2008. However, their arrival en masse today will have been solely motivated by self-interest. After all, this year’s League One intake has meant even more big names attached to the numbers in the First Round Proper’s velvet ball bag, and thus plenty to excite fans desiring a beano, as well as directors fancying a big pay-day.

Indeed, my mate Father Christmas told me he’s been getting wish-lists well before time this year and all of them asking for an early present. Confused by this, he asked me to take a look at a typical example. It read thus:

I let Santa know what it was all about but he didn’t appear too happy. Whether this was because of the extra workload or the fact that this reminded him that Lapland Wanderers had gone out in the Preliminary Round on penalties to Horden Colliery Welfare, I’m not sure. 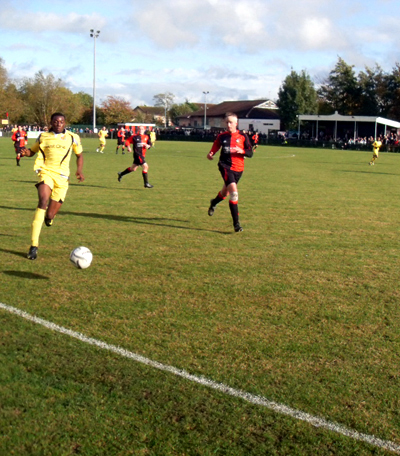 After twelve minutes of the Aylesbury v Wealdstone game, it wasn’t Santa that the away throng were appealing to so much as God, their side having been caught so cold they were causing the spirits in the clubhouse optics to set.

The game was barely into its second minute, the Wealdstone fans having yet to take up their position at the far end when the home side took the lead, Gareth Price bombing down the right before skidding a shot off the surface, which the heavy drizzle of the previous hour was still clinging to, and through the wet gloves of keeper Sean Thomas.

Ten minutes later, with the Stones still trying to find their feet on the drying, but still dewey, surface and their eye for a decent pass in the swirling wind, Aylesbury scored their second from the penalty spot [see below]. Dean Brennan had been felled in the box by Alan Massey, going over his leg as though having been shot out of a cannon, allowing Craig Henney to step up and double the advantage. “Well, I never saw that coming” said one day-tripper as though having just watched an episode of Midsomer Murders which had essentially been an hour of John Nettles firing indiscriminately into a crowded pub whilst laughing maniacally. 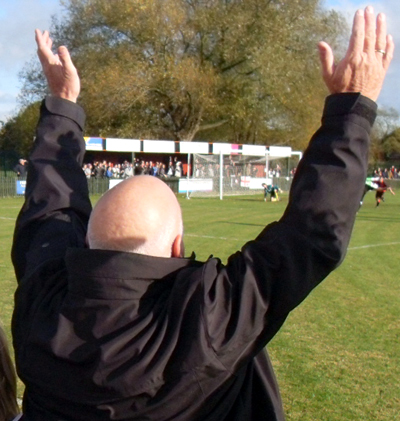 In the 25th minute, it almost got even worse for Wealdstone as Thomas fumbled a fairly simple catch into his chest which then bobbled just wide of the post. However, whilst the Stones support were still exhaling that panicked intake of breath, their side steamed up their end with Greg Ngoyi crashing home past keeper Steve Smith from close range. The local urchins behind Thomas’ goal try to rally themselves by telling the Wealdstone gloveman that, despite his side scoring he was, nevertheless, “shit”.

Wealdstone had the best of the remaining first half action and were able to go into half-time with confidence despite still trailing. Indeed, it only took four second half minutes for Wealdstone to find their equaliser. Ryan Ashe steamed through the middle to latch onto a through-ball from Kieron Forbes. He then managed to stub the floor with his toe but scuffed enough of the ball in his follow-through to send it trickling past Smith. A couple of royal dynasties later, the ball tapped the post, trundled along the line like a tortoise impersonating Robbie Fowler’s ‘cocaine’ celebration, and eventually over the line to much celebration from supporters who had followed the ball’s progress with the non-breathing, slo-mo intensity of someone watching a £2 coin they’ve just dropped roll towards a drain.

Five minutes later and Wealdstone took the lead with a goal as wondrous and confident as the previous one had been shy, clumsy and awkward. Forbes got the ball in the centre-circle and then embarked on a Maradona-esque run through challenge after challenge before flicking over Smith and in. Forbes then proceeded to run behind the goal and towards the corner flag, slapping all the outstretched and elated Wealdstone hands like an excitable child running a stick athwart a long fence. At this point a number of songs appraising the merits of Harrow Borough FC were heard from the Wealdstone mob. 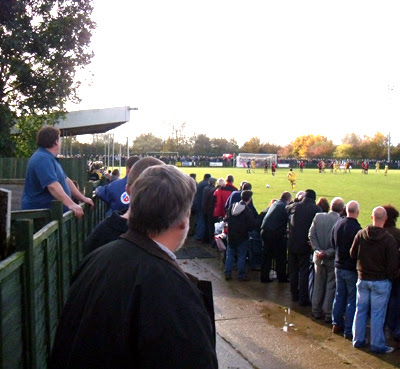 Not that they could relax as with twenty five minutes remaining Greg Ngoyi was sent-off after reacting badly to a stiff challenge. However, Aylesbury did little with their man advantage, their best strike of the remaining quarter being Ben Stevens’ despatch of a spare ball that had bobbled onto the pitch. Rather than side-footing it to the nearby home dug-out, he instead managed to heave it squarely into a spectating face.

Wealdstone however kept up their momentum, with Steve Smith required to make an excellent save from forward, and online auction enthusiast, Mark E’Beyer. Proving that it was no fluke, and actually a specialism whereby a goalscorer must look like an obese man trying to clamber through netting on an Army assault course, it was Ashe who made the game safe, bobbling in another off his shins. Wealdstone were now “going to Wem-ber-lee” (or thereabouts, their new home at Ruislip which will host their first round tie against Rotherham not being a million miles away from Wembley), telling the home side “2-0, but you f***ed it up.” Graceless perhaps, but I imagine any Aylesbury United fans in attendance and incognito would have betrayed themselves with a sly grin.

Great report and pics [especially the second one - which really gives a flavour of the occasion]. Just the sort of tie that appeals to me. Amazing how Aylesbury made it to the 4QR all the way from the EP. Interesting history of the rivalry between the two clubs too.

I'm off to Gateshead/Brentford on Sat. Really looking forward to it.

PS Have you checked the Where's the tea hut? blog [on Blogger]. Frighteningly nerdy [lots of comments on pies] but always an entertaining read.