Ah, fill the cup: - what boots it to repeat
How time is slipping underneath our feet
Unborn TOMORROW, and dead YESTERDAY
Why fret about them if TODAY be sweet

from The Rubáiyát of Omar Khayyám by Edward Fitzgerald

If you weren’t already aware it is, in fact, October again. So soon, you cry, like the eager autumnuses you are. Well, yes, all the clues are there. Our league position is grave in the big picture, on the cusp of a turned corner in the short term. A bit like October. Also, Conference Premier mob Crawley Town are playing us in a national FA knockout competition. They had a go at that just prior to Halloween too, as you may remember.

This season we and Crawley have been regular bedfellows, having been brought together in cups more often than Nescafé granules and milk. First it was the FA Cup, then the Setanta Shield (essentially the Conference League Cup) and now we meet in the FA Trophy. Had it not been for our troublesome geographical anchor, we’d have had fancied our chances of dinging them out of the Sussex Senior Cup as well. 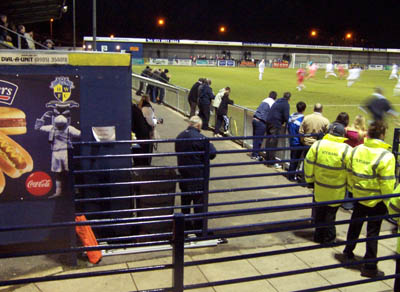 Mind you that last sentence glosses over the fact that, fair enough, they sent us spinning out of the Setanta Shield to the tune of a 3-0 beating. However, this was merely their riposte for our similar result in the same stadium ten days prior that had ended their interest in the FA Cup 1st Round business. As rejoinders go, it was like responding to a withering half-hour character assassination by saying “yeah…well…I know you are…but…but what am I” and blowing a raspberry that gets trapped behind your lips.

The Setanta Shield isn’t bad for a bit of prize money round-on-round, but it ain’t half as lucrative as playing a league club in the Cup on the telly. As we did. You may have seen it. Well, more likely you saw an advert and said, “well, I might chuck it on if there’s nothing else on. And we’re not going out. Or eating. Or we’ve got the Jenga out again. I love Jenga.”

However, like I say, it is October again, and this game was largely approached much like that FA Cup tie, with a sense of ‘well, whatever’ resignation that comes with following a side struggling in the league upon facing opponents from divisions above. 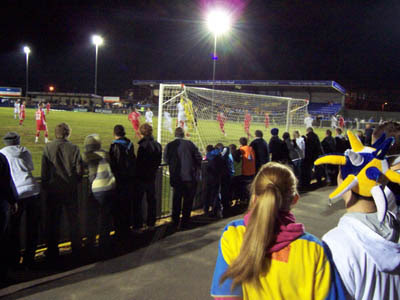 Yet it appears for all our woeful performances in the Conference South this season, Shaun Gale is a manager of make-do-and-mend. He clearly thrives on it. Last season we threw out XI’s in the FA Cup proper rounds that were so patched up they were virtually mummified. We did alright. For this game, new signings Paul Hinshelwood, Wes Fogden and Louis Castles were cup-tied or signed too late (for the original playing of this tie on January 31st anyway – this being the fifth attempt to get this game going, rain and snow scuppering the previous four). In addition Jamie Collins and Shaun Wilkinson were suspended (the latter on loan at Lewes at the minute anyhow) whilst Gary Holloway was injured.

As such, Ian Simpemba, who during ITV’s lengthy build up to our game against Brentford in the FA Cup, was seen having the piss ripped out of him by his team-mates in the dressing room for mistakenly saying to camera that he was a centre midfielder rather than a centre half, appeared, err…, in centre midfield. Wish fulfilment there it appears, and tactical masterstroke, by hook or by crook anyway.

Matt Gray slotted into a right back position that he has been known to play, but hasn’t been for us ordinarily, while striker Luke Nightingale played on the wing. Jay Gasson made a rare start in his rightful position of centre-back in Simpemba’s place, while the bench featured three bumfluffed Academy faces. So cobbled together were we, we had begun to look like a 15th century high street. 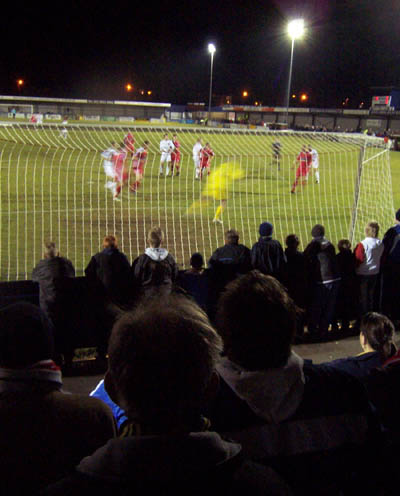 Despite this the first half was cagey, a few little openings here and there at either end but nothing major. Ten minutes before the break however, Craig Watkins latched on to Paul Booth’s through-ball, capitalising on Adam Quinn’s error, and hurtled towards the Crawley goal. With big keeper Simon Rayner coming at him as though in the midst of a haka-like war dance, and Craig having been known to blow opportunities of the type on a more then regular basis, we counted no chickens. However, rather than over-think it, Craig hammered the ball with the outside of his foot into the corner of the net; a quality emphatic finish from a player whose confidence grows week-on-week. Suddenly, the belief rose and although Kevin Scriven was required to make a save from Dannie Bulman five minutes later, we fans went into half-time with, that rare treat this season, smiles on our faces. Crawley manager Steve Evans went into half-time trying to fight people on his way down the tunnel, causing a flash of neon past the tea queue as our stewarding crew sped to the scene.

As was to be expected, Crawley came at us with successive waves of attack, keeping possession and generally making those of us behind their keeper rather nervous. It wasn’t until fifteen minutes from time that m’chum Simon behind the goal made reference to it being squeaky bum time but, frankly, my behind had been sounding like new plimsolls on damp lino since the ref had whistled to start the second half.

In the end, the two pivotal moments of the half occurred within two minutes of each other. Firstly Kevin Scriven punched a cross clear, only for the ball to fall at the feet of Bulman. He lifted it over Scrivs and it looked to be heading just inside the post. Then out of nowhere Jay Gasson, appearing to be auditioning for a role in a ’09 remix video of Carl Douglas’ Kung Fu Fighting and possibly screaming “aiiieeeeeeeee” speared his foot in from the shadows and made a vital block that will keep us doffing caps for some months.

Soon after, the midget winger Robbie Martin, on in place of the midget winger Charlie Henry, danced into the box and went over defender Sam Rent’s leg as though it were a late refusal of an abrupt steeplechase jump, with Martin being the jockey (to scale) and the leg being the horse. A penalty was awarded, and Luke Nightingale stepped up to repeat the trick of his first penalty against Chelmsford last month (and thankfully not the second) and jammed it into the very top corner, well out of reach.

Despite the two goal cushion, we had not the confidence to sing any songs concerning going to Wem-ber-lee until the final whistle had long since died away. However those, as well as a, these days, sporadic outing for Under The Moon Of Love, were bellowed joyfully, and the logistical planning for a trip to Yorkshire on five days notice was begun.

So, for the time being, until this weekend at least, we’re with Edward Fitzgerald. Hopefully though, the fact that we need only win two more ties, the first of which will be at York City this coming Saturday (a ground where, of course, we have previous), to get to the final, will not completely distract us from the fact that we rarely perform like this in the league. As a result of this we find ourselves two places and a single point above the relegation zone, with fixture congestion continuing to build up – and which would not be exactly helped by a two-legged Trophy semi-final on the two middle Saturdays in March. Certainly, a big Wembley day out will have a bittersweet taste if we’re facing up to Southern League football once again.