Another in the irregular series of the questionairre interviews I undertook with top flight footballers of the late 80's and early 90's that happened to play for Southampton FC. I was young, extremely sad and a Saint. It wasn't to last. Apart, of course, from the sadness, which clings to me like a winnet to particularly dense peri-anal hair.

This time out we'll go with that jungle celebrity, Glasgow kiss enthusiast* and sporter of ever increasing arse-cheeks, Neil Ruddock, who clearly had a fondness for using (and possibly sniffing) giant markers**. Ordinarily I would embolden the questions to set them apart but to fully display the visual impact of Razor's replies, I present them in bold and verbatim both in text and capitalisation.

*One of my most vivid memories of ocassionally going to the Dell back in the early 90's is of Razor applying some solid forehead to a Notts County defender's schnoz. Perhaps the most shocking bit of that sentence is the thought that having seen Notts County play in the top flight, I must now be getting on a bit. Eek.

**the dubSteps legal team have asked me to point out that the sniffing bit probably isn't the case. 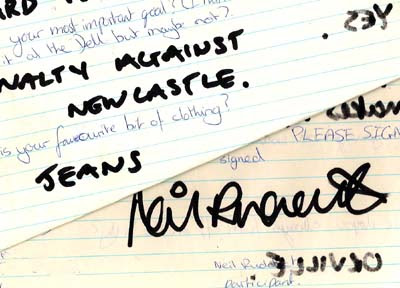 >What is your best ever goal?

>What is you most important goal?

PENALTY AGAINST NEWCASTLE [note: said penalty, which I witnessed live as a twelve year old, ended a run of twenty games without a win and started Southampton’s then traditional road to eleventh hour safety]

>What is your favourite bit of clothing?

>Did you collect autographs as a lad?

>How you won any proffesional [sic] awards?

>Were you desperate to leave Millwall?

>Do you play any other sports?

>Did you enjoy your time at Spurs?

>What is your favourite TV programme?

>Do you collect football programmes?

>Did you ever score for Spurs?

>Is it true that if Tim [Flowers] was injured you would be first to grab the jersey?

>Do you enjoy playing alongside Russell Osman?

YES. Because he makes me look handsome.

>Do you get on well with [the Russian players in the Saints team] Alexei [Cherednik] and Sergei [Gotsmanov]?

>Who do you always turn off on the telly?

>Have you stopped doing ‘the Stomp’ [Neil Ruddock’s trademark goal celebration] after you score now because you didn’t do it v Chelsea because if you have the[y] can stop marketing the ‘Stomp’ t-shirts outside the Dell?

>When does your contract come to an end?

>Do you have rows with [coach] Dennis Rofe?

Thanks Neil. See you at the Dell

Previously, on dubSteps.
An in-depth interview with Alan McGloughlin.
Posted by skif at 12:01 am