The Hootenanny Quandary. You know what I mean. It starts in mid-December as we desperately weigh up the agony of the remaining choices to decide on something – anything – to do on New Year’s Eve. Why do we do this? Simple, it is so that we don’t suffer the ignominy of being stuck at home with a microwave stroganoff, acquiescing to the settee and seeing in another year in the company of Jools Holland.

Now I like music, and have enthusiastically catholic tastes, but I find myself a little weary of the Jools festive format these days. There will be the gnarly bluesman with two guitar strings and even fewer teeth that everyone will decide they’ve always loved come January 2nd when Tesco take delivery (out of, like y'know, nowhere) of a job lot of albums and chuck ‘em on the shelves at loss leader prices. 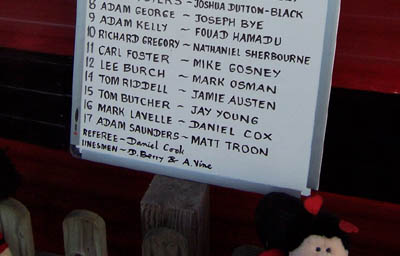 Then there’ll be the fly-away-haired band usually to be found swaggering around the backstreets of Shoreditch who presumably, immediately prior to the show, have been held upside down over the urinals by Jools’ gang of toughs until their sneery cynicism towards jamming in-the-round and the incorporation of a boogie-woogie element into their angular math-rock sound has miraculously faded away. Then Adrian Edmonson and Lenny Henry will be pictured in amongst the celebrity crowd both wearing faces that have fallen into a trying-to-remember-when-I-was-last-funny pensive droop.

Still, there’s me saying all this but, to be honest, I was at home with m’ladyfriend this New Years Eve with a curry and a DVD (resisting the temptation to flick onto BBC2 after 11pm just to “see who’s he got on this year”) as I had been for the previous three years. So why, you might ask, have I ripped into eclectic music programming as part of this article? 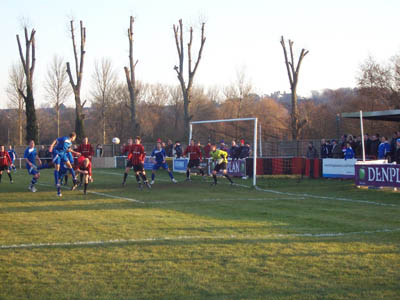 Well, it has been partly due to the fact this game in the Southern League Division One Scarf & Vest represents the end of my footballing year (58 games and 1 abandonment in it as it goes; my 2002 record of 72 remaining intact) and thus came the choices of how to see it out, which I shall come to. It’s also partly due to this game being of the too-much-Christmas-pudding/nothing-to-see-here seasonal snoozer variety. As the old saying goes, in the absence of anything resembling exciting football then, hey, the chirpy pianist is gonna get it.

So, given that United Services Portsmouth vs AFC Portchester was a much easier-to-get-to alternative*, why say goodbye to 2008 at Winchester? Well, our friend in ‘Stepping, Mr Ben, came across Totton on his travels at Didcot a couple of months ago, and reminded me of the presence in the Stags’ squad of one James Taylor, a proper Havant & Waterlooville legend (about whom I once eulogised on the Cheer Up Alan Shearer site). Some ex-players inspire this kind of interest. You’ll not see us organising a mini-bus for a trip up to Sheffield FC to see Vil Powell for example, but then again Vil managed 2 goals in a big 4 appearances, meaning Jimmy Taylor beats him by 136 and 293 respectively. 1 in 2 goal ratios are all very well Vil, but we like proper quantity (quality quantity, if you like) and, preferably, for players to stick around for longer than a fortnight. 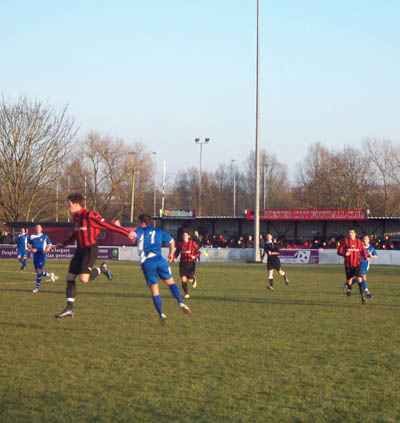 So, we came to see Super Jim then, and we could throw in Hawk Cup hero Phil Warner for good measure as he has also been playing a little beneath himself, if that's not disgracefully patronising, for Totton. One imagines the Stags are offering significant foldin’ money, by comparison, for this level if those two (amongst others) are happy to drop down. Of course, considering we’ve made a special trip out, neither Jim or Phil were in the starting line-up, nor were they on the bench.

Presumably with Totton at the tip of the Scarf & Vest, and Winchester holding up the rest like an ageing Atlas down at the base, the Stags were travelling light and had clearly forgot to pack a couple of bits. Actually it turned out Phil’s susceptibility to injury is troubling him again, out for a second time this season with a hamstring strain, while Super Jim was suspended, presumably for bookings accumulated for whining on and on at refs, certainly if his many years with us are anything to go by. 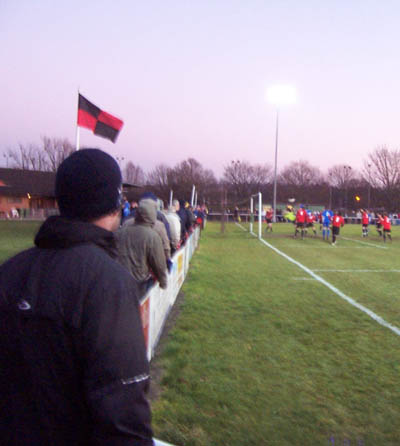 Totton and Winchester have had significant success in the last few years with both having reached the FA Vase final, Winchester beating AFC Sudbury in 2004 and Totton losing to Truro at Wembley in 2007. City merged with/absorbed Winchester Castle in 2001, were promoted out of the Hampshire League in 2003 and won the Wessex League twice before finally being able to make the step up to the Southern League in 2006. AFC Totton followed them into the Scarf & Vest two years later and are currently rather enjoying their first season, going into the New Year feeling confident about back-to-back promotions.

However despite this pedigree, the entertainment on the field was sparse. Nonetheless Totton’s supporters, flushed with success, kept up the singing, both behind the goal and, rather gracelessly, in the clubhouse with tunes like “we’ll never come here again.” Given Totton’s rapid rise, and the probable reasons for it, they would do well to heed the lessons of clubs like Cammell Laird who are now forced to field an amateur squad after four near-successive promotions from the West Cheshire League to the Northern Premier. Play it cool, chaps, is the advice. Mind you, a chant late in the game of “we’re shit and we’re top of the league” suggests they’re not so giddy that they can’t see a poor performance when they see one. 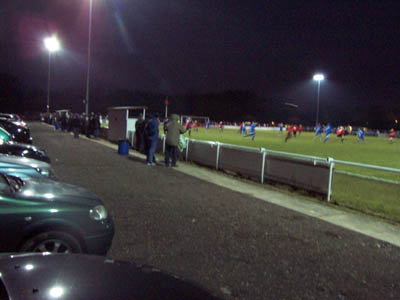 Not that Winchester offered much to excite the four teenagers behind the goal they were attacking, one of whom appeared to be, rather forlornly, tapping out the rhythm to Christine Aguilera’s version of ‘Car Wash’ on his drum. Totton were by far the winners in terms of possession, but neither goalkeeper had much to help them keep the bitter cold at bay.

On the touchline, all we had to keep us warm was the tepid, fetid coffee that we’d queued all the way through half-time for, only to have to wait a further ten for the urn to boil up again. Still, if one considered the coffee as installation art that represented the greying attributes of the football on display then, well, it was perfect.

I'll be travelling down (across!?) to the H & W v Lewes match on Monday with Cynical Dave and Big Deaks from the European Football Weekends website.

If you fancy meeting up for a beer along the way then let us know.

Unfortunately Danny I won't be there. With the prospect of extra time and penalties, my only way of doing it comfortably would be by car.

Sadly, I can't drive and my Hawk London Branch colleague, who can, is on his hols.

Still, I missed the 3-3 at Lewes as well to save a bit of cash, so I guess I just wasn't meant to see this round.

I'm saving my pennies for our big league trip to Worcester on Saturday week! Haven't had them in our league for a few years and its a fine old place.

No worries old chap. How is the drainage down at West Leigh Park!? I notice that the forecast from now until the big match is for thumping rain.

Anyway, keep on truckin' - yours is the best blog on the interweb by some distance.

You're very kind to say so Danny, thanks.

Drainage is better than it used to be, round the turn of the millenium, I think we played catch up with something like 17 games between 29 March and 3 May.

I'd advise checking as I'm never sure these days. If there's little respite, or its mostly on Monday, it might struggle. Hopefully not.