All photographs in this report are by Dave Haines – a man who has a proper camera and, very clearly, knows how to use it

Well, I’m pissed off. Why? Well, frankly, I’m sick of the world’s insistence on these new years that turn up having to follow each other in strict sequence. I quite fancied a bit of 3648 action, perhaps followed by a light dusting of 4 B.C. Perhaps that’s a little too much to ask. Not to worry, I’ll accept anything single digit, even Anno Domini, I’m not that fussy. Still, whatever you wish to call this year, and there is a strong rumour abounding that it is, in fact, 2009, there is no doubting that it retains its box-fresh tang. For now.

What are we to make of this march of time though? Poignant alternative rock types Death Cab For Cutie opened their 2004 album ‘Transatlanticism’ with the words “So this is the new year, and I don’t feel any different” and you can understand where they were coming from. Come January 1st and day follows night just as it did 24 hours previously (albeit heralded with a scanter amount of fireworks). Mind you, considering that by the third track of that same record Death Cab were waxing ostentatious on why glove compartments should not be so named, perhaps we would do better to slalom past their overly contemplative counsel.

However, all that said, now that it is a new year, I’m not sure if I do feel any different. In the sense that I really don’t know what to make of our club, specifically the team and management, as has been pretty much the case since August of, what is now, last year. Certainly, after three straights wins with ten goals scored against two conceded, one might reasonably be in a spiffy mood, but events of the prior few months have made us more wary of being recklessly effusive in our praise.

On the evidence of today’s first half, we have been wise to remain sceptical and guarded, cos after three games of turning up and doing stuff, we had clearly decided to phone this one in on the basis of feeling we could coast into 2009 on the coat-tails of Boxing Day’s performance. As such, despite a turn for the upbeat, we retain the right to question the management, but also to bow contritely when we speak too soon. 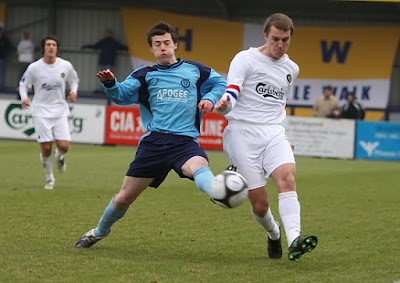 For instance the past fortnight saw some joshing on our forum about our club continuing to treat Brighton & Hove Albion like a cinema pick n’ mix display. A great many of our loan signings this season have come from the younger end of the Seagulls squad, mostly due to the fact that our assistant manager Charlie Oatway day jobs as a Community Officer down at the Withdean.

I remember when I was younger my great uncle used to visit every now and then and on departure would always shake my hand in such a way that a surreptitious fiver would be deposited in it. I can only imagine that after Micky Adams wished him a manly ‘Happy New Year’, Charlie walked off towards his car only to look down and discover a couple of sleeping youth team players nestled in his palm.

However, despite our increasing distrust of the club’s east-facing transfer policy, one of the latest down the pipe, Jack Compton, looks like he might have a little something about him, and was particularly good after coming on as sub in the Boxing Day hose-down. Starting this New Year’s Day fixture in place of an ill Steven Walker, he didn’t look quite as effective but grew as the game went on, a description that rather understatedly befits every single Hawk on show.

Not that it was difficult for them to get better as the game wore on, as the first half display was, as suggested, Christ!-is-it-November-again-already? in standard. Surely the dark days can’t have returned so soon, we thought, yet our entire starting XI looked as though they had had to be roused from the same ditch two hours before kick off having celebrated the hasty retreat of 2008 with rather too much gusto. That said the Bognor fans appeared happy to admit their opener, a penalty, was rather fortunate. However, given our equalising spot-kick on Boxing Day was softer than a shy embrace with Bagpuss, we should probably temper our umbrage.

The word is that Kevin Scriven had made a perfectly good save at the feet of James Fraser, but as the latter had gone over him like tumbleweed down a hillock, the ref pointed to the spot and showed a yellow card to Scrivs. Former Hawk Sam Pearce drilled in the penalty to the obvious delight of the Bognor turnout who, given their circumstances, were certainly generous in number. Mind you the same applied to our crowd, returning no doubt believing themselves to be on a promise for another festive feast, in goal terms. 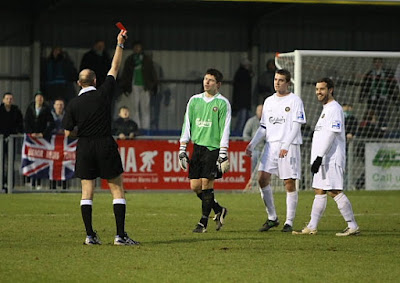 Goals they got but it was the Bognor mob who were next to be thrilled amidst the chill. A minute prior to half-time, Louis Castles scored a goal that was possibly the equal of Richard Pacquette’s for us in the corresponding fixture two seasons ago, a dipping shot from outside the box that would cast any keeper as the fool. Magnificent, not that I can delight in these things.

So, half-time and two goals in deficit to the league’s rock-bottom club; a club who today, due to Chris Tardif’s bout of flu, were forced to field a goalkeeper, Robert French, signed very very last minute on loan from Ebbsfleet United. Such an emergency case was it, I imagine Mick Jenkins had to break a glass box on the wall with his elbow to get at him. Although going that extra mile to don the hi-viz vest and advise people not to use the lifts probably wasn’t entirely necessary.

Needless to say, there was much grumbling about ‘application’ and ‘commitment’ at half-time. We wanted a little pizzazz, a little excitement to warm our icy cockles and, eventually, we got it, although certainly not to the extent of our best case scenario coming to fruition. Eight minutes into the second half, we got a goal back through Gary Elphick doing what he does best, getting his hard head behind a Charlie Henry cross and guiding it past Robert French.

Ten minutes later, however, it looked as though all our efforts would be for nought, as Kevin Scriven found himself tunnelled for a second yellow card. In a new move that he seems quite keen on perfecting and, who knows, someday he may well do, he came hairing out of his area after Stefan Gaisie had beaten Brett Poate, but caught the striker’s legs as Gaisie attempted a second circumnavigation. 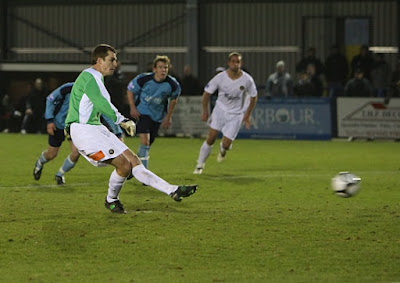 With our reserve keeper, and Pot Noodle enthusiast, Nathan Ashmore not amongst the benched names, captain Jamie Collins decided he should once again be the one to face the music. However Bognor’s symphony was fairly tranquil and JC dealt fairly comfortably with Sam Pearce’s resulting free-kick and also claimed a subsequent corner above his head like a career custodian. These were the rare sparks of life in Bognor’s stangely muted body as, pleasingly, we responded to the one-man deficit and lack of a recognised keeper by raining down fiery vengeance upon the Bognor goal.

Fifteen minutes prior to the scheduled end, Reuben French brought down Charlie Henry in the box and the Car Park End penalty spot was once again pointed at like a bearded lady in a supermarket. As the player’s convened a haphazard EGM to decide whom should take the kick, our skipper stepped up, striding from his goal-line with a purposeful gait like a zombie who’s gone weeks without any brain in his lunchbox. We confident types behind the goal began attempting to reason with his bravery and keenness by all shouting and gesturing back over his shoulder like an army of angry mums suggesting that he remove himself to his room without any further claim on supper.

Ignoring our all too apparent fear, JC, wearing the freshly-on baggy green shirt that was still humming Scrivs’ shame, wrestled the ball from Brett Poate and placed it on the spot. Having crashed the ball against the post from this very position not two weeks ago you might expect doubt but, quite clearly, Jamie Collins is a man with two mammoth spheres in his underbag. Robert French went the wrong way, and we were level. Captaincy may not have the same importance in football as it does in cricket, but Jamie Collins clearly takes the notion of wearing additional responsibility very seriously, and that’s why we love him. 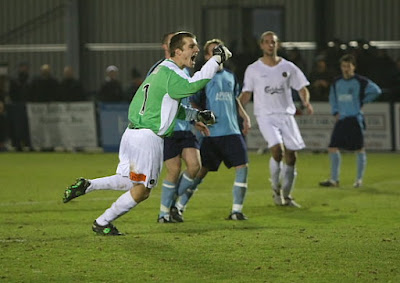 After that the ball rarely left the Bognor half, and chance followed chance followed sitter followed chance, Craig Watkins and Luke Nightingale missing the best of them. Indeed we should have had a second penalty, Rueben French swatting away one shot robustly rather like one does when playing swingball having misplaced the rackets. Any number of equally worthy handball shouts followed as the ball was fired repeatedly into the box.

Clearly seeing the benefit of playing with ten men, Reuben French then threw himself on the sword of a second yellow card. Yet, despite this, we continued to press on through six minutes of agonising injury time, adopting a far more attacking mindset than our friends from Sussex. However their new friend in the gloves made some vital saves whilst one cross-shot was brilliantly cleared over from a seemingly impossible angle beneath the bar by a desperate Bognor forehead.

When the final whistle blew it was difficult to know how to feel aside from relieved that no towel was thrown despite being two goal in arrears at half-time and our keeper mislaying himself with some time still to play. Yet, if we are to really believe that we can start climbing the table we need to see performances that consign the lethargy of the first half to the landfill.

"our equalising spot-kick on Boxing Day was softer than a shy embrace with Bagpuss" - I for one am glad that, although it's a new year, little has changed. Look forward to following H&Dub's progress (upwards, hopefully) in 2009.