It’s raining, the Hawks ain’t playing particularly well and, on the terraces, our Malcolm is dealing with his personal space issues by adopting a weightlifter’s pose to squeeze out yet another furious fart. Football is back. Proper football. You can smell it. Well, we can smell something, and it’s causing our support to part quicker than the Red Sea. It’s weird what you come to miss during the close season.

Speaking of summer, it’s been a pretty interesting one for us. There’s been cheeky beanos to the Channel Islands, Reading phoning us up to request an urgent friendly at a week’s notice (they all want to come down to see the Hawks these days) and our signing of 36% of last season’s Conference South winning Lewes XI at their club-takeover-whoops-change-of-plan-lets-give-instant-relegation-a-try end-of-season fire sale. Let us welcome Gary Holloway, Jay Conroy, Ian Simpemba and Paul Booth from Sussex then. 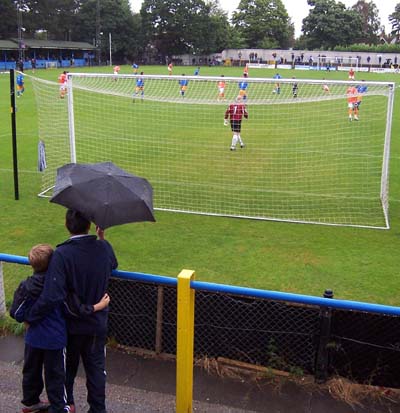 The latter shared last season’s divisional golden boot with Greg Pearson of Bishop’s Stortford, but has played no part in pre-season due to a persistent hamstring injury and as such we’ve been trying to work out our best attacking options throughout. We weren’t helped by the fact that our cult hero of the last three seasons, Rocky Baptiste, was out of contract, apparently considering himself worth a new wage well above the club’s valuation, and was geographically out of negotiation range. His whereabouts were described informally as “in the West Indies, apparently. We don’t know.”

I quite like the idea of Rocky, locked in a bump n’ grind groove in front of scuzzy, bass-heavy, dub-plate sound-system PA stack somewhere for three solid weeks suddenly going “oh shit, I’ve not sorted out a club for next season” before dropping his rum and running straight to the airport without bothering to pack, or even put a shirt on.

Despite his being touted around clubs such as Hayes & Yeading United and Eastleigh, he eventually came back to us a couple of weeks ago, saying he wanted “to play for these fans again.” A cap doffed in our direction there, possibly for us to throw money into, we’re not sure. While negotiations recommence, Rocky will play on a week-to-week basis in exchange for a cash n’ carry box of king-size Rizlas a week and, if the Danger!-Danger!-High-Voltage porn-‘tache he’s been sporting for the last three years is anything to go by, his very own love caravan in the car park. Please note: everything after “week-to-week basis” may not be true. Except the description of the moustache. Which is. 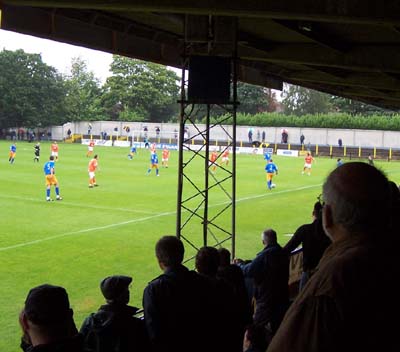 While striking issues have been causing concern, our confidence for the season has been mainly bolstered by the fact we have an embarrassment of riches at the back. Sorting something out between ourselves and Eastleigh so that Tom Jordan could finally make his dream move (arf!) meant a freeing up of wage-bill cash to allow us to add Simpemba, Conroy, Woking’s Jay Gasson and Brighton veteran Guy Butters to the already in-situ Jay Smith and Gary Elphick. Hear that purring? That wasn’t next door’s cat. That was us.

Midfield has also looked in decent order, albeit without a creative spark if we discount Charlie Henry. However, the day before this game saw us sign Matt Gray, another from Woking. Regular readers may remember me discussing a Matt Gray (here, here and here) who used to play for us (in theory) but followed Ian Baird to Eastleigh like a lost, and very bald, puppy. Thankfully, it’s not him. It’s another one. This one also has a high forehead, but is far from a total slaphead. This Matt Gray’s hair is arranged in such a way as to suggest he’s put it all round the back for safe-keeping, giving him a look somewhere between Bobby Charlton in the early 70’s and Lieutenant Gruber from ‘Allo ‘Allo.

Rocky, Matt Gray and another striker, Sam Gargan, loaned in the past week from Brighton found themselves on the bench, while we started with Luke Nightingale and Craig Watkins up front, a partnership that had not been exactly flourishing in pre-season. However that forward line, despite grumblings about the chosen pair’s goals-to-shots ratio, was not our main concern once we had kicked off. 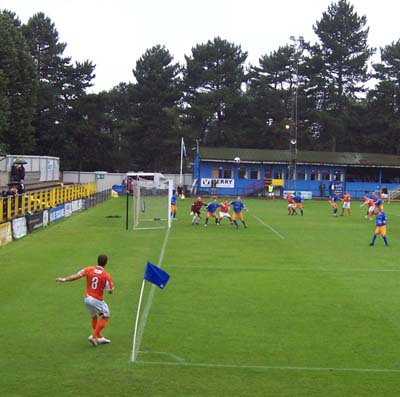 For all the talk of having “the best defence in the league” (always with the elliptical caveat: ‘on paper’), we found ourselves one down within two minutes, our backline looking as creaky and wooden as a pantry door in a haunted house. Looking down at my watch, the time read 14:59. Thanks to an over-eager ref, one can only assume our defensive unit’s inner alarm-clock was yet to go off and they were still rolled up in their collective duvet. Whatever the cause of the lapse, we still found ourselves a goal behind before the season had started, strictly speaking. As portents of doom go for a set of bookie’s title favourites, this one was steaming over the hill waving a big flag and playing reveille on an amplified bugle.

In the following fifteen minutes we saw not much else to buoy us either, at least not until Gary Holloway’s corner was cleared off the line by Scott Cousins as it curled in the direction of the net. Not long after Jamie Collins went for an all-too-rare long-range shot that beat Paul Bastock in the St. Albans goal but pinged against the inside of the post at just too broad an angle causing it to spin across the face of goal and away from danger. Craig Watkins also spurned a great chance having been put through by the impressive Holloway. However Hassam Sulaiman and Paul Hakim continued to cause our defence to go a bit wobbly and Kevin Scriven had to be alert throughout the first half. 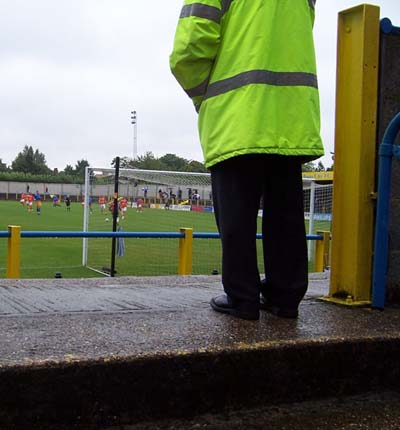 After half-time, we eschewed the protection offered by the cover on the side, and braved the elements in our more natural habitat behind the goal, possibly as an effort to suck the ball in, in lieu of strikers who can be relied upon to score. Indeed, it was only after Luke and Craig were replaced wholesale on the hour that we looked more on our mettle. Rocky, in particular, looked keen and hungry. Then again he always does when he’s playing for a contract. Note to the management: let’s keep him on the reefer-skins and sex-shack terms all season.

The equaliser, which we had come to deserve (but nothing more) came after 72 minutes. For the second time in the game we had upped the pressure with three successive corners, and the third one this time brought a mistake from Bastock. His punch only went as far as the collection of players on the far post and the ball trickled in after hitting one of them [see picture below]. Fortune favoured us today, clearly. It wasn’t entirely clear whether it had hit Ian Simpemba or City captain Ben Martin. 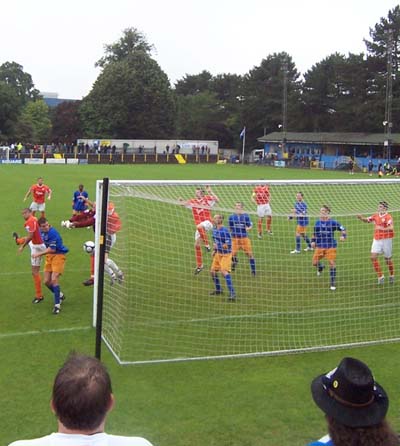 The PA announcer eventually gave it to Simpemba (after originally saying Guy Butters) but Bastock seemed to have his own thoughts, saying “I punched it into our fella’s arse.” I’d probably go with Ol’ Bald Paul, given that he had the, erm, ringside seat. However I imagine Ian will take it. After all, he’d scored in a friendly at Lewes the previous Saturday thanks to a keeper bitch-slapping a ball into his face. Clearly this is a gambit we’ve been working on during training.

Stalebuns man on the PA was clearly in playful mood, announcing not long after “today’s attendance. A season high: 522” and with parity restored we were in a much better place to enjoy the gag. Indeed, we arguably finished the stronger, with the anti-aging Bastock making a terrific flying save from Jay Smith not long after our goal, but certainly we’ll have to work on making better starts if we are to succeed in our ambition to win this league. Games come thick and fast at the start of the season so we’ll have plenty of opportunities, not least with two home games in the following week, to get some momentum going.

this website that you have of blogging is bloody brilliant

have spent the last 2hrs of my life reading it, pretty boring you might say but then again i do support eastleigh (which is quite unfortunate if you read this site!)

the way that tom jordan celebrated yesterday match at thurrock was a bit ott by the way, he definitely loves this club (insert lol,haha etc)

keep it up buddy

Very kind of you to take the trouble to commment Callum, especially given the amount of jokes that fly in the Eastleigh direction.

Nothing personal though chum, I'd like to think we can keep the rivalry relatively friendly off the pitch.