The fancy-dress that has become popular at provincial test match Saturdays allows the lazy hack to wax metaphorical about the fortunes of the England team. So here goes. Take the group of Baywatch lifeguards all clad in orange shorts and yellow t-shirts – just what was needed towards the end of South Africa’s second innings when it became clear that England’s bowling attack were no longer waving, but drowning.

Or we could focus on the troop of Amy Winehouses, all clearly struggling with rehabilitation despite wide public concern for their welfare. To their right in the Eric Hollies stand were several WWF superstars; Jake ‘The Snake’ Roberts, Hulk Hogan and, clad all in leather despite the humidity, The Undertaker. Perhaps the latter was here on official business. That though would possibly stretch the allegory of terminal decline a touch too tightly.

However it is clear that this test match saw the end of an era. Michael Vaughan’s captaincy has played a pivotal role in England’s recent success, taking the well-drilled survivors from Nasser Hussain’s boot camp and adding a twinkle of Brearley-esque tactical nous to a team that were attuning their cycles, like an all-female student dorm, towards the same peak. As is now clear, that peak (particularly for the bowling unit) came in September 2005. Injuries, retirements and a collective, no, national belief that the Ashes represented the acme of their potential achievement have, of course, led to a steady decline since.

As sad as Vaughan’s departure is, perhaps it will turn out to have been fundamental if Peter Moores is to create a successful Test team of his own, Vaughan being so tightly aligned to the Duncan Fletcher regime. However he leaves some very big shoes to fill, being the most successful and inspirational captain England have had in some years, if not ever, so it might be best to consider that the regeneration starts again from this point, and not focus it on Ashes contests, prior or forthcoming. 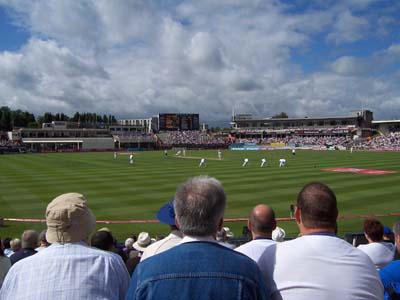 A need for greater consistency is required from the batsmen and more guile and determination from the bowlers but it is not as though a wholesale clearout is necessary as the current England side have certainly contributed to a thoroughly competitive and, more often than not, exciting series. This third test match was the most captivating we’ve had on English soil since the Australians were last in town.

Sadly, only turning up on the third day, I wasn’t witness to Andrew Flintoff’s vigorous working over of Jacques Kallis in the South African first innings, but it represented the start of a fightback, echoes of which would be felt throughout the remaining two days, and kept the play riddled with tension all the way up to around the last hour when Mark Boucher had settled in with the imperious Graeme Smith and the game was really up.

It took an hour and a quarter of the third day for England to clear up the remains of the South African first innings, although it might have been quicker had Paul Collingwood and Monty Panesar not shelled fairly regulation catches. Thankfully, Michael Vaughan was on hand to take a difficult one in mid-air, to restrict South Africa to a lead of 83 which, given the nature of England’s first innings collapse, might have been a whole lot worse.

A further capitulation looked on the cards when England found themselves essentially –13 for 3, the top order giving their wickets away so cheaply, it appeared Tesco might well be aggressively marketing them as a loss-leader. Alistair Cook and Ian Bell’s came as a buy-one-get-one-half-price twin-pack, both mistiming pulls that skied into the hands of a scurrying Mark Boucher, and were so inexpensive in terms of effort that Makhaya Ntini could have come out for the day without any foldin’ money, and still have enough of his shrapnel left afterward for his bus fare home. 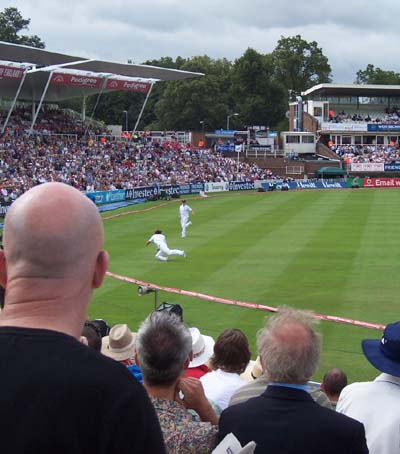 When Michael Vaughan came out, on a king pair, the atmosphere in the ground resembled that in a stuck lift containing only Graeme Smith and Kevin Pietersen. However he soon hit four glorious fours but, once again fell for a low score, popping an Andre Nel delivery into the hands of Hashim Amla at short extra cover, despite looking in good touch.

Nel is an odd one, his awkward bowling action resembling a filthy bearded tramp taking a meth-fuelled swing at a hanging basket. As does his overly pumped-up attitude, or rather that of his, almost literary, alter-ego Gunther. He is Captain Hook, King Rat and both Ugly Sisters all at once, playing up to the crowd’s antipathy, cupping an ear and conducting the chorus of abuse from the Hollies Stand. Unsurprisingly though Gunther doesn’t respond to their request for a wave, particularly as it follows a chant of “You’re shit and you know you are.” It’s not cricket, I tell you.

The ball boys were much keener to get involved, one having several long conversations with Makhaya Ntini as he fielded at fine leg (although it was the apparently socially-starved Ntini badgering the kid for small talk on each occasion), while another came scurrying onto the pitch when umpire Aleem Dar’s hat billowed towards the boundary like a hoop being manipulated by an invisible child with an equally imperceptible stick. Most were keen to give a “c’mon-give-it-some-more-noise” gesture in the direction of the Hollies Stand drunks.

It was a worthwhile gesture for just as the crowd had been instrumental in summoning up the atmosphere to accompany the bowlers as they tweaked the pressure, they were much needed by the batsman to get their confidence going, particularly at four down with barely a lead to speak of. As once might expect, Pietersen took this atmosphere to mean he was in the middle of a Twenty20 beer match, and had a couple of cracks at his switch-hitting as he took the attack to Paul Harris. 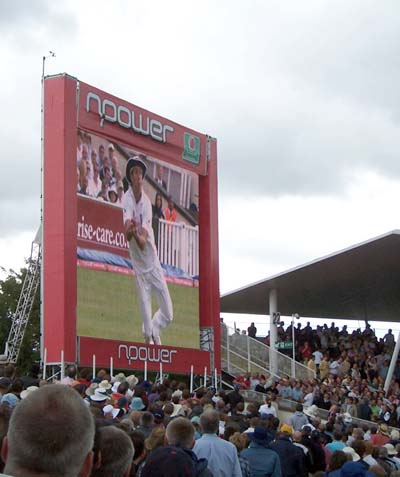 However he was eventually hoist by his own petard, his disdainful attempt to smack Harris over long-on to take him from 94 to three figures falling short and into the gleeful hands of AB De Villiers. Arrogant, perhaps, but we praised him for similar when he took the wind out of Australian sails at the Oval three years ago, and England needed the runs just as much here. His innings also allowed the out-of-form Paul Collingwood to settle through a nervy start, his confidence growing visibly as he attempted to ape KP’s gung-ho approach, crashing Morkel for successive boundaries with a clear swagger.

With KP gone, and Flintoff following swiftly after (possibly distracted by the streaker who decided a £1000 fine was cheap at twice the price for the chance to show 20,000 people his acorn-sized wang), Collingwood was the man who hung around. He may be a dogger, but he’s the people’s dogger. With his Test place on the line, a dreadful summer enveloping him like a Venus fly-trap and the game as taut as the Incredible Hulk’s dental floss, his innings was simply stunning, even just getting to 50 won him a standing ovation.

Eventually he reached his three figures, going from 94 to 100 with a six into the RES Wyatt Stand off of Harris which, given the manner of Pietersen’s dismissal, took cajones so large you could demolish a factory with them. Harris was later seen fielding on the boundary in front of the Stanley Barnes stand grinning like a goon at the hecklers, his smile saying clearly “I know Geoff Boycott and probably all of you lot think I’m third rate, and I might just have been clubbed for six, but I’ve got the wickets of your two best players in my back pocket. So do one.”

Both Tim Ambrose and Ryan Sidebottom stuck around a while to help Colly out, but Ambrose’s 19, even if it did take an hour and a half to compile, will ultimately be regarded as another failure. Sidebottom was another playing to exorcise the demons of another lacklustre bowling performance, hitting a few fours before offering a catch to slip that everyone in the ground, save the umpires, saw as clean; the TV ump once again erring on the side of wrong, based on the poor evidence that television pictures provide. Sidebottom, fully aware of recent history in this area, sensibly stood his ground. 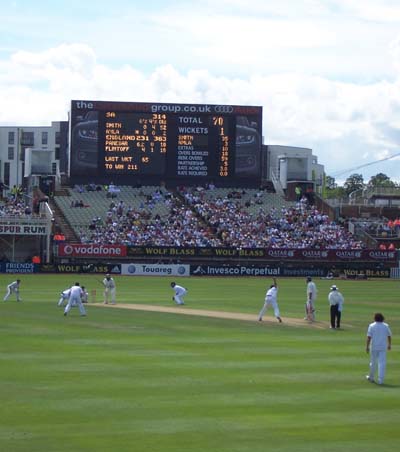 However it wasn’t long before Brian May eventually succumbed, for 22. Mistiming a pull, the ball flicked off his glove and spooned behind Amla at short leg, causing the fielder to scamper like a groom’s ageing spinster sister after the bride’s bouquet. Eventually Collingwood was the last man out, giving England a lead of 281 that seemed pretty unlikely when Ian Bell had perished the previous afternoon.

Initially South Africa were allowed to scamper away, before a flurry of wickets fell, Flintoff once more making Jacques Kallis his bitch, even if the South Africans were suggesting Freddie should credit an assist to the pavilion windows behind his arm. However, for all the thoughts of a collapse, with Flintoff still picking bits of cotton wool off himself in readiness for wrapping up the wearied and ineffectual Ryan Sidebottom in them, it was clear that an obdurate partnership would come and, indeed, South Africa finished off with two of ‘em.

First de Villiers with 27, then Boucher with an unbeaten 45 stood tall with their captain as he resolutely put together one of the finest fourth dig chasing knocks you’re ever likely to see. So as the Hollies Stand left their seats, first to join a conga line featuring eight Winehouses, fifteen Mexican banditos and seven cowboys on inflatable horses, and then to go home, South Africa took the extra half hour to put a tired and demoralised England out of their misery without having to all come back in the morning.

A disappointing result for those watching on as England fans, but both sides contributed to a tense, enrapturing game. English cricket moves on with a new captain and, although he might consider him a bit of a prick, Kevin Pietersen would do well to observe how Graeme Smith has grown within the role. One must respect the strength of Smith’s will, organisation and skill, and admire the fact that his team are able to follow so consistently in his footsteps.
Posted by skif at 12:01 am