Someone once told me that they had a friend who was a planespotter, and the reason that they had taken up this hobby was that they had simply run out of trains to spot. As going that extra mile for your interests goes, this would be the rigor mortis of hardcore, and we doff a hearty cap to that. After all, who am I to deride? Thanks to the Cup run to every which way last year, the Hawkmob London Branch are in danger of soon running out of major London rail stations from which to depart for games. Just need Cannon Street and Marylebone now for a royal flush. If this were a game of strip poker, someone’s south terminus would soon be feeling the breeze of defeat.

Happilly, of course, it isn’t. However it has made me think about the variety of methods in which I have got to H&W away games over the years: cars, of course; on foot; buses (both mini- and timetabled); coaches (National Express and Supporters Club); trains of many colours; taxis; and a catamaran (twice). Then, of course, there was the time we turned up at Tamworth on a Wednesday night in April during some particularly fierce fixture congestion with just four fans. When we had come on a skateboard, apparently.

Of course, there is one method we haven’t yet tried, and I don’t mean descending on Eastleigh with a fleet of Segways, either. We’ve been singing for years about the Hawks “flying high, up in the sky” whilst clutched tight to terra-firma by lovely old gravity. Finally we have spread our wings and taken to the air, courtesy a pre-season tour to Jersey. 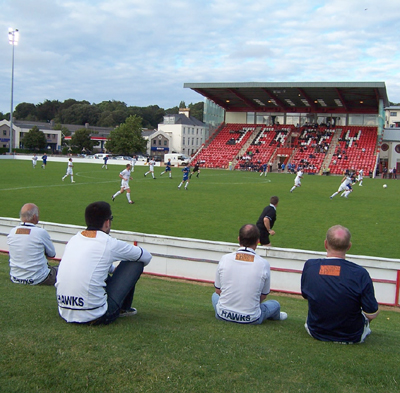 I have oft used my web mouthpiece, this y’er websoite, to decry the pre-season friendly as a concept for its innate insipidness. However stick a couple of ‘em on a handsome rock off the coast of France and I’ll be there quicker than my inner accountant can say “mmm, can you really justify the cost of all this?” Which caused a problem in itself. The dust had barely settled on the H&Dub homepage following the publication of some pre-season dates when the London Branch were booking flights and such. Probably should have read the bit beneath about dates being subject to change really. It’s like my great aunt used to say – “Skiffoid, always read the regular sized print, you acrid berk”. Gawd bless her.

Nothing was then confirmed for another couple of months, the plan to play a French league side in St. Peter on the Saturday proving a sticking point. It was then suggested that the Saturday kick off would be put back to the evening. Not ideal for a couple of London idiots who’d rock solid booked a flight back tight to the final whistle at 18:00.

Eventually our club sec, probably sick of my hinting (or rather badgering in the manner of Veruca Salt campaigning for her very own golden egg-laying goose), wangled a 14:30 start albeit not now against anyone French at the airport adjacent St. Peter FC ground, but a second game in St Helier. Still, Jersey isn’t exactly a huge land mass, all would be well – no need to change a thing. Probably didn’t need my agitated-man-on-sinking-cruise-ship routine through the best part of the summer after all. 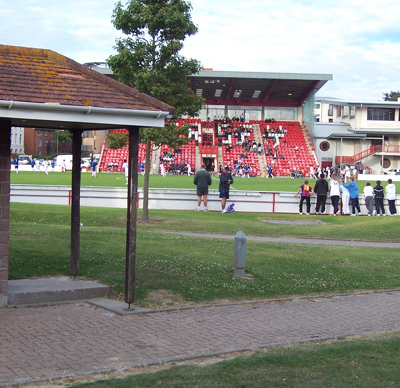 Still, after all that anxiety, necessary or not, to finally arrive in Jersey on schedule was such a blessed relief it took some restraint to stop myself tonguing the runway like an epileptic Pope with a tarmac fetish. We’s got our beano going oooonnnn!

However, arriving at Springfield Stadium for the first time, it was pretty clear that most of our support had been a bit more pragmatic about the whole thing and stayed at home saving their money for less expensive, more competitive action later on. I don’t have a lot of money, but I have even less sense, thus I’m here. I don’t think, therefore I am (sat on a grassy knoll that passes for terracing).

Springfield, as mentioned, is Jersey’s national stadium but has a public park and fitness centre within its boundaries and so, while fairly rudimentary save for a relatively gigantic main stand, the general leafy- and greenness makes for a pretty comfortable location for those who wish to combine their football with a little light sun-basking. Hawks on holidays: knees out, knotted hankie on. Bring on the leisure. 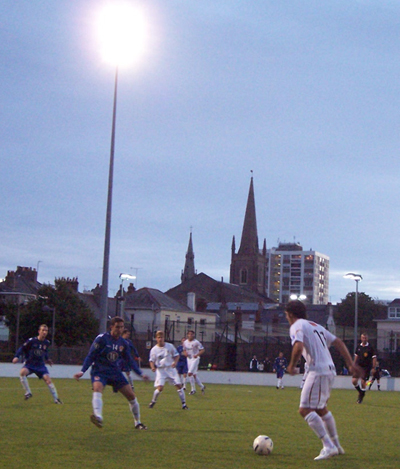 So you’ll have to excuse the six of us supporters present for not getting amongst the singing action. We might be here for the football but spiritually we’re asleep under a palm tree with a Dean Koontz novel perched on our face. Not to say that the opening game, against the National Rep XI, was without entertainment. It gave Shaun Gale a chance to experiment with a 3-5-2, us lot to have a proper look at our red hot new signings and, after twenty-five minutes of looking distinctly second best, a few goals by way of souvenir. First up was Gary Elphick with a dink off the freshly London Branch-sponsored bonce, followed twelve minutes later by Jamie Slabber sliding home a Craig Watkins cross at the far post. On the stroke of half-time Craig added a third, lifting the ball over keeper Craig Fletcher and tickling it slowly off the far post.

The second half was a much more even contest, illuminated by Slabs turning expertly in the box and lifting it over the keeper for our fourth and final on 57 minutes. With the game won, and the entertainment factor of seeing a Jay Conroy tackle taking out a linesman long past, we felt relaxed enough to introduce our fitness coach and stadium manager, 44 year old former Hampshire wicketkeeper Adrian Aymes, into midfield for a ten minute cameo. We wondered if our hosts might consider this to be us taking the piss a bit, until we found out that the Jersey squad for Saturday was to include Pat Symcox, Eddie Hemmings and the reanimated corpse of K.S. Ranjitsinjhi. Fairs fair n’ everything.

Mind you, to be a little nicer to him, Adi could well have been a pro footballer had cricket not taken over and it’s not like we were raffling off bench places to the drunks in the West Leigh Park social club. I remember watching Accrington Stanley playing a friendly at Harrogate Railway when I was stationed in Leeds and their gaffer John Coleman brought himself on for twenty minutes despite looking like a beer barrel on a piano stool. You certainly couldn’t accuse our fitness coach of not walking it like he talks it.

Whatever the rights and wrongs of the situation, we booed him on anyway. Money really can't buy committed support like ours.