The Thursday/Saturday combo meant Friday was freed up for some hardcore, hell-for-leather, what-goes-on-tour-stays-on-tour, boys-Friday-night-on-the-town action. Thus two rounds of adventure golf, a 99 cone, a gentle stroll round the Jersey War Tunnels, and a swiftly aborted attempt to traverse the increasingly ocean-licked causeway over to Elizabeth Castle it was. Believe me, we London Branch boys know our way round ‘avin’ it large.

In a random curry house stumbled upon later however it appeared we were the talk of the town, well I say we, “Havant & Waterlooville” being mentioned on at least two tables around us, and its not as though we were wearing anything to identify ourselves as Total Hawkmob to trigger any discussions. Indeed, considering both the BBC and ITV local news programmes for the Islands saw fit to show highlights from the Thursday night game, it appeared we were big news in some respects, if not others. 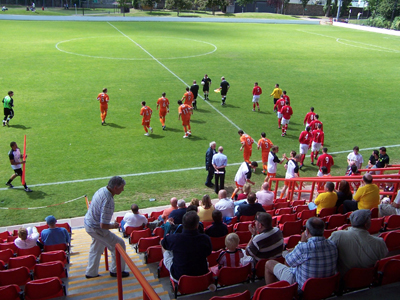 Certainly it’s not like the starriness of our attraction brought many locals through the gates, even if an extra four Hawks turned up to take the away support into double figures. Despite the coverage on the telly and in the Jersey Evening Post, there appeared to be no other mention that there was a game on anywhere, no posters, nuffin, not even at the stadium. If people had known it was a free in for both games, they might have popped down but then again, we’re not exactly the Harlem Globetrotters, with or without Adi Aymes in midfield.

Nonetheless, there was security on the gates for Saturday’s fixture, even if it didn’t appear they were taking money. Having got to the ground an hour early, we could easily stroll in anyway and proceed to interrupt a seven year old’s birthday party that was taking place in the bar. Indeed, there aren’t many grounds I’ve been to with the Hawks that have a local common-esque playground in one corner. However some kids beat me to it, thus preventing me adding “watched Hawks from a see-saw” to the list. Not that there is a list. That would be a little weird, albeit perfectly in keeping. Instead we loafed beneath the sun, weirding out the players by staring at them as they underwent their warm-up exercises under Galey’s command right in front of our once-again-commandeered knoll. 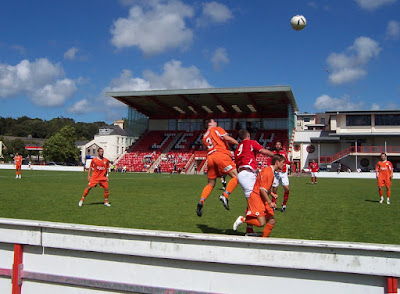 Word had it that the Thursday night opposition would be the slightly easier of the two, as the National XI could only pick Jersey-born players, whereas Saturday’s League XI could pick from anyone playing football on the Island. Some suggested it was be a fairly similar side, while media reports went further to suggest it was more or less exactly the same. It at least enabled another run out for David Le Roux, seemingly nicknamed Danny by his team-mates. At no point though did he respond to their pass-requesting cries of “Danny! Danny!” by shouting “wotcher mates” and breaking into a high-camp version of “I Am What I Am.” More is the pity.

After trying out 3-5-2 on Thursday we began with a more familiar 4-4-2 line-up for the Saturday game but looked a little lethargic suggesting either that they’d had it even larger than the London Branch, if that were possible, on the Friday night, or that they were merely trying to get through it with the promise of more beers and a Ruby to come. As a result it was Jersey who took the lead just before half-time, Barry Beatson hammering a corner past our keeper Kevin Scriven, now a vision in green after trying out his new bubblegum-flavoured-Panda-Pop coloured outfit on the Thursday. 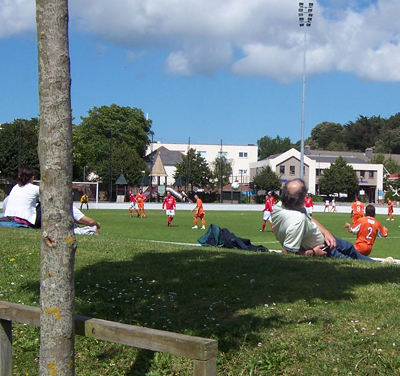 After half-time, we looked a little more at it, but it took the introduction of our big new defender Guy Butters on the hour to level things up, the chunky veteran tilting on his axis like a rusty swing-bridge within seconds of coming on and firing home after a Brett Poate corner and the subsequent goalmouth scramble. The BBC Jersey site suggested, whilst coming on a bit Officer Crabtree, that the goal was the responsibility of “former Tottenham and Brighton professional Guy Bitters.” Mind you we can’t say anything, some of us are committed to pronouncing our new man’s first name in the French style, despite the fact he comes from Hillingdon.

After that chances came at both ends with our claims for moral goalage arguable slightly stronger, however Craig Watkins and Luke Nightingale were proving as wasteful as we fear they may be in the season proper. Luke in particular is very much a man in need of some onion-baggage, especially given the fact he’s one of the rare players we’ve actually paid a transfer fee for.

Believe me, in his displays last season, he could have scored from six yards into an empty net, having leap-frogged two dodos attacking a pantomime horse en route, and people would still have been saying “Well, I never thought I’d see that. Luke Nightingale hitting the target.” 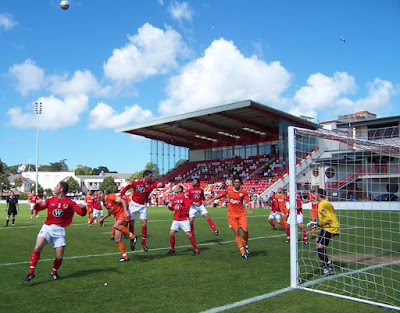 Certainly, we can feel quite confident about our defence, but our attacking options still look a little undercooked. I guess that’s what these games are for though and Luke can miss as many as he likes on a jolly, as long as he can make it count when one-on-one with Paul Bastock at St Albans City on the first day of the season.

Indeed that will be the next H&W action that DubSteps will bring to you, the remaining friendlies certainly lacking in locational intrigue. Hopefully by then we may have a better idea if this is a side we genuinely can believe in as potential title winners.