Chichester is not only a city, but one with a national profile, yet its semi-pro football club languishes, as it always has, in the County leagues. What it comes down to is that some cities just don’t quite fit the bill when it comes to football, the demographic doesn’t quite fit. When you consider the lack of an industrial base, the branch of ‘Oil and Vinegar’ and that a substantial part of Chichester’s imprint on the national consciousness comes from its theatre, it becomes quite clear that this really isn’t tattooed-fellas-barking-at-referees territory.

To give you an idea of its standing, just last year the Festival Theatre’s smaller space, the Minerva, gave a debut run to a Stalinist-era version of Macbeth, starring Patrick Stewart, which is now running on Broadway, via the West End. I saw it at the Minerva and it really was astonishing. You don’t come here for theatrical critique though, so let’s move on to Chichester’s other theatre, down at Church Road which had seen its own share of tragic drama just under a fortnight prior to this Easter Monday fixture.

As a result of a fire, the Church Road social club is now out of commission, which will certainly hit Chichester hard in the pocket in the short term, but they are putting a brave face on it considering they plan to move in the not too distant future, although this won’t be to pastures new, as such. This pragmatism didn’t stop a charred can of Diet Coke that had rolled behind one goal-net taking on a certain poignancy though. Chichester City United were formed only eight years ago through a merger between Chichester City and Portfield, and Church Road was originally the home of the latter. Owned by the council, the sale of the ground for housing will see money being pumped into a redevelopment of Chichester City’s former Oaklands Park ground. 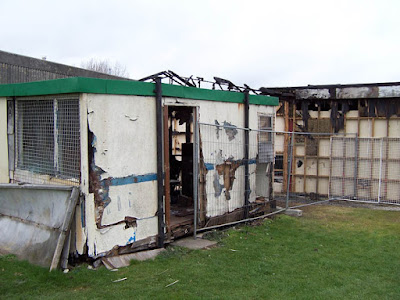 Chichester City United’s crowds currently average about 50, and it is certainly noticeable that today’s slightly higher attendance is mainly down to local rivals Arundel bringing a few supporters with them, not to mention a few H&W fans killing some lunchtime hours before the afternoon’s home game against Newport County. Part of the attraction for us Hawks to turn out is that Chichester currently have H&W’s Chamal Fenelon turning out for them on loan.

It’s been a difficult few months for Chamal. It’s not often that players at semi-pro level get their dirty linen washed in public, but it was Non-League Today that informed its readership that the reason behind Chamal’s loan-o’-round first back to Horsham, and then to Chichester, was that he had not only got himself into a little trouble with the law but that he had got a girl pregnant. A girl that isn’t the same girl as his girlfriend is. I grant you, this isn’t as revealing as say Paul Jewell’s home movies on the, err, ins-and-outs of Premiership management (incidentally when I heard about his famous column, I just assumed people were talking about him writing a weekly piece for The Independent), but it’s still more than you usually get in the gaffer’s notes in the matchday programme. 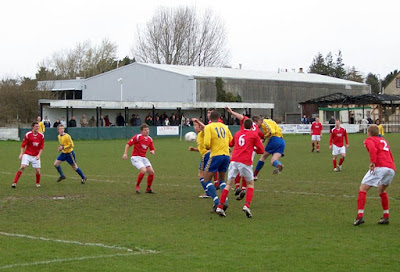 Perhaps programme sales would go up around the country if manager’s notes all began thus: “Good afternoon to all the players, officials and supporters of Friar Lane & Epworth, we hope you enjoy your day and have a safe journey home. So, anyway, Keith’s been caught dogging again…” Yes folks, this is the new role-playing game I’m going to patent, ‘Fantasy-Managers-Programme-Notes’. You can be yourself managing your own club, or you can adopt the persona of a famous boss and write as you think they might. Me, I’d be Mark Wright. “Afternoon everyone. Frankly, considering I’m strongly rumoured to be a big racist and I left Chester cos I’d been knocking off my captain’s girlfriend [allegedly - Dub Steps lawyers], I’m surprised you gave me this job at all. Nevertheless here we are, and I still think I’m in with a shout of getting us in the play-offs or, at the very least, convincing the physio’s wife that bumping uglies with a man that’s balding and ginger is definitely the way forward. Enjoy the game.”

Hopefully Chamal can come through his difficult time as he is the proud (well, largely unaware actually) current owner of the Dub Steps/Hobo Tread FAVOURITE! GOAL! EVER! award. This is to be distinguished from a GREATEST! GOAL! EVER!, as it was a scrappy old effort, but scoring an 87th minute winner against Eastleigh just before Christmas after all the capers we’d been involved in with them makes it a clear ‘favourite’. If I had to relive the feeling after a single goal, that’d be the one I choose.

Playing for Chichester, Cham looked as though he was indeed carrying a fair amount of baggage on his wide shoulders, alongside his big ol’ Laurence Fishburne-esque head. The talent was there, but the game focus was, understandably, a little wayward. As a result, despite Chichester fielding a player playing, at least, two leagues below his ability, it was not as big a boon as it might ordinarily be, and Arundel were able to pick them apart with relative ease. 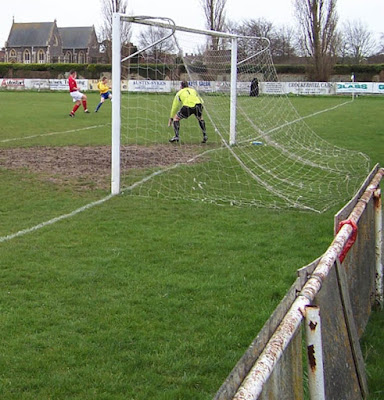 Cham did have an opportunity early on, following a slip by Arundel’s Josh Sutcliffe, but with his confidence a little low, rather than take a shot, he tried to poke it to Adrian Brockway, whose own shot was blocked. The rebounding ball was then stroked by Phil Archbold towards goal but tipped round the post by keeper Ben O’Connor. As a sign of things to come, from the corner, Arundel scampered straight up the other end, Howard Neighbour thrashing a crisp half-volley just wide.

Arundel were able to open the scoring not long after, in the 19th minute, a header by Neighbour creeping into the bottom corner. On the half-way line, Chamal’s shoulders offered a resigned shrug. Not that Chichester gaffer Adie Girdler looked much different, remaining pretty reserved throughout. His Arundel counterpart Richard Towers was much more vocal in his encouragement, shouting “Dave, leave it aaaht, ‘e ain’t werf it” at one stage, like a tottering town-centre slag.

Two minutes before half-time, Arundel doubled their lead, Josh Biggs steaming down the right, checking himself before threading a ball to Neighbour, whose shot hit the inside of the post and twanged in. They went a further goal ahead eight minutes after the restart. Neighbours shot was saved bv Chichester keeper Roy Emerson. Following up, Biggs took a touch before slashing the ball into the empty net. 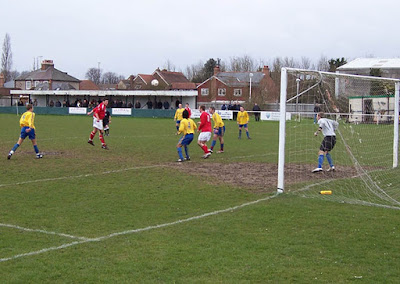 This advantage put Arundel in pretty good humour, left-back Josh Sutcliffe permanently chortling to himself, even when getting booked. His keeper did the same when he followed Chuckles into the book for calling the ref “Jobsworth!” when he is forced to retake a rolling ball goal-kick. On seeing this, Sutcliffe realised he may have a problem, requesting to this manager that “you’d better get me off, I’m going to get a second yellow for laughing in a minute.”

However his manager was also in bantering mood, shouting up the touchline to his substitutes “Oi, I sent you up there for a warm up, not a fucking chat.” “I’m telling them about my holiday” is the yelled reply. Before the half-hour, Arundel scored once more, Matt Huckett swung in a corner that Emerson flapped at like he was swatting away an irate crane-fly. The ball bounced up and Neighbour was on hand to head home from two inches out.

Chichester almost got a consolation but were adjudged offside. “Even I could see that” said the ageing linesman to the protesting players as though it had been all down to a combination of luck and guess-work up to that point. A comfortable win for Arundel then, but with little to play for in a league being romped by Crowborough Athletic, the West Sussex bragging rights will have to do.