When one goes about a journalistic plan such as following a football team’s quest for promotion, it is with the intention of their being a blaze of glory to provide the narrative peak. When you report on a chip-pan fire, you want the kitchen aflame; sirens wailing; fire-fighters wielding axes and a hose you could crawl through. What you don’t want is someone quickly on hand to snuff it out with a damp tea-towel.

Whilst our play-off pan smouldered for some time, the last couple of months of the season, courtesy a number of lacklustre, weary performances, saw the ‘mid-table’ tea-towel gently lowered to snatch away our oxygen. Indeed, we have looked a little short of a proper lungful for a while now, and so our play-off bid ended not with a roar, but with a submissive rasp, like the very last droplet of air creeping from the nozzle of a whoopee cushion. If Weston-Super-Mare’s 96th minute equaliser at our place didn’t kill our hopes dead two days after the Bromley defeat, then our 3-0 thumping at home by relegation threatened Maidenhead last weekend most certainly did. 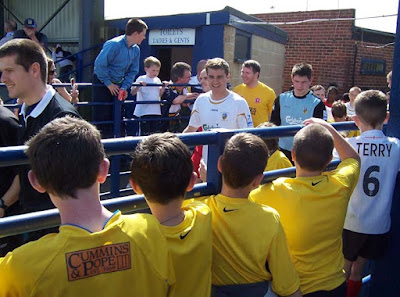 So, you tell a season-long story and hope for the happy ending or, if it is to be tragedy, then for it to occur with intensity and drama, as last year. Naturally, real life cannot always fit so snugly with the story you wish to tell. Besides, one man’s epic adventure is another’s laboured slog; for every gripping classic, there will be someone saying “geez, didn’t it go ooooon.

This season was different to last though, simply for the fact that last year we spent most of the campaign within the warm, reassuring arms of ol’ Mother play-off zone and were able to bat away our Conference South brethren as we competed for the comfort of her loving bosom. This year we managed to get a quick cuddle in September, but spent the rest of the time regressing to childhood, when we were all small, jumping up and down by her knees and tugging on her skirt, demanding attention but getting none. Clearly, we’d been wayward and mischievous in the eyes of lady league and have remained cold-shouldered for the rest of the season as a result.

Perhaps it’s because we spent several months ignoring her calls in for our bread-and-butter supper as we were too busy flirting with the FA Cup lass next door. Mind you considering that our knockout dream girl was giving out daily French, weekend tours beneath her jumper and, about every third Saturday, some crashing, athletic, physically implausible rufty behind her parents’ shed, I think we’d consider it to be all worth it. Sadly, come January, she went off with a bigger, fitter, rather more popular boy, but we’ll always have those winter months, and that’ll keep a smile on our faces for some years to come, I guarantee. Besides, we can always have our tea at the top table next year. 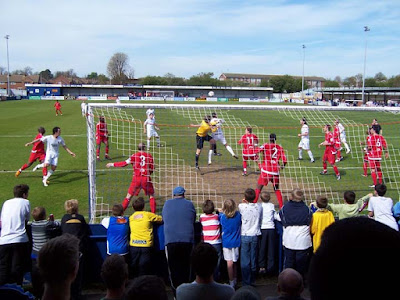 Indeed, for all the talk of damp squibs and disappointment, it would be distinctly niggardly to suggest anything other than that this has been our best season ever. It’s just that we had our epic adventure as a side-dish rather than as part of our main course. Put simply, this team helped us achieve our dreams, of being one of the 1% of non-league sides that gets a moment in so bright a sun as an FA Cup Fourth Round tie at one of world’s biggest clubs. Yet, for us regulars, that wasn’t really the best of times, rather the tip of a very big iceberg. Watching us beat a Football League club for the first time, and away from home, in the 87th minute, was truly astonishing, as was fighting back to snatch a draw with Swansea at their place. Frankly, after this year’s League One champions (eighty-odd places above us in the pyramid) were torn ruthlessly asunder at a packed out West Leigh Park, leading 2-1 at Anfield just seemed part of the same collective hallucination.

So, time to give back a bit of thanks then and, clearly, I wasn’t the only one wanting to treat this otherwise largely meaningless end-of-season game as a celebration. Often, when the last game is at home, the trick is to treat it like an away game and burst into the pub roughly two seconds after the landlord has withdrawn his key from the lock, and so it was this year. In addition, the fact that m’learned Hawk chum Shaun was celebrating his 40th gave us an opportunity to sponsor the matchball on his behalf and get some wining and dining in the club prior to kick off. Shirt and tie, even with the addition of a scarf, is not my usual get-up for terrace singing and Hawkbop, but you gotta do these fings proper, like. We are the prawn sandwich brigade, and we claim our half-time tea and biscuits. 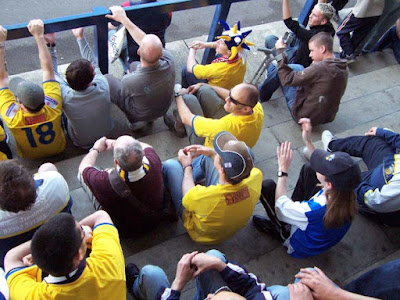 Once back outside, behind the goal with the proles, the warm weather certainly made for sunny dispositions all round and as the valedictory drinkage began to seep up to the synapses, we began the singing, and barely let up for the ninety minutes, which isn’t the usual way it works at home, to be honest. Although we don’t usually go in for anti- stuff, Eastleigh have become the exception to the rule, with some ‘sit down if you hate Eastleigh’ seeing many a Hawk bum plunge in the direction of the terrace steps [see pic above].

In addition, our tune-meister general, Ade, had added a few new verses to his call-and-response military marching song [hot-off-the-press lyric sheet being peered at by Ade through severely lager-impinged vision pictured below] so as to reference our friends from up the road, a couple of which being…

“I don’t know, but it’s been said
‘Ian Baird has a handsome head’
Well I don’t know what films you’ve seen
he looks like Shrek but he ain’t green”

Several versions of this have cropped up at games over the years, with the lines shifting to reflect current staff and our main rivals of the time. First version I heard was at my first ever Hawk away game back in 1999, when we played at Rushden & Diamonds in the FA Trophy and I can still remember some of the lines even now, bits about Banjo [Ben] Price tackling like a Stanley Knife and, my particular favourite,

…plus there’s one line from a version which I don’t remember personally, but have been told of since…

…which, frankly, should be referenced in all good football history books. You can keep your ‘You’ll Never Walk Alone’! 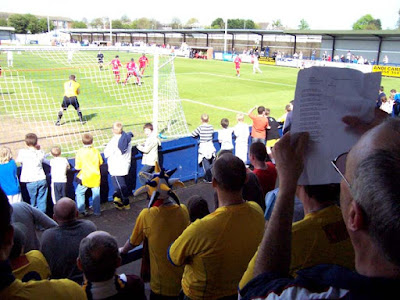 Ah, memories! I feel like I’ve been a Hawk-fan for long enough now to justify a little nostalgia. It doesn’t really work in the short-term after all - “ahhh lads, lads, d’you remember that time we all sang ‘Give us an ‘Aiiitch…’ at Bromley?” “Err, yes Skif. That was a fortnight ago.” One thing that is for sure, when it comes to discussing old times in pubs and club bars in the future, we’ll be referencing this season a lot.

Aye, it’s been a good ‘un, and we made our own fun to see it out in style, singing like it was a tense thriller, when nothing could be further from the truth. As an end-of-season game between two sides shielded both from relegation and promotion angst, it was largely the stuff of cliché, and it took Mo Harkin’s crisp edge-of-the-box shot cannoning off the bar to remind us that there was actually a game of football going on out there, amidst all the close-harmony singing. Our focus was largely on our bench, trying to goad our staff into a reaction. Even our physio, Grace, got a request to “give us a wave”.

Perhaps it was the knowledge that we were all peering over that put off our fitness coach Adi Aymes when he tried to collect the ball as it headed out for a throw-in, in the direction of our dugout. Misjudging the bounce, it missed his big hands and hit him squarely upside the chin. Admittedly he has a jaw-line you could chop lumber with, and so it probably didn’t throw him too much but, hey, someone copping a light one in their heavy-duty mush is always funny ain’t it? It entertained on several levels though, after all his failure to catch a ball as it bounced near his ankles, given his past life as a Hampshire wicketkeeper regularly touted as an England prospect, made it all the more amusing. 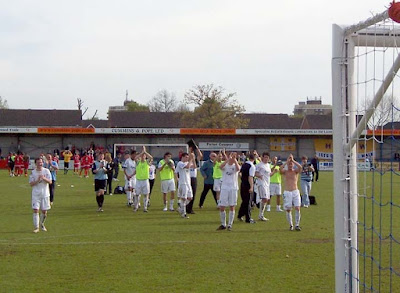 Indeed, for all the lack of edge in the game, when we finally did score, Charlie Henry deftly finding the gap between Welling keeper Jamie Turner and his near post from just outside the box with a fantastic pinpoint shot, we erupted. There we were jumping up and down and cuddling, celebrating like he’d scored a Cup Final winner, donated a grand to our beer fund and rescued a kitten from a burning treehouse all in the space of about, I don’t know, a minute. Well, why not, we were collectively, and without exception, in a good mood despite recent disappointment. Even when Rocky had a penalty saved two minutes prior to Charlie’s goal, it didn’t throw us a great deal. Well, if you’re going to miss a penalty at any time, and all that. To have something to properly celebrate is the ideal though and Charlie seemed quite happy about it too, going into one of his spectacular celebratory somersaults.

If a 1-0 win to close things out wasn’t enough to keep us jaunty, then the news coming through that Eastleigh had succumbed to a 4-1 defeat at Thurrock and thus, despite being in situ for several months, would miss out on the play-offs at the eleventh hour, most certainly was. The Beasts finished with a record of nineteen wins, ten draws and thirteen defeats, as did we, although despite us being better defensively, their goals scored record allows them to finish in sixth to our seventh. Still, their modus operandi did not see them prevail, and we can (albeit pettily) take that as our moral reward.

So, like I say, there really isn’t much to feel low about, and if the cup run cash is spent wisely, we must surely be amongst the favourites to win the whole show next year. Looking back to my final H&W piece of last season, the last line was certainly prophetic, albeit a little vague in its forecast. Being a fan of omens an’ all, and not wishing to alter a winning formula, I think it would be wise to close out 2007/08 in the same way. As such: “next year will be another to remember.”