Being that I’m approaching my 30th birthday, some might say that’s a touch too old to be writing letters to Father Christmas. However, my worry is, if he doesn’t know what I want, surely there’s a chance he might miss me out altogether. Frankly, I like presents and also I’m not sure I could take that rejection, particularly since the tooth fairy doesn’t appear to give a flying one anymore. Since my eleventh birthday she just doesn’t want to know. What a bitch. Shatters your illusions a bit. Like the time the News of the World had them hidden camera pics of the Easter Bunny nose-deep in a hillock of cocaine.

Anyway, not wanting to miss out on some decent pickings in my final Christmas before genuine adulthood (when I was a kid, I always thought that came with your twenties, but the fact that my student loans have still to be repaid and a number of house party streaks remain unapologised for, suggest emphatically otherwise), I penned the following note…

Do you remember when I was small? Do you remember all those times I told you, or at least that bloke who smelled of gin and mints in that tent in the Co-Op who looked a bit like you, about how I really really really wanted that particular present. That I was desperate for an item that I simply had to have?

Well, I realise now in the last days of my proper, rather than just partial, youth that I may have been a little over-zealous, a touch of avarice creeping into my Dangermouse t-shirted, square-fringed innocence. In hindsight, I may have been a bit hasty in asking for that set of drum pads. My old man did say they’d end up in the cupboard before the clocks went forward, and frankly I doubt they made an appearance past the Epiphany. Nor would I have made such a fuss about the Stretch Armstrong doll had I known he’d have been afflicted, relatively early in his life, by profound leakage from the armpits, nasty tacky stuff at that. It was as though the mental pressures of being a freaky-m’leaky-go-go-gadget-legs-circus-grotesque was causing him to profusely sweat out a light-duty adhesive. Not ideal.

What I’m saying, Santa, is that, where possible, I’m happy to chuck it all back; The Stars Wars stuff, the miniature wrestling ring and Andre the Giant figurine, the He-Man bedspread, Rick Astley’s debut album (ahem); even the fuzzy felt - all back in your sack mush, if, if you can sort me out with my pre-Christmas wish this year.

All I want, and I mean all, is for a H&Dub win against Nasty Eastleigh on the 22nd. That alright? Diamond!

Yours, with an empty stocking on my bedside table just big enough to fit three points in, 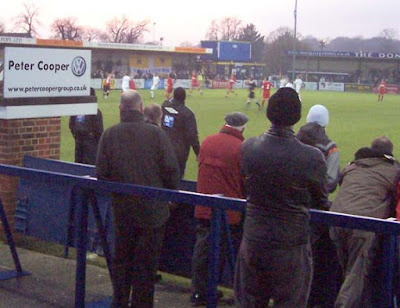 Regular readers of this site will probably have got a hint at the enmity building between ourselves and Eastleigh (not between supporters I should say - our ire is directed at their board and management) when I mentioned the manner of our previous manager’s departure in my sketch of the FA Cup game against Leighton. We were able to weather that storm though as, frankly, Ian Baird and the bench-crowders he took with him - Fitzroy Simpson, Gareth Howells and Matt Gray - have not been missed. However, the anger has boiled up again in the last few weeks as a ‘tapping-up’ saga has developed.

Right after the biggest win in our history at Notts County, Tom Jordan resigned the captaincy, thus making it pretty obvious that he now wanted to be freed from his contract to join Eastleigh, who had clearly been making overtures for some time. Part of the deal when Ian Baird left was that he would not come back to steal our players. The Eastleigh spin on this is that their director of football, Dave Malone, had been placing official bids and Baird had not been involved. Our player/assistant manager, Charlie Oatway, was outspoken in the press about Eastleigh’s unprofessional behaviour, which apparently included a text sent after the County game that said “well done – great result. Now can we have Tom Jordan for free”. Malone’s response to this accusation was to say “Charlie who?” 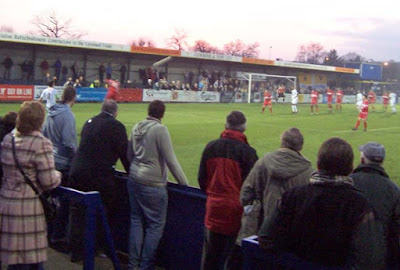 Of course, we’ve been in this situation before, with Weymouth on a few occasions, with wars of words and tapping up and all that, particularly when Steve Claridge was their manager. At one stage he had taken our recently sacked, Ronseal-coated joint manager Mick Jenkins onto his coaching staff, who then proceeded to unravel his sticky feelers back in our direction. I mean Claridge is pretty dislikeable at the best of times, always wearing the curmudgeonly, bitter demeanour of a war veteran that lost his legs to a mine, his folio of poetry to a trench flood and his wife to an American airman. However, this took our general dislike of him and indeed Weymouth as a whole to a new level and I remember them coming to us after all this on an Easter Saturday when they were top of the league and generally expecting to tear us a new, err, back pocket. We won 4-1. Suh-hweet.

However, I never really gone in for intensity in my rivalries, preferring to smile when they lose and generally just leave them to go about their business and for it not to be the end of the world should be lose to them in league fixtures. Yet Eastleigh’s cocky arrogance has really got up my nasal conduits the last few weeks to the point where I’ve been getting a bit Oliver Hardy-why-I-oughta-steam-billowing-from-the-ears frustrated with ‘em. I can now fully empathise with Kevin Keegan for that time in the mid 90’s, when he seethed, then said those immortal lines “I would love it, just love it…” before chasing a Sky cameraman down the road with the business end of a pool cue. I don’t think I’ve ever wanted us to beat a particular team in a particular match as much as I have with Eastleigh in this game.

As we drew towards kick-off, and players and staff of both sides emerged from the tunnel, the insults and cash-waving taunts began to rain down upon ol’ Bairdy, as he stalked grumpy and reddening across the pitch to the dugouts. That said, he always looked like that, whatever mood he was in, a bit like a boiled nipple. 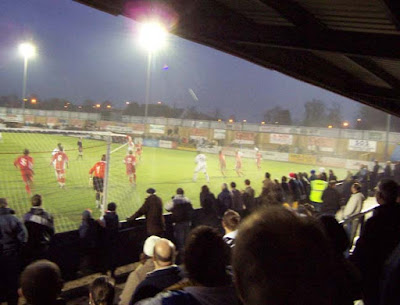 It didn’t begin particularly auspiciously with Eastleigh making a number of early chances, and generally we were struggling to make any headway in the game at all, second to pretty much everything and looking unsteady at the back. Losing Charlie Henry early in the first half was certainly no good for the nerves, and neither was an early mistake by debut making centre-half Gary Elphick (signed this past week from St. Albans City, the de facto replacement for Tom Jordan). On top of that Eastleigh’s Damien Scannell, about to leave for League One Southend in the transfer window, was certainly looking the part. However, he wasted his best opportunity to leave on a high, when he rounded Kevin Scriven but placed his shot wide.

Meanwhile on the touchline, Fitz Simpson was warming up near our end, and stripped off his training top to reveal a self-written t-shirt reading “See you soon Tom – EFC.” The fact that he felt the need to get it out at that point rather than while celebrating a goal/victory was, perhaps, quite telling of a lack of confidence, or at the very least it was a reminder, albeit a pretty redundant one, that Fitzroy Simpson remains a big boat of steaming bum-gravy. Best off rid, really.

Saves from Scrivs and a goal-line clearance from Brett Poate kept us on level terms, but as the match went on, we started to gain a in confidence, and to show some of the motivation that should have been a given considering some of the things that had appeared in the press. For example, Baird have responded to post-departure criticism of the anger and intensity of his management style from our full-back Justin Gregory by suggesting that if “you can’t handle it, go and play Sunday football for the Dog & Duck.”

Charlie Oatway however was clearly spurred on from the get-go by Dave Malone’s feigned ignorance and was immense in midfield despite only just returning from an injury lay-off, with whispers that the knee-knack that ended his pro career with Brighton may have also put paid to his brief non-league career as well. He may not be able to give us 90 minutes, but 70/80 like that every week and he’d be player of the season, cast-iron. 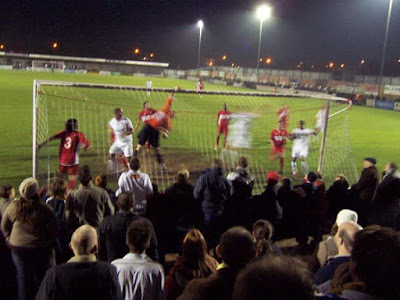 Both sides were missing glorious chances with Rocky Baptiste, continuing in a lengthy slump in front of goal, failing to convert a sitter midway through the second period. However opportunities were coming thick and fast, which they really weren’t the previous week in our 4-2 defeat away at Fisher Athletic, and all the players were stepping up. Charlie Henry’s early departure had meant Alfie Potter had had to cast off his Spiderman pyjamas and get into it, without any personal incentive to prove anything either, having come in on loan after the end of the Ian Baird reign of terror. He was just the ticket though, lively and tricksy and getting stuck in like a grizzled, veteran dogger. Indeed, despite being roughly the same height and weight as some our ballboys (or ‘my contemporaries’ as he refers to them), Eastleigh were having no success muscling him off the ball. With any luck, we can get an extension on his loan from Peterborough.

With chances going begging all over the shop, the game had 0-0 written all over it: a very invigorating scoreless but a scoreless all the same. However, a further substitution had seen our striker Chamal Fenelon, recently acquired from Horsham, come on in place of midfielder Tony Taggart as part of a slight reshuffle and, well, it certainly did the trick. Indeed around this time a mist began to quickly descend on West Leigh Park, like someone had started a fire in the drainage vents, but more indicative, thinking in hindsight, of the fact that something magical and mystical was about to happen.

With three minutes to go, Gary Hart (currently on-loan from Brighton) bombed down the right before sweeping a beeee-hyutiful cross onto the six-yard line. Then it goes to slo-mo in the memory (bit quicker with the magic of YouTube hindsight - see below). Big Chamal rising up for the header. Nodding it onto the floor. Eastleigh keeper James Pullen getting his fingertips to the bounce, but struggling to control it, like a 6ft tall plate spinner forced to perform with 9ft poles. Whilst on tiptoe. In a pair of childs rollerskates. On an oily floor. The ball falls behind him, but like trying to wrestle a giant cod he can’t get it back in his arms once it’s slipped from his hands, and only succeeds in poking it into the back of the net. Thus follows utter pandemonium all over West Leigh Park, “one-niiiiiiilllll to the Dog & Duck”; jumping around; embracing; “Jordan, Jordan, what’s the score”; BRILLIANT!

In short, it means a lot. Clearly Santa believes I’ve been a very good boy this year.