League clubs tend to have a very sniffy view of county cup competitions. In some counties, such as Hampshire, the pro clubs don’t tend to bother at all, whereas in others they opt in and opt out more often than a scratched 12” mix of the Hokey Cokey. It appears to work this way in Essex, with Colchester and Southend entering only when the fancy takes them. Not that I can get all righteous about that, considering H&W withdrew from the Hampshire Senior Cup, a couple of days before I sat down to type this, so as not to risk an already hobbling squad ahead of a run of vital matches in the FA Trophy, the league and the big Cup.

This decision could well see us hit with a fine and further sanctions even, as county FA’s are very precious about their senior competitions. So much so that, during fixture congestion, a county cup tie out-ranks a midweek catch-up league game in terms of playing priority. 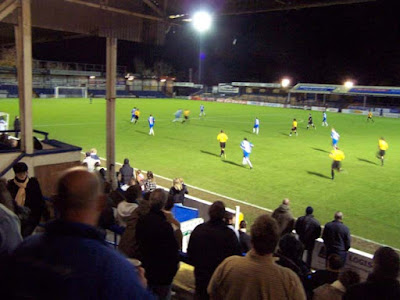 However, with its miniscule prize money and with any thoughts of prestige usually only to be found beneath the tweed trilbies of the more aging local support, it is less of a priority for the higher level clubs particularly, like I say, the Football League sides. It’s probably on a par with winning the Pontins Combination reserve league for them, if that. Colchester have engineered their own solution to the problems of fixture pile-up by pitching this game on a Thursday night, between Championship fixtures on the surrounding Saturdays as well as on the prior Tuesday.

As you might imagine, with that kind of pressure on the squad, the Colchester United on show for this game is not exactly full of star names, Teddy Sheringham probably preferring a night in his armchair with a blanket, a mug of Horlicks and the wireless to parading around a cold and far from packed Layer Road. That said, even without the plethora of league games, the team put out for this would probably still have been as youthful as the contents of Teddy’s little black book. 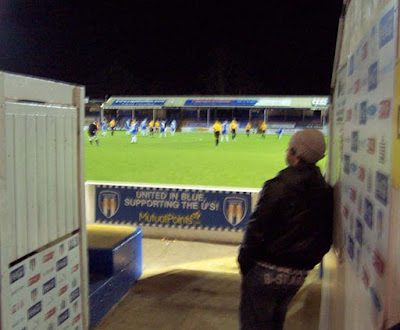 This is not to say that Colchester aren’t taking it seriously. They apparently had Stanway watched in preparation for this tie and reserve team gaffer Joe Dunne takes over the ‘In The Dug-Out’ style column in the programme to re-affirm that “I’m a great believer that in whatever cup competition you enter, you enter to win.” That a programme (thin, but full-colour) has been produced at all is certainly a tick in the effort box for the U’s, and the £3 in does me squarely in the wallet.

Dunne also appears on the back-page of the local rag, adding here that the Essex Senior Cup is “no Mickey Mouse competition” and that he is looking for “our players to stake their claim.” Certainly any experience the youngsters can have against more mature players has to be a plus. However, to say this side is just the spotties and the stiffs would be to do them a disservice as full-back John White, for example, has made 85 appearances for the first team, while much is expected of England under-17 winger Medy Elito. That said, only three players from the starting line-up would be considered ineligible for a run out in a youth league fixture. Yet, with seven divisions difference between the two, Colchester are certainly able to go into it with more than a kernel of self-confidence. 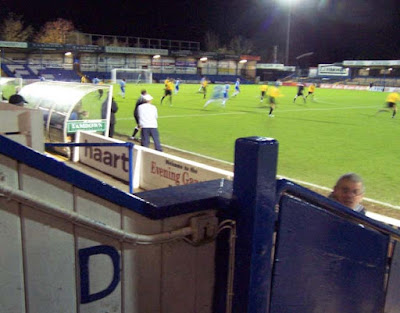 The word in both the programme and the Colchie Gazette from Joe Dunne is ‘respect’ and about treating their opposition with it. That’s an over-simplification though and it all hangs on whether they apply this ‘respect’ in an “I’ll have your daughter home by 10pm, sir” gist, or a more pressing dealing-with-an-angry-snake-in-the-cutlery-drawer sense.

Stanway have certainly made themselves a side not to be trifled with, having beaten Kings Lynn Reserves and Dereham Town 4-2 and 5-1 respectively in their previous two league games and while they’re not exactly lighting up the Eastern League Premier Division this season, the local derby element - there only being 3 miles between Layer Road and Stanway’s Hawthorns ground - will give them more than enough motivation.

The first half begins with Stanway working off their adrenaline, causing the Col U defence a number of problems, a free-kick hitting the top of the net, and a header from Mark Gainsford being tipped over the bar by keeper Jack Smelt. However despite all their momentum, it is Colchester who take the lead on 36 minutes, when Medy Elito latches onto a Fabian Quintyn pass and threads a ball across goal for Tom Webb to slot home. 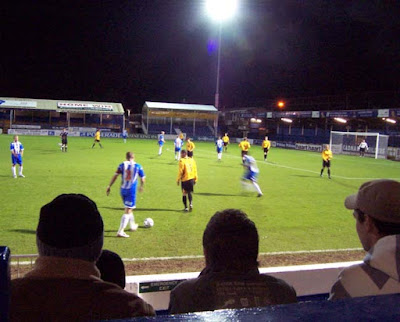 As in the first period, Stanway begin the second half looking all the sprightlier, but soon Colchester are imposing their full-time fitness, but wasting a couple of good chances. To punish them Stanway force an equaliser with twenty minutes remaining. Ray Turner, who missed the 5-1 defeat of Dereham to attend the birth of his daughter, celebrated the prospect of being vomited on repeatedly in the upcoming months by twisting and firing beyond Smelt. Two minutes later, Stanway had to be sharp at the back, Angelo Harrop hooking James Hammond’s header off the line.

Of the 508 people in a healthy crowd, a very decent percentage were there backing Stanway. They average 76 for home games and I would imagine all of them were in tonight and brought all their mates, their families and that geezer they’re on nodding terms with from the Legion. How can I be sure? Well, I’m basing that assumption simply on the roar of delight when Stanway achieve the virtually unthinkable, ‘Papa’ Turner popping up at the far post to slide home the winner.

Five minutes of steadfast defending later and there is another roar as the final whistle confirms a victory that will live long, perhaps longer in the history of Stanway Rovers than of Colchester United, but let’s not take away from the fact that this was no mid-July pre-season cones-for-goalposts knockabout. When teams of higher standards easily despatch lower opposition they often say “you can only go out and beat whoever’s put in front of you.” Even in this case, how true that is.