Since their formation at the start of World War II by construction and engineering workers under the employ of the Cricklewood based William Moss & Sons, Edgware have lived out a dignified existence, without much in the way of cloud-skimming highs or tunnelling lows, around the middle rungs of the non-league here at the White Lion Ground, formerly home to the town’s rugby club.

For a week or so in July, however, it looked as though their proud history would gather no further chapters as a statement was issued by the club’s board:


“With the recent purchase of the ground by Barratt Homes and the grant of planning permission by Harrow Council our main sponsor and benefactor has decided to withdraw their support with immediate effect, putting our lease of the White Lion Ground in jeopardy.

We must vacate the ground by the end of the year (December 2007) and with no alternative ground or ground sharing agreement available we will be unable to compete in the league and cup competitions this season.”

Considering that in 1984 the original wooden stand was a victim of fire, and that the White Lion public house itself was pulled down ten years ago to make way for a hotel, longer term fans may have felt another rapid burst of dramatic corrosion was due. The gaunt eulogies appearing on Internet fora however made it all too clear that a complete implosion was a fanciful worst case scenario playing out like an aging tree slumping on top of a bountiful greenhouse. 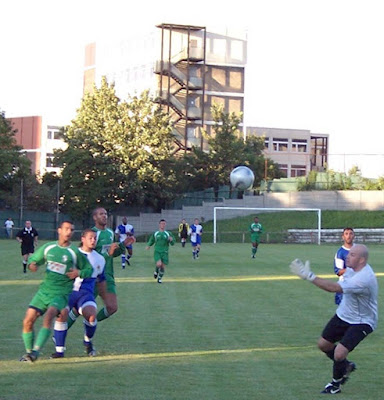 However, within a few days, the tear-moistened keyboards were soon being tapped at with a more euphoric zeal, as a combination of two noble acts of altruism allowed for a tearing up of their institutional suicide note. Firstly Harrow Borough offered the use of their Earlsmead ground, while the Edgware players also agreed to play for nothing for the entire season. Some still fear for the club’s long term survival, particularly in terms of attracting crowds as they will, after all, be playing six and a half miles away from their viable catchment area. Outside of London this might not seem that far, but with plenty of other Saturday options available, to lose the identity of being the town club situated, literally, on the High Street, is significant. Further concerns might be what happens when this team inevitably starts to break up, and how they will make any money without a social facility of their own.

Yet, at the heart of it, there still remains a fighting club with more than a merely traceable heartbeat; a club that can now make the most of the fruits of last season’s promotion from the Spartan South Midlands league to the Isthmian Division One (North). They will certainly look to teams like Wealdstone to see what’s possible, their opponents tonight having lived as nomads now for sixteen years. Indeed, Edgware’s history seems remarkably entwined with that of Wealdstone, not least because for ten of the latter’s sixteen years on the road, they were tenants at the White Lion Ground (after having briefly shared with Watford then Yeading, and before the move to their current base-camp at Northwood.) 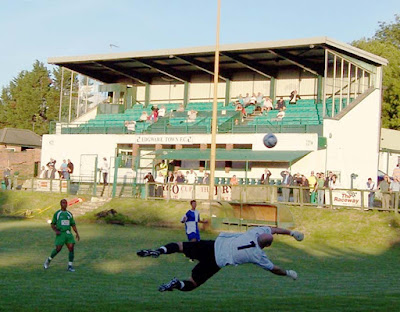 On top of the groundshare, both can also claim to have had old-boys in the 1990 England World Cup squad - Stuart Pearce starting out at Wealdstone (as did Vinny Jones); Edgware being the launch-pad for Dave Beasant’s career, a career which sadly pre-dated the invention of squeezy salad cream – while probably the two most significant matches in Edgware’s history came against the Stones. The White Lion’s record attendance (8500 approx.) came in 1947 in an FA Cup game between the two sides, and when the tie was drawn again two years later in the Third Qualifying Round, the game was shown live on the BBC.

A copy of that week’s Radio Times is printed in today’s programme. Ordinarily they might not bother, or at least put so much effort in, for a friendly, but with it being their former tenants turning out for one of six farewell shows at the White Lion, a pristine souvenir mag is put together for the evening. Friendlies remain friendlies though, i.e. not the biggest draw and, indeed, the attendance is at least half of what Edgware might have appreciated considering the close relationship between the clubs. Whoever has set up the cardboard boxes and sleeping bag along the far-side terrace also appears to have stepped out for the evening, possibly through the gaping, defunct turnstile just along from his palatial stack. Despite the areas of decay such as this and the two additional but redundant dugouts on the near-side, the White Lion is a handsome ground, one of the best of its type, and its imminent demolition will be a sad loss, and not exclusively for ‘Wares fans.

The game is typically reasonable pre-season fluff, both sides showing the laboured cut-and-thrust of a disillusioned tree surgeon a week from early retirement. The home side take the lead twenty-five minutes in, Junior Lewis going in hard on trialling keeper Dan Carr and heading firmly in. However a number of half-time substitutions disrupt Edgware’s unity, and Wealdstone manage to equalise ten minutes into the second period, a cross coming in from Chris Moore, headed back over keeper Rob Blackburne by Fergus Moore, the ball just crossing the line before Dean Papali makes sure of it, attempting to blow the roof off the net with a vicious welt. 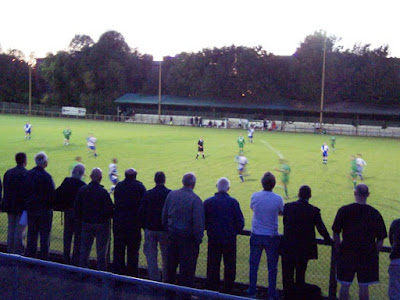 Edgware’s supporters are probably the more satisfied come the end of the game, but I guess it would be a little disrespectful for them to criticise their wage-less players too severely, especially at this stage. The home support can instead turn their ire onto local government, their hardcore of three amusing the subs in front of them with chants of “…and we hate Harrow couuuuuncil” and “You can stick your Barratt Homes up yer arse. SIDEWAYS!”

You imagine these three and a number of others will make the journey to Harrow every other week, but where the next generation of Edgware fans will come from will be of concern. Yet they may glance at Wealdstone and notice their comparatively sizeable and committed support, despite their protracted homelessness. That said, this should soon come to an end with a move to a new 5,000 seat facility which, to come to fruition, has been part financed by Barnet FC, as an adjoining smaller ground will house their youth and ladies sides.

So, clearly, money remains tight for the Stones, and their supporters are already predicting an onerous battle against the drop. So, while Edgware can take strength from Wealdstone’s continued existence at level three of the semi-pro leagues, they might also accept the warning that without their own land to exploit, life from now on may always be about fending off the dip into a downward spiral.