“Sitting around in their pants reading transfer speculation.” A friend of mine once offered me this image. I recall not whether he was quoting an article or plucking a vision from within himself, and nor do I remember the exact context. I imagine it involved the leisure activities of the generic male. It is an image I can empathise with, although naturally I have to rely on internet forums for conjecture in all its fervency, the ol’ Conference South switcheroo season not being a priority for the back pages of the Currant. Not that I’d read that demon rag anyway I hasten to add, so it’s probably just as well that I have to work with the web.

Neither do I sit around in my chuds while reading up on the merry-go-round either if I’m being honest. Girlfriends walking in on boyfriends hunched over a flickering screen wearing nowt but a pair of baggy ol’ Y’s and a look of eager concentration makes for a tense household, let me tell you. My ladyfriend will certainly be happier for me not putting her through that, but its moot anyhow being that I only have access to the Internet at work, though my colleagues appear similarly relieved at my fairly conservative choice of game attire. As might well be the smattering of fellow Hawks that make the trip across to the island tonight, as the opening of the pre-season friendly selection box is always solely about ‘the speculation’ and observing for oneself what it amounts to. As a result, our club secretary has to put up with endless enquiries from virtually everyone present that all boil down to one essential question – “’Ooz ‘ee?”, or more specifically, “Oi Trev, who’s that mush there, the 17, no not that 17, the other 17, on the right.” At this experimental stage, there clearly aren’t enough numbers to go round. 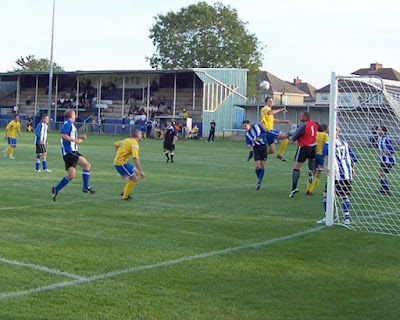 There is no joy to be had in pre-season friendlies other than catching up with chums (such as the Magellan-like Adrian, who's globe-trotting contributions to this site can be read here and here), having a trip out, and familiarising yourself with players old and new. After all, its not just about who is here, but who is not, as most summers usually sees a few depart or go AWOL in circumstances both fair and foul. At that happier end of the scale this year we have Mickey Warner who has quite reasonably left to join his wife and family. In Finland. Travelling expenses may well have been the sticking point. HJK Helsinki will apparently be his next port of call, and the very best of luck to him there. We’ll miss him, it was a rare novelty for us to have a genuine right-back playing both on the right, and at the back.

In the middle of the departure grumbling graph is Jefferson Louis, who came midway through last season and, frankly, wasn’t better than what we had, but nevertheless has conjured himself a move up a division to hook up with Weymouth. Considering our dealings with the Muff over the years, this may well be the transfer equivalent of slipping Polonium-210 into their picnic flask, we shall have to see. Then we have another player who remains in limbo, apparently holding out for a hero, that hero being a load of money, money that will preferably come from someone else. Our manager has been quite vocal in the press about refusing to bankrupt our club in chasing the promotion dream, so if players think they’re worth more moolie than we’re prepared to give them, the attitude nowadays (quite admirably) is, well, you f*** off and find it. If you can. 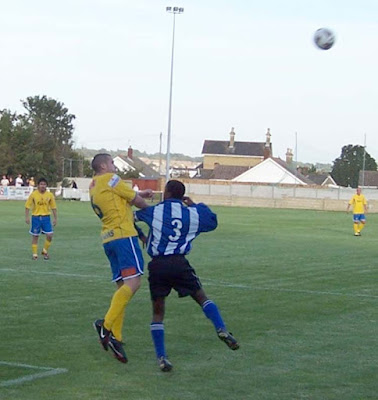 Another plus point is that we are able to field three cast-iron contracted signings in our starting line-up this evening. Kevin Scriven, a goalkeeper from Farnborough; from Swindon Town we've taken Andy Gurney, a veteran utility-man who knows his way round the inside of a ref's notebook (word is he's seen more red than a toreador outfitter's accessory box); and Jay Smith, a tall, strong defender coming in from Grays Athletic. To add to that, a similar number of trialists appear during the course of the game, including one tiny striker sporting the kind of pointy facial hair usually found on Japanese death metal bassists, who begins the match as “Brazilian, or something”, but gets up/down-graded to Chilean/Australian by half-time.

One tall lad, who plays most of the second half on the right flank looks particularly useful, especially in his exquisite pass for a newly shorn Rocky Baptiste to scalp it home mid-way through the second half. Rocky’s goal comes between two typically sharp finishes from Richard Pacquette which gives the vaguely-attentive away support something to cheer about. Not to loudly of course, we have to obey the laws of the pre-season friendly, as clearly set out here by our chum Twohundredpercent.

However, we are not here to treat our Wessex League opposition with contempt. Our friendlies have been chosen fairly carefully and as Cowes Sports gave a near full-strength Hawk squad a bit of a hairy going over in our Hampshire Senior Cup tie here last season, we come here for a decent work-out. One of the Cowes players in fact works us a little too hard and gets a straight red-card. The usual law of the friendly is for the ref to ask for law-transgressors to be substituted, but his crime was apparently deemed too heinous for that unwritten conceit to come into effect. 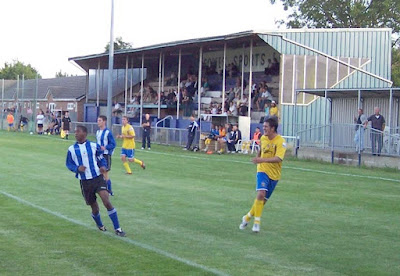 It’s hard, and foolish, to read too much into games like this, particularly when you have a man advantage, but pre-season should start this way; a gentle amble in an unpretentious setting is a necessary ramp-up to tougher pre-season challenges. After all, following this sea-crossing by only four days would be our yearly visit from Portsmouth, who are usually duty bound to stick out a few first-teamers at least. That might prove to be a little bit more of a challenge, but one that will hopefully focus our minds for a Conference South campaign where, for some reason, we have been made early favourites, despite oodles of cash being poured into other clubs such as Dorchester and Lewes.

So we are no clearer to knowing whether or not our wage constraints will hinder our title bid as yet, but the boat trip over to the Wight has given us no reason to feel in any way gloomy, and that’ll do for now, particularly as our manoeuvrings in the transfer market are not finished yet.