One might not expect to turn up at a fairly ramshackle ground near the most northwesterly inclines of the Metropolitan line and bump into someone who was the subject of your 10,000 word undergraduate dissertation. There he be though, drifting past me in the tea bar queue, leftie firebrand and director of leftist, firebrandist film, Ken Loach, the man behind Kes, Cathy Come Home and a myriad other realist films dealing with social and political issues from a working class perspective.

Well, actually, that makes it sound like some bizarre coincidence, or a real shock, which it isn’t really. It’s not like a ghostly apparition of Stanley Kubrick or Hitchcock had appeared beside me asking if I could sort ‘em out with a Twix. Ken Loach is, after all, a committed supporter of Bath City, arranging film festivals in the city for the benefit of the club from time-to-time. He’s never going to be a man all about glitzy premieres in Leicester Square, of course, but I imagined he might be off somewhere making a film about the Gulf conflict from the perspective of the ordinary Iraqi, or something, rather than stood between the dug-outs on a Wednesday night at one of the Southern Premier’s more basic grounds. 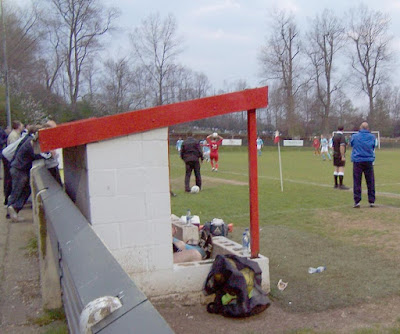 This, therefore, should mark-out our Ken as hardcore, if you can imagine a short, softly spoken septuagenarian steaming into the Northwood end. Not that Northwood really have an ‘end’ as a disappointing season means the crowds here are low. That said if you ignore the two games against their more greatly attended tenants, Southern Premier nomads Wealdstone, tonight is the season’s biggest crowd, topped out by a great many who had made the trip from the west.

Who can blame Bath, always a comparatively well supported club despite never playing in the Football League, from turning up in numbers when they have two hands, bearing in mind it takes about eight to lift it these days, on the Southern Premier Division shield. What keeps it tasty though is that prior to this game, they were nine points ahead of their tenants, Team Bath, in second place, with five games each to play. Being the University of Bath’s side, Team Bath, or ‘Team Tax’ as City followers put it, don’t rely on supporters cash, which is just as well as, naturally, they cannot compete with the history and tradition of their landlords, even if that history has taken a dent in recent years, the fallout from continued overspending in their Conference National days.

Team Bath, by contrast, are able to cherry-pick their students from the top academies, give them an education whilst also allowing them full-time training. Is it any wonder then that they should have rocketed through the pyramid in such a fashion? Should they win promotion this year, it’ll be their fourth in the seven years since they joined the Western League first division. Needless to say, of all sides, Bath would hate to chuck away such a dominant position to young oiks such as their local unwashed XI.

Tonight’s game represents an ideal opportunity to place someone else’s hand on the championship trophy, the first chap teetering a bit under its weight, bearing in mind this is a clash of top against bottom with Northwood who, if they aren’t quite dead yet, then certainly are being moved against their will into a hospice. That said, a bank holiday county cup win on penalties against Hayes two days prior might have been a shot in the arm for them, albeit with a sapping of the legs coming with it. Bath, however, had a tough home derby with Chippenham, in front of 2,044 to contend with the same day. You might imagine then that this game would not exactly be rapid, end-to-end stuff.

As stated, Bath are here in number and they congregate early at the social club end with flags and a few black and white balloons. One chap starts up his own chant for the benefit of one of the substitutes warming up. “Darren, Darren, giz a wave…[gets wave]…’RRRRRaaaayyyyy-ah.” So well does he feel this has gone, despite remaining unaccompanied, he has another bash, seemingly to the same player. A chant of “We ‘ate Chipp’num and we ‘ate Chipp’num…” sees many more grasp the choral nettle.

In the first minute, Northwood surprise Bath with their momentum, Dwane Williams lobbing a quick shot just wide of the far post. Bath’s first decent effort doesn’t follow until the quarter hour, as Northwood keeper Bill Fishenden spills a speculative shot from Chris Holland, but he is quick to leap at the feet of the on-rushing Scott Rogers. Not long after Northwood’s Danny Murphy barrels through on the left and tests the sting resistance in Bath keeper Paul Evans’ gloves. To show their support, a ground of kids sat on top of the fence behind Evan’s goal clatter their heels in unison against hoardings. 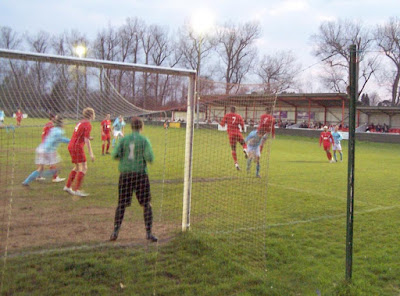 Just prior to half time, Northwood gain a free kick on the edge of the box, Wayne Carter curling it over the wall, but Evans pulls it out of the air as though pulling down a rogue Tesco carrier bag from his seven-foot high, back-alley washing line. Bath have a further chance, probably the best of the half, before the whistle goes. Lewis Hogg flicks the ball up, Martin Paul heads backwards toward the far post but the clearance is made for a corner. From that, Chris Holland rises tallest at back post but keeper is well stationed to palm away. From the next corner, Mike Green tees up a handsome shot but Fishenden collects it with a dive.

During the half time, Bath collect themselves on the bank at the far end, behind which lays a cemetery, “lets get down there and try to raise out spirits” suggests one Bath fan. It is not a plan that works that well, as within three minutes of the restart, a spirited Northwood take the lead. From a corner, Wayne Carter gets the ball and with the bridge of his foot pokes it in via Matt Coupe’s thigh. Five minutes later, with a visibly more interested Bath pushing forward, Green crashes a shot off the near-post, the ball flashing across a goal well protected by several Northwood bodies.


The momentum clearly now with City, Martin Paul has space to fire in a shot from twenty yards, Fishenden palming dangerously into the six yard box, but Bradley Hewitt’s foot gets there first to stab it away for a corner. For the next twenty minutes, the home side are able to hold on valiantly and look as though a great escape three-points may well be on. However, with twelve minutes remaining a Bath shot crashes into Peter Dean’s arm, and the ref is quick to award a penalty. Lewis Hogg steps up to slot it into the keeper’s left hand corner, just out of his reach.

In the final five minutes, both sides have chances to win, Dean going close with an acrobatic scissor-kick, and Bath sub Matt Prosser seeing a looping header drop just over the crossbar. It finishes all square though and far from ideal for either club. It looks even more certain though that Northwood will drop into the Southern League’s South & West Division (or possibly into the Isthmian North if there needs to be a shuffle), while you’d think Bath couldn’t possibly throw away the opportunity to join the Conference South for the first time since it’s inception three years ago.

ADDENDUM (23apr07):
Written over a week ago, the expected scenarios have indeed come to pass, with Bath winning automatic promotion with a 2-1 victory at Yate, while Northwood's 3-0 defeat at Rugby Town consigned them to relegation.

Great to know Ken draws his inspiration from the classics.

No link to Margate FC. Disgraceful.