sixth in a series of despatches from the play-off push

This past Friday, a documentary providing an overview of Noel Scott Engel (a.k.a Scott Walker)’s progression from teen idol to reclusive sonic adventurist of the musical avant-garde, was put on limited release in British cinemas. I went to see it. We all have our ways of preparing for the final whoosh of the play-off push. I imagine the Havant & Waterlooville players spent their Friday evening perusing through art galleries, reading at open-mic poetry nights or something. Perhaps Neil Sharp primed himself for 90 minutes of roughing up Fisher strikers by sitting back in a theatre seat with two clasped index-fingers pointing tautly into his bottom lip, a single tear dropping onto the lapel of his jacket as he appreciated the subtexts of ‘Uncle Vanya’. 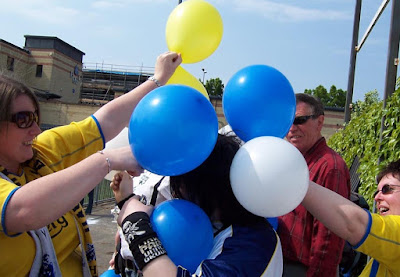 Players of other sides might have subsisted on a chow mein and the Charlotte Church show. Not our boys, of course, ours are a more cultured breed. Well, maybe yes, maybe no, who knows (and it would be prejudiced of me to suggest that the possibility of the above categorically did not exist) but watching that Scott Walker film did get me thinking. We really have taken a kind of avant-gardist approach to this whole play-off issue. A steady, almost ambient start, then some semblance of a cohesive melody, before a heap of blips and glitches appeared from nowhere and threw the projected scheme of things into chaos. Certainly, we’ve not made it easy on ourselves, going up being so very hard to do. Ahem.

The play-offs were our target and for only 16 days out of the last 159 have we not been in a play-off position, but these last few weeks have seen us stagger, spurt and stroll our way towards the finishing line. The home win against Yeading put us back on track, and that was followed by a further emphatic home win (3-0) against Thurrock last Saturday, while Tuesday saw us at second placed Salisbury, with neither side assured of the play-offs. 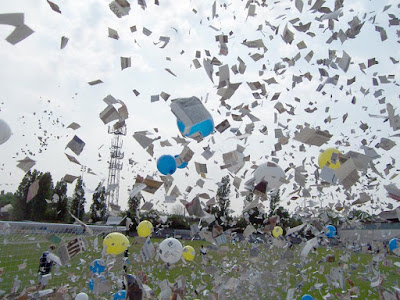 A draw was enough for Salisbury to seal their place, and that’s what they got, and it’s a result we’d probably have taken before kick-off. In those dreams, however, we might not have walked with the idea of our equaliser coming in the 92nd minute, but thanks to Richard Pacquette that was how it came to be. Scenes of jubilation amongst a high turnout of travelling Hawks were on a par with those when we pegged back Millwall to one-each in the cup last November. Or so I’m told, not being able to make it n’all. Bum.

So, after Newport County lost to Eastbourne during the week and Bishop’s Stortford only managed a draw at Eastleigh, the final day meant it remained in our hands. Win and we’re there. Draw and we’re there, assuming Braintree, Newport and the Bisht’d don’t all win. Lose and we’re there, if only one of those three win. So reasonable odds then that, regardless, we would make it. Clearly the travelling Hawks thought so, making up at least half the crowd, bearing in mind Fisher never attracted that many in their own currently under development Surrey Docks gaff, let alone down the road here at Champion Hill, as paying guests of Dulwich Hamlet. Some enthusiastic littering generates a ticker tape welcome for the Hawks, plus a sweat-shop of balloon-inflation brings even more colour, over and above our increasingly Ultra-like display of flaggery. 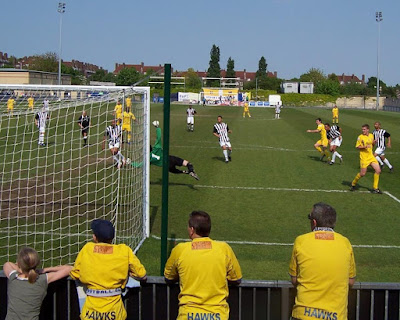 However, while Fisher might be mid-table fighting for squat, that paints a false picture as there has been major upheaval there during the season. They came up last year and started this campaign as the only professional club in the division and thus favourites to return to the Conference National, having spent four years there between ’87 and ’91. The financial reality of that though, in the face of no ground and few fans amongst other things, forced a reigning in of spending and a departure for then manager Justin Edinburgh.

Still, there are those that keep the faith. As we are forced to change ends after the toss, our six or seven flags remain at the car-wash end, in front of which stand the Fisher behind-goal foursome, one of whom waves his own black and white chequered banner in a semi-relaxed manner that is less tense-finish-to-a-Grand-Prix and more shaking-crumbs-off-a-picnic-rug. Still, that being the hot end you can hardly blame him for a lack of gusto, but certainly admire him for the fact that he bothers at all. Meanwhile, we bask in the first-half shade, but remain all-aglow with confidence. 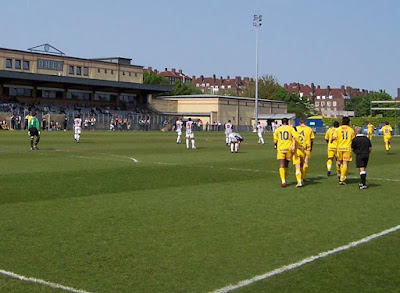 This confidence is certainly unharmed by Brett Poate’s classy 13th minute finish [see picture above], although it takes a bit of knock when Fisher hit back three minutes later via Gavin Tomlin, who proceeds to put in a further dent with a very decent finish ten minutes further along. Nervously checking the Conference South live-score updates on net-enabled phones becomes the order of the day, until first half injury time sees Messers Pacquette and Taggart combining to leave Brett free to complete a brace of his own.

Come the second half and with both teams wilting a touch, Fisher shake things up on 72 minutes as Ashley Carew makes the most of keeper Gareth Howells rustiness and apparent injury (no keeper on the bench with regular #1 Shane Gore still injured) to slot a sublime shot from the edge of the box inside the near box. Thankfully, whilst we might have troubles between our sticks, we have a mole between Fisher’s. Paul Nicholls, a Hawk between 2000 and 2002, gives us some much appreciated charity, as a hasty clearance hits our skipper Tom Jordan and fortuitously drops to Jamie Collins, who cuts inside and places a shot into the centre of the net and thus out of range of the chasing back defenders. I’m sure he’d have preferred not to help us out, but we’ll take ‘em any way they come. Cheers Paul. Being appreciative, friendly types, we’d have offered him a drink in the bar afterward when he came to say hello but, who knows, with the Conference’s Stasi-like eyes and ears everywhere, probably best not to raise unwarranted suspicion. Well that and the fact that we’re tight. 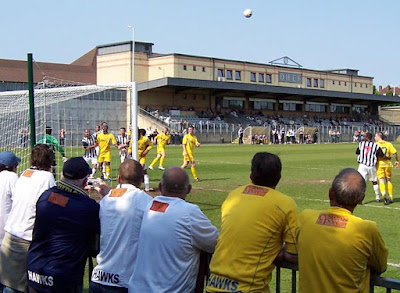 So three-three, and we’ve made it to our destination. This journey has been made in a leaky landing craft over often-choppy seas. Also, let us not forget that the next hurdle immediately beckons. We’ve got to fight ‘em on the beaches yet. ‘‘Em’, as it goes, turning out to be Braintree, with whom we’ve very recent ‘history’, but more of that next week when some more semi-relevant words from the second leg will spout forth.

Now, the thing about avant-gardist music is that while its rhythms and structures may seem, on the face of it, unsettling and disjointed, give it time and it can all slot together and make perfect sense. I hope that that part of the analogy also holds true and thus, in this coming week, the Hawks slot into a groove as emphatically as a jukebox stylus cuffed into life by the Fonz.