So, it’s that time of the season again, folks. That time when your rump makes like an agitated music hall impressionist making a third attempt, in front of an increasingly restless crowd all harshly reddened by happy hour gin, at rendering the sound of a cellar door opening in a decaying, derelict châteaux. A top manager once put it more succinctly than that, but sadly it’s become the lazy sports writer’s go-to bum-etaphor ever since. I will wager my handsome legs that you’ll have heard it on your telly or read it over someone’s shoulder at least five times in the last month.

With it being that time, then, that time when Alex Ferguson’s apparently rusty rectum takes over the nation’s media with a Mao-ist ubiquity, you’ll be pleased to learn we will not countenance its usage on these pages. In later postings, should the need arise, we’ll be going with “Tony-the-turtle-stretching-his-long-old-neck-to-touch-cloth. Time”. Cumbersome, yes, and goes a little further than Fergie’s windy suggestiveness to something a touch more incontinent, but hopefully the anthropomorphism will be enough to appeal to the kids. 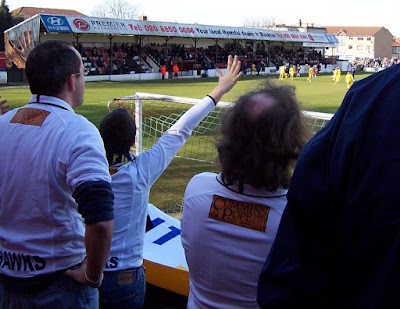 See, I’m just trying to open up the market for vaguely unpleasant anus-centred anxiety analogies, I’m not denying for one minute that Fergie had something. It is all about the arse at this stage of the season. Whether fighting for promotion or against relegation, team’s need backbone. Sure, but take a trip down one of those and where does it lead you, eh? That’s right, the same thing you need to pull your finger out of. Son. Before I take my boot to your backs… You get the picture.

Sometimes it is just arse. There are scales of that though. It will be fully arse for those who are already resigned to a dismal fate. It is a truth universally acknowledged that a man who’s been doused in petrol for three weeks, must be in want of a match (and a refund on their West Ham season ticket). For others, it will be arse in pockets (to paraphrase Chrissie Hynde), and that holds true for those at both ends of the table. Each week threatens to disappoint, drive you mad or even derail an entire season. I myself am quite lucky that my side currently occupy third place in the Conference South, but it’d only take a couple displays of arse to stun the play-off dream, and kill the one of automatic promotion.

When you’re playing away at the side occupying the final play-off spot in 5th, it becomes exactly what Sir Alex suggested. Who’s that knocking on the door? Well, if it isn’t Tony the turtle! Hello Tony the turtle! Earlier in the season, we took Welling apart 4-0 at home, but this being the time it is, every performance needs to be a big one, whether playing promotion rivals, the relegation haunted, or even those in middle table who are already casting one leg over the side of a hammock and tilting their straw-hat towards their chin. 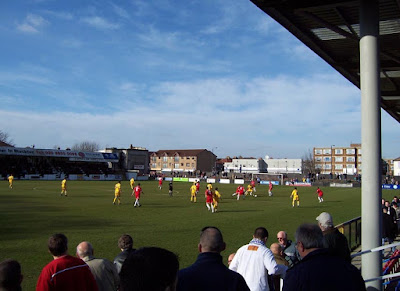 We’ve been in good form lately though. Not only coming from 3-1 down at home to another potential play-offee, Bishop’s Stortford, to win 5-4, which was followed four days later by a 5-1 away win at Weston Super Mare, but further 4-0 and 6-0 successive home wins over Bedford Town and Hayes respectively, the latter equalling our record league win. The form, like I say, has been good, Rocky Baptiste finally getting a hat-trick whilst running away with the golden boot, and the defence remaining unusually solid (well, most of the time). So not much arse around our way of late, but a 1-1 draw today felt a bit like it, especially with an early lead squandered. And I know, I know, I’m saying all this knowing full well that I’ve been spoilt this season, promotion challenges and big cup ties and all that. Just don’t want the so near/so far thing to kick in, is all.

So, yeah, 10th minute. Jamie Collins with his back to goal, flicking the ball with his left foot past the keeper, a defender and his own right leg with the spontaneous, ramshackle invention of a teenage punk band let loose for the afternoon on a viola pock-marked by woodworm. 1-0. Sun is shining, weather is sweet, all is good with the world. “When we win promotion, this is what we sing…”. Except we didn’t sing that, I guess previous fairly close-run disappointments have tempered our chicken-counting a tad.

We had two further chances of note in the first half, Jefferson Louis with a gilt-edged chance to nod in a Shaun Wilkinson cross at the far post, while Wilko himself drove in a fierce shot that was tipped over by Welling keeper Jamie Turner. Admittedly this was probably going over anyway, and the ref certainly believed so, robbing Turner of his glory by awarding a goal kick. Turner had a decent game all told, but was certainly not kept as busy as Shane Gore in our goal who was punching out hard and often, like an angry tramp trying to establish an arc of territory in the corner of a past-its-prime shopping arcade. 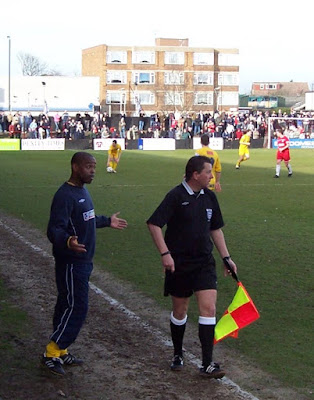 In the end, we didn’t make the most of the breaks we did get, Jeff-Lou getting caught up in his own legs like a awkward, geeky, teenage crane-fly on several occasions, while Rocky clearly didn’t bring his Grade A shooting irons either. Perhaps it was the presence of his closest challenger for the Conference South golden boot, Welling’s Danny Kedwell, that was putting him off. However, Kedwell didn’t get on the scoresheet either. Sadly, his team-mate Ben Lewis did, nodding a cross back over Shane Gore just before half-time.

In the second half, with Welling barrelling down their slope and out of the sunshine, it was always going to be a tough task, and Gore had to be at his best, particularly with one point-blank shot that 99% of the time would have caused to net to billow like a line-drying bedsheet on a blustery hill-top. Our moment of note came when a ball going fairly innocuously across the Welling box, flicked up and appeared to strike a defender on the underside of his arm, causing fury behind the goal. I was stood, briefly, around the side at the time but, from what I came to gather when I got back around, there was something cast iron being nailed-on to a stone-wall, or something. Also, it was a definite penalty. 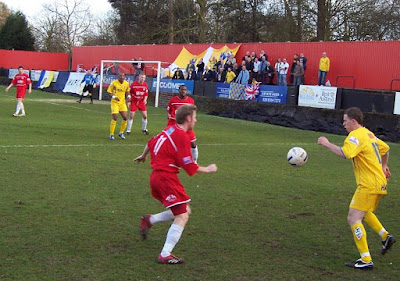 Being on the side however did allow me to watch the by-play involving our sub Fitzroy Simpson, who was following the linesman up and down the touchline, asking “Am I wrong then though? Is it netball now is it” with the scowling, repetitive incredulity of Jeremy Paxman querying the presence of a mini-bar Toblerone on his hotel bill.

In the end though, we were probably holding on a bit but if someone had offered us one apiece at 3pm, they’d have soon been left screaming at their blood-gushing stump, their hand having been snatched off by several eager Hawks at once. However, with another 1-1 draw following the next Tuesday away at Eastbourne Borough, there’s only so long we can rely on these kinda results with seven away games still to go.