In my last post I described how a 1-1 felt ‘a bit arse’ in a lengthy, anally-fixated piece. Probably not one of my finest, and now with hindsight, how I’d love a return to those halcyon days of, well, the first part of this month; of tight away draws; of the stout defending that made the first two thirds of this season a very different kind of watch for us Hawks used to spirited attacking, but naïve, haphazard stuff at the back. Like I acknowledged though, this raising of the expectations is what happens when you’ve been spoilt. Even last weekend, we turned a drab first half performance into a pretty impressive 3-1 over the eternally mercurial Newport County, consolidating third position in the table.

This enabled us to travel away once more this past Tuesday with confidence and this, well, this would probably be the point which determined what the remainder of our season would entail. Continuing to fight for automatic promotion, or merely to make sure of a play-off berth. The Glassworld Stadium, home of league leaders Histon was our destination, and although Histon would retain a game in hand afterward, their lead over us could, in those ninety minutes, be cut from five points to a very chase-able two. As it turned out, we rolled over easier than a set of Ghandi-inspired union skittles staging a pensions demo. 4-0. FOUR. NIL. The word on the street was of a shocking, deflating second half. 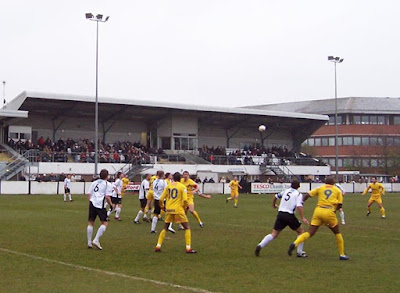 However, four days later, a chance for our guys to return to the scene of the crime to put things right. Well, almost the same scene, Cambridge City being only about four miles from Histon. Must we then blame the Cambridgeshire air – today featuring the cold, the wet and lashings of dank - for 3-0, a second successive heavy defeat with barely a shot on target. We might, as a set of supporters, be able to deal with getting stoved by a team who appear to have one hand on the league title, but Cambridge City are mid-table floaters this year, with more pressing off-field concerns such as the future of their club. This, after a couple of years of clinging on to the front-door like a baby onto their hippie uncle’s ponytail, looks as though it will be their final season at Milton Road, their lease having finally run out, rather cruelly, after 99 years. It is only that imminent threat of eviction that prevents “you’ll be back again next year” from entering the City Shed Choir’s repertoire.

So you could argue that that puts the concerns of not gaining promotion into perspective, but excuse me the occasional Veruca Salt-esque tantrum. I want promotion. I wan’ it, I wan’ it, I wan’ it!!! However, from being well set last weekend, only four points now separate us from Braintree in sixth, one place outside ‘the zone’ and precisely where we finished last year. We couldn’t let it slide at this stage after such a successful season. Could we? I’d like to think not but at the moment the worry is that our side could quickly become like a stricken milk-float teetering backwards over a ravine i.e. at the pivotal point, all the bottle will rapidly slip away.

Keep the faith Skif - all will be put right at Yeading on Tuesday, of that I'm certain....

You don't get out of it that easily, Reg.

I take that as your guarantee of victory. Anything less and, well, I shall be deeply hurt by your inability to follow through your promises.