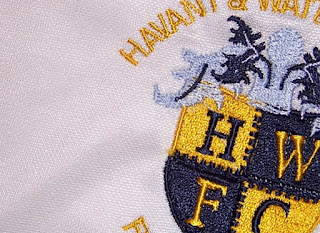 photos of the game by Dave Haines here

As you’ll have gathered from the fact that I’ve been present at every round of it thus far, I love the FA Cup. That is not, though, a view held by all. Clubs entering at this second round stage, and drawn at home, will almost all have suffered a drop on their usual attendance this weekend. That is the way of it. H&W will always, while they remain in the Conference South, enter at the 2nd qualifying round stage, so there’s little uncharted territory; little intrigue in that. However those who came in at the extra-preliminary, who find themselves still alive, will get a few extra curtains twitching.

However if my handsome Hawks make the 4th qualifier, with the potential of a league club in the 1st round should they win, the average will be significantly bettered. Fingers crossed and welded to a plank of wood therefore. Interest in the Cup may well then be an equation of a club’s level ÷ the round occurring x (the opposition's status2 x size of the prize), or something. In today’s case, x=FA£3,750-and-Carshalton-at-home-next-round. Possibly though, a cup tie against lower league opposition merely allows you to turn off your football set and do something less boring instead, and thus avoid bearing witness to a calamitous scalping (casting mind back to here), or a regulation dispatching with the odd hairy moment, but lacking in genuine excitement.

Some don’t need the cod mathematics. Some just hate the FA Cup. Indeed some of the first words I hear as I enter the West Leigh Park are: “I hate the FA Cup.” These words come from a man who followed Coventry City in a former life and, as such, packed the two extremities of FA Cup emotion into an all-AND-nothing 20 month period. Winning the thing in ‘87, to getting dumped out by Sutton United in ’89. Doesn’t get much more bipolar than that. Thankfully, with H&W sharing a division with Sutton for three seasons now, he’s appears to have trained himself out of the heavy tick that inevitably came with the clack of the turnstiles at Gander Green Lane.

Others amongst our support view the FA Cup with even greater amounts of respect than I, going as far to insist that we supporters deal with the big cup with the adequate levels of elegance and decorum. As such, the Hamster is resplendent today in shirt and tie, and not for the first time on the road to Wembley. We may have only one follower dressed in such a way, much to his dismay, but Team Bath do not appear to have any followers at all, dressed in any suit, neither business, bear nor birthday.

Being that Team Bath are, to use a less Americanised moniker (or just one that doesn't suggest an antiquated alternative to the communal shower) the University of Bath FC; and we’re just coming out the other side of Freshers’ week, it is perhaps understandable that any followers they might usually be able to call upon will be too busy reclining upside-down behind a new friend’s washing machine to travel all the way to south-east Hampshire.

Team Bath though are not quite what meets the eye. Certainly scholarships and coaching staff appointments have given their squad an extra edge in the last few seasons, while 90 year old coach Ivor Powell keeps everyone feeling very young. The once towering Bath City’s decline means that they not only share the city, and more recently their ground, with Team Bath, but also a division. Certainly, not your average bunch of Uni public bar trouser-droppers then, and four seasons ago, they were the first university side since Gonville & Caius College in 1881 to enter the FA Cup. That same year they made it to the first round proper. As did we. They got Mansfield Town, we got Dagenham & Redbridge. F*****’ stoodents.

As you might imagine, both our clubs fancy some of that action again, and like I say, the Hawks road starts here, with a game that on paper should see a comfy victory. However, Team Bath rock up to WLP on the back of a 7-0 thumping of Downton in the previous round. Game on then, and fairly see-saw early in the first half, before Carl Wilson-Denis, starting for the first time since pre-season, takes the edge off (for a bit), twisting the ball in at the far post after the Scholars defence has gone sleepies.

Sixteen minutes later though, and with the Hawks continually looking unmotivated in the face of such opposition, Rocky Baptiste blots his otherwise pristine copybook, welting a 40 yard pass across the field and back into H&W’s half, where it is intercepted by Andy Reilly, who bustles easily past a crazed Neil Sharp challenge and to the line, from where he fizzea across goal, allowing a simple thump from Sean Canham to level the scores. For the remainder of the half, H&W look pretty clueless, Fitzroy Simpson often disappearing and Michael Warner playing as though without studs and a bewildered index-finger hooked over his bottom lip.

Last week, after going in at half-time 1-0 down to Histon, Ian Baird’s team-talk could, so I’m told, be heard in the board-room and rather embarrassingly so, the riot act as liberally peppered with vicious invective as Irvine Welsh’s bedside notepad. Today, the same would be required, the Hawks appearing only very barely interested or able come the break. A defeat would be disastrous, a replay not far short, and thankfully, their game is upped for the second period, although it still takes a while, with some perilous goings on amidst the midfield.

However the whole momentum changes after Tony Taggart is brought on for Simpson, and then Dean Holdsworth for Wilson-Denis on the hour. Holdsworth, returned to our bosom after some time last season with Derby, Weymouth and Heybridge, strides on, all perma-tan and worrying potential-mullet straggling against his nape. Further down, his shirt falls around his body in much the same way as a pair of tights might settle against an armed robber's face. He does, though, almost instantly give us the lead, his header from a corner kicked away from danger.

Holdsworth, despite, or perhaps because of, a lengthy but aimless dribble at one stage, does appear to have lost a little of his magic in the last year away, and is likely to continue in that Teddy-Sheringham-last-half-hour-I’m-89-y’know mould, particularly since his replacement last September, Rocky Baptiste has picked up where he left off last season, scoring goals for fun. Indeed, it is the Rock who restores our lead in the 64th minute. Mo Harkin makes a bee-line for the box, and a penalty is obvious before anyone goes near him, but sure enough, Reilly supplies the leg for Mo to try-and-not-hurdle. Down he goes and the question is, will it be all-in-wrestling between Dean and Rocky to take it. The elder statesman though makes no attempt to reclaim penalty duties, and looks ecstatic when Rocky’s head-on approach and deft side-foot sends Darren Chitty the wrong way.

With the Hawks re-galvanised, it is only another five minutes before we score again. Some quality work in the centre from Taggart enables his pass to reach Michael Warner, who continues the footwork dexterity in finding Rocky Baptiste. His first-time ball across goal finds an unmarked Brett Poate who has the simple job of nodding in the winner.

So, 3-1 it finishes. A regulation dispatching with the odd hairy moment, but lacking in genuine excitement. Am I disappointed? F***, no. Just 180 minutes now from Nottingham Forest away!

Mmmm, maybe I should get me another plank.