I made mention, in my sketch of Atherton LR’s insipid mauling by Cammell Laird at the apex of last season, that those who found themselves in the North West Counties League Division One this season would probably be quite happy with their lot, what with a home game guaranteed against protest club FC United of Manchester. However, FCUM’s fans, whom are legion, have caused clubs in the NWCL to undertake a reality check on their spartan facilities and, as such, in their freshman campaign, FC United only played three genuine away games (at Leek CSOB, Darwen and Flixton). They did though visit Accrington Stanley (3x), Oldham Athletic (3x), Hyde, Altrincham, Radcliffe, Stockport, Macclesfield, Chorley, Blackpool, Stafford, Port Vale and Barrow RLFC without playing any of them.

However, already in this campaign clubs are discovering that playing FC might not be quite the moneyspinner they thought. On the opening day, St Helens Town were disappointed with their attendance despite playing at their usual base of Knowsley Road. Sheffield FC’s hiring of Don Valley stadium for their pre-season friendly was rendered pointless and costly when only 600 showed up, all of whom would not only have fit snugly into their Coach & Horses ground, but might have fancied a crack on some phone box world record action.

In addition, Brodsworth Miners Welfare, FC’s first ever opposition in the Vase, indeed any FA competition, found the costs of hiring Rotherham’s Millmoor to be prohibitive and thus went all ticket at their tiny Welfare Road home. It appears FC may have to get used to slumming it properly while they remain in the NWCL. Mind you, it looks as though they won’t last long there, as prior to tonight’s game, they were top, with a 100% record over 10 games, averaging 4 goals per game and conceding 4. In total. 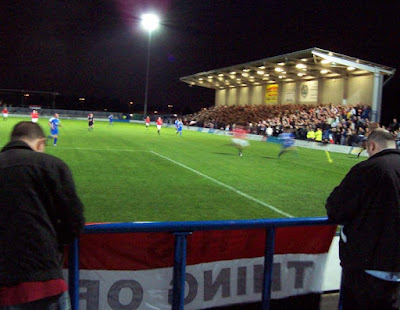 Curzon Ashton are also a fancied side in this division, with above average support and, luckily for them, in a ground all set up for such an occasion as FC United rocking up, having moved into Tameside Council’s handsome new facility in 2005. Nearby Conference North side Droylsden were also invited to make use of it, but preferred to keep with tradition at the Butchers Arms, which was FC’s first choice for ground-sharing as it goes, before the size of the breakaway support made Bury’s Gigg Lane a more sensible choice. In the context of the North West Counties, and pretty much all of the pyramid, the size of FC’s support has been pretty spectacular.

I have heard incredulity at the break-away decision from outsiders, and I can understand that. For example, going overboard on the piety, abusing supporters of clubs who take on MK Dons in a friendly and such, appears to be chipping away at AFC Wimbledon’s goodwill and it is not as if FC United’s stroppy-teen hardcore are going to be keeping quiet about the mother club anytime soon. There does appear to be a bit of an identity crisis wrapped up in FC’s support, what with their constant referencing of Malcolm Glazer, the Busby Babes, Rio Ferdinand and Manchester City in their choral repertoire.

However, I have a greater understanding for the disillusionment and disenfranchisement that can occur from upper echelons of the game that has been massively transformed by big money in the last decade and a half. It’s one of several reasons that my vague, 13-year association with Southampton FC came to an end in 1999. As a more recent example, take my uncle. When I first showed an interest in football, he tried very hard to thrust me bosom-wards into the, in those days, needy arms of his beloved Charlton Athletic (I was a Junior Red for a year, y’know, and my first live game was a Charlton ‘home’ fixture at Selhurst Park). However, where once he was wrapped up in the old community spirit that kept Charlton alive back in the late 80’s, he has now become detached and given up his season ticket, and will now be watching a Dartford side returned to the town after 14 years in exile. 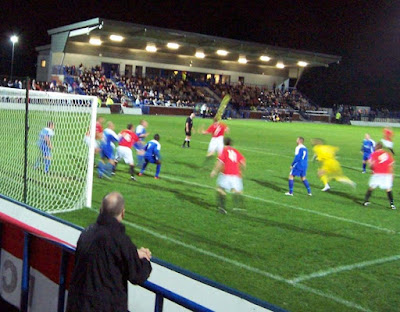 If it can happen in a drip-drip like this, is it such a stretch to understand why an aggressive takeover of a club might turn the tap full on for a few thousands supporters missing the camaraderie, and fed up with players like Rio Ferdinand, stalling for a massive pay-rise despite, as FCUM supporters will tell you, missing eight months of games for Manchester United through his own idiocy. As a result, they turn their backs on a club they don’t recognise as their own anymore. It’s interesting to note that, as yet, FCUM have yet to wear a sponsor’s name on their shirts. Curzon Ashton have no such ‘No Logo’ pretensions, sponsored by Greggs to the tune, it appears by the stack in the tea-bar, of a couple of thousand pies. FC’s fans certainly won’t be able to complain they’ve not been looked after tonight.

Like I say though, there does appear to be an identity crisis inherent to FCUM, and I don’t think its too far from the truth to suggest they are trying to be like Man U, but without the corporate bullshit and a greater focus on the local community, especially as one of the many flags put up around the Tameside reads “MU(FC)UM – 2 Uniteds: 1 soul”, and it doesn’t just rest at that.

In the 1990’s, British wrestling promotions were trying to get away from the fat-dads-getting-clocked-by-irate-old-ladies’-handbags image that still festered from the Dickie Davies World of Sport days. Their method? To get their pro’s to become, essentially, unofficial franchise versions of WWF superstars, to mimic and impersonate the top performers from the US market. For example, there might well have been a British Hulk Hogan, who would probably have exchanged the blonde-dyed Sanchez whiskers for a mousey Field Marshall handlebar, but he’d have meant well. There was certainly, though, a British Undertaker doing the rounds, and a British Legion of Doom. I imagine a similar motivation may be behind FCUM’s signing of Rhodri Giggs. Yes, brother of. 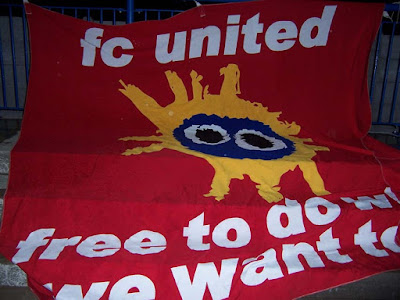 The fact that Rhodri’s an affective, pacey non-league winger may be just a bonus. Still, they love him here, and he gets serenaded with a bit of Joy Division: “Giiiiiggs. Giggs will tear you apart again.” That is certainly one thing you can’t take away from FC United of Manchester’s abundant support. They sing. And keep singing. Pretty much without taking a breath. For a full 90, pretty much. Ignore for a minute the chip-on-the-shoulder lyrics, “…you can’t buy me you greedy twat”…”running round Old Trafford with his head on a stick” etc, and the FC fans are pretty sharp and good-humoured. “We can see you getting wet” they sing to those of us outside the all-ticketed covered terracing, “We’ll drink dry the bars, when we win the FA Vase” they boast and also ask the kit-man to give them a wave. There is also a very oddly placed ‘Under the Boardwalk’ “…watching F-Ceeeeeee” with an impressive collective falsetto on that last syllable.

Despite the antipathy towards Glazer-brand Manchester United, they cannot be accused of not succumbing fully to the charms of their new club. It’s even there in the kids, who you might expect to a bit starry-eyed and unwilling to let go the grandeur of following a Premiership club, but their hero-worship has been easily redirected. There can’t be many North West Counties players over the years that have been approached for an autograph, let alone faced a queue of eager hunters. Here, it happens. It appears to be a profound, mutual bond.

FC, the football team itself I mean, don’t worry their support overly tonight either, ticking off another impressive victory against a Curzon side that will be better than most they’ll face in this campaign. Indeed, Curzon make a great deal of the opening half an hour but after holding back their pressure, it is FC who score first in the 38th minute. A looping cross-come-shot is tipped over by Ashley Timms. From the corner, Stuart Rudd (who accomplished great things in this division with Skelmersdale last year) heads against the underside of the crossbar, Simon Carden getting the merest push on the ball in to beat a defender’s lunge at the near post. 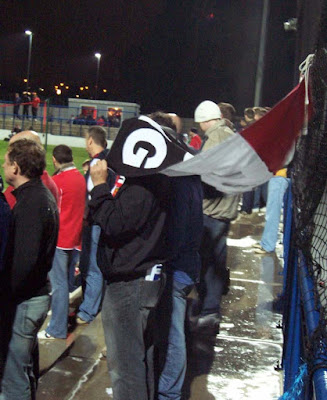 FC come out in the second half much more buoyant because of this, and increase their lead in the 51st, John Howard skipping down the right and sending in a cross that defender Andrew Watson can only divert with his toe past Timms. FC have a bit of a wobble with twenty minutes to go, as William Ahern gets tunnelled for retaliation and ten minutes later, Curzon make things even more edgy as Michael Norton, the division’s current top scorer with 12 (17 in all competitions, having only failed to score in two games so far this season), gets one back, beating the last defender and head-on scissor-kicking the ball past keeper Sam Ashton. The PA pipes into life with “I Feel Good” and the Curzon support, about 100 of them swamped by those in red, reveal themselves in the main-stand with a triumphant ‘YES!”.

With two minutes remaining, however, Stuart Rudd maintains FC’s 100% record with a great piece of awareness. Noticing that the keeper’s kicking has been suspect, he chases him down, and Timms fails to deal with the high bounce, scuffing his kick to Rudd, who rounds him and slots in off the far post, which increases the song count yet further with “We told you not to score” and “We’ve only got ten men” blasting out.

It’ll take a very good side to stop FC United winning their second successive league title this season, particularly as even the better sides like Nantwich and Maine Road already have quite a bit of catching up to do.

Skif, that's a brilliant assessment. Spot on. As a FC fan (four games last season!) and party to minutes of the AGM (a huge majority vote not only to reject a sponsor but also to not change the kit this season a la MUFC) your take on the whole thing is great.

I'm not even sure the Glazers remain the driving force behind it - I get the impression from going that it's the regaining of what football used to be about that's more the issue here - an affordable ticket, a pie in the ground that doesn't cost you £4, the ability to stand, some association with the "normal" lads playing (not some bemulleted nancy boys).

As a similarly reformed Evertonian (90-99) I agree totally: your assessment is spot on.

The sad thing is that the disenfranchisement could spread lower down too - fifteen quid to watch Darlo in an empty megadome while the board pursue their megalomaniac pretensions, or eighteen quid to watch Vale (my local side these days) if ever I fancy it.

On Saturday we went to Market Drayton vs Oadby in the MFA (att. 87), and what a breath of fresh air it was. Short on technique, but exciting and involving none the less.

I agree about FCUM too; I saw them vs Stalybridge in a friendly last year and their fans were superb throughout.

It's not as if they weren't leaving the glory behind, and I just can't see the same thing happening at Chelsea.