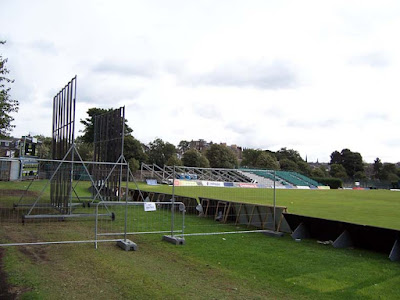 The Grange at Raeburn Place is the home, not only of Grange CC, but of Scottish cricket. Sounds quite grandiose, but the reality is a little more ramshackle: plastic chairs upturned so as not to collect water; a single marquee set up to house the players in the absence of an adequate dressing room; and ugly metal fencing keeping one half of the boundary free of spectators. Not that there are many considering it is a working Friday, and it's wet. Although I'm sure they're used to that up here.

It's scruffiness is supplemented at the moment as the not yet complete dismantling of the temporary seating set up for the completely washed out tie with Australia 2 weeks ago makes the scene all the more forlorn. Considering it was a 4,500 sell out and Scotland's biggest tie since the 1999 World Cup, one may feel a great deal of sympathy with Saltire-clad supporters.

It can't be easy to drain The Grange either, considering it lies in trough within Edinburgh's climbing urban relief. However this makes for a fine view from the Rugby End, as from here Edinburgh Castle sits atop the ascending skyline.

The peculiar pavilion just to it's right, as I view it, makes for quite a contrast. It is box-like but nonetheless features a roof terrace, gable and even a small spire. It is at once both ornate and dilapidated in a ground that appears a little unloved but quaint (in it's most utilitarian sense). With that in mind, and the fact that the Scottish Saltires are facing their 3rd successive basement finish in the Totesport Div 2, means it is no surprise that the Triennial experiment will cease this year.

However the Grange (Citylets Grange to you, son) will still see top level cricket as Scotland, along with the Irish, have survived the minor county cull in the C&G Trophy. The occasional home international against touring nations like Bangladesh can also be expected. 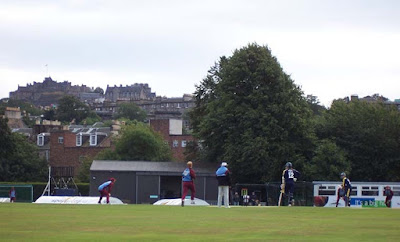 Just prior to the 1pm start, a downpour hit Edinburgh, delaying the start of the game by half an hour which reduced it to a 42 overs a side game, however a further shower after 38 overs meant the show ended there.

Derbyshire Phantoms had won the toss and elected to field, and Paul Hoffman clearly wanted to make an instant impression and use of the fielding restrictions. As such after 3 dot balls, he welted a 4 then a 6 and then promptly skied one to short fine leg. A potted display of batting in the first 6 balls of the day. Clearly he thought it was a beer match, and with regular showers forecast it may well have turned out that way and so it was probably best to fend off the twin spectres of Messers Duckworth and Lewis early on.

The tumultuous start merely inspired the bowler in question Graham Welch, who proceeded to take a further wicket in the next 5 overs for only a further 2 runs off the bat, eventually finishing with 2-21 from 9. The Scots innings was much of a muchness from that first over, with wickets falling regularly and the wet outfield making for a slow scoring affair. Fraser Watts remained at the crease from start to finish for a mere 71*, while in the lower order Douglas Lockhart allowed a partnership to develop while pinch-hitter Yasir Arafat plundered a few late boundaries, 69 coming from the last 10 overs. 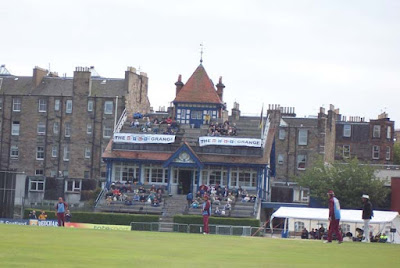 As Scotland hadn't expected their innings to finish at 38, the Duckworth/Lewis method instructed that Derbyshire's target was to be 186 initially, but after a further 23 minute delay, the target became 161 from 32. With Stephen Stubbings leading the show with 75*, and opening bowler Hoffman getting tanked for 42 off 5 overs, all appeared to be going fairly swimmingly for Derbyshire at 119-2 from 23. Scotland tried several bowlers for one over at a time at this stage (Arafat having been bowled out for 1 for 17 off 7, skipper Craig Wright similarly good with 1-20 off 7), before they found some stability from Cedric English and Ryan Watson who took some late wickets to apply pressure and induce some panic into the Derbyshire tail.

17 needed from the last 3 overs looked easy, 15 off 2 less so particularly as the 7th wicket fell in the penultimate. However a boundary and some quick running eventually left a requirement of 8 from the final over. After a single for Mohammed Sheik, the tension was taken out of the game a touch by Stubbings hosing a massive 'fuck-this-then' 6 off Watson who, after a bad first over, had bowled exceptionally for the following 4 taking 3 wickets for 10 in that crucial time. Demoralised, the next ball was again easily dispatched to the boundary for 4 sealing a 3 wicket win for the Phantoms.

Credit to Scotland though, as 4 of their 7 bowlers performed very well, but in the end that they couldn't remove the man who had taken the first ball of the innings was ultimately their undoing.
Posted by skif at 3:32 am