Since Meadowbank Thistle mutated into the upwardly mobile Livingston franchise, Edinburgh City have been resident at the Meadowbank (formerly Commonwealth) Stadium out to the east of the city. Quite a handsome facility for the East of Scotland league, their 16,000 seats possibly a little over-pampering in comparison to nearby Spartans, who have squat (which, incidentally, is one of the few options of stance left open to attendees).

It is, though, to the home of Spartans that Edinburgh City are forced to decamp for today’s cup tie. You can blame the creative reunion of Kim Deal and Frank Black for this, as a Pixies concert takes precedent at Meadowbank, the football team, err…, de – based for the weekend. City Park is not the foreign territory it might be though as it was once their home, the ground’s moniker providing the inspiration for their generic suffix. Today would be Edinburgh City’s first home match at City Park since 1947.

That said, the current ‘Edinburgh City’ isn’t quite the same club as was back then, the club that knocked around the lower reaches of the national Scottish Leagues between 1931 and 1949 in a hapless manner rather akin to East Stirlingshire’s recent notoriety. That entity ceased to be in 1955 and the current Edinburgh club formed in 1986 when the board of directors of Edinburgh City Football Club Ltd. approved the use of the usage of the name by East of Scotland league members Postal United.

The very essence of Edinburgh City seems to have been transient, with the original club swanning around several grounds, and this entity seemingly carrying on the tradition of road-testing grounds for future league rivals, with the pitches at Saughton Enclosure (now home of Lothian Thistle) and Paties Road (Edinburgh University) having hats laid upon them prior to the hire of Meadowbank in January 1996. This is the hobo club, so it seems entirely fitting for this one to join them while they on the road yet still very much ‘at home’. 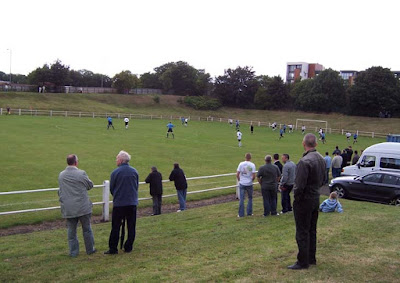 Today’s fixture sees the Premier Division of the East of Scotland taking on Gala Fairydean who occupy the division below having been relegated last season. Gala are probably one of the more well known names of Scottish non-league, particularly outside of the comparatively high profile Highland League, having dominated in the East of Scotland during the 70’s and 80’s.

In Scotland, like in England, one way for smaller clubs to get a bit of cash and attention is to reach the flagship cup competition. The Scottish Cup system though works in a slightly different way to England as two qualifying cups are played in the north and south of the country. The clubs that reach a certain stage of the competition go on to play in the Scottish Cup proper, but also carry on the Qualifying Cup to produce a winner, so its kind of FA Cup qualifiers and FA Trophy in one.

Edinburgh City have recently come up against Dunfermline and Partick in the cup proper while Spartans did particularly well a few seasons back giant-killing twice before coming unstuck at home to premier side Livingston. It is difficult to see how they accommodated a game against a Scottish Premier side as not only are there no seats at City Park, there is precious little hard-standing, and most of the pitch is surrounded by steep grass banks creating not so much a natural amphitheatre, more a natural green velodrome. All very well on a reasonably warm day like today, but I guess those turning up to watch Spartans in a typically Scottish winter would be die-hards indeed, possibly unintentionally invading the pitch during particularly fierce downpours. 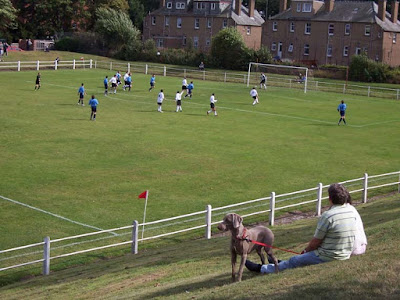 City score first after 10 minutes, a decent one-two springing the defence, the ball calmly curved around the oncoming keeper by Adrian Nieto Gonzales, a 22 year old Spaniard currently trying to catch the eye of the Scottish professional clubs having plied his trade previously for Cultural Leonesa and S.D. Compostela in the Spanish second division.

His roots are betrayed by around 15 minutes later as twice in not too long he writhes around in agony at the slightest of challenges receiving a sly tap in his back from a Gala foot. As he gets up the opposition ask “why ya holdun yer stomach, ya teht” and an argument ensues. The soft-spoken female assistant ref’s attempts to mediate are less ignored as they are unheard. On his second screaming fit, the ref makes sure to acknowledge that he is making a bit of meal of things, while continuing to book the disbelieving Gala midfielder.

From virtually nowhere Gala equalise in the 33rd minute but are in deficit again 2 minutes later as 20-yard Craig Young shot bounced off the flailing keeper Chris Anderson’s chest into the path of the ever alert Gonzales. Half an hour later the tie is pretty much killed off as Anderson is softly lobbed by Dougie Gair, his finger tips not enough to prevent the ball from bouncing slowly inside the side netting. 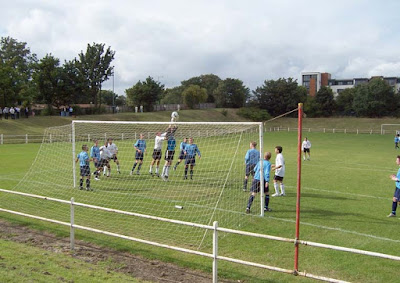 It is at this point that it becomes clear that there are a smattering of away supporters amongst the assembled few as Anderson gets roundly and irately barracked. It cannot be easy following a team with such a name, a handle born out of nursery rhyme folklore or possibly in description of a posh night out that descended (ascended probably better) into high camp. Sadly, despite the ground-breaking work heard from the Queens Park mob 3 weeks prior, a chant of “Come on you ethereal sprites” is unforthcoming.

In the final minute, Edinburgh City have netted a flattering 4th, the ball cleverly and patiently passed across the box despite elements of ping-ping serendipity. They are calm and send it goalwards only when the proper chance comes which is certainly admirable when snatched shots often abound (and continually rebound) at this level.

So onward march City and they won’t be the only Capital side to make it through to the next round with Spartans winning 4-2 at Glasgow University and Edinburgh University scoring 3 from the 88th minute onwards to despatch Burntisland Shipyard.

Look out Alloa then, for from the tip of Arthur’s Seat they descend.

Thanks for the wonderful and 99 per cent accurate description of the meandering history of my beloved Edinburgh City. It was like being there myself, even though I am exiled in the Wirral, forced to endure Tranmere's 'efforts' which have been painful and sad this season. I'll even forgive your unnecessary jibe at Meadowbank Thistle.

Thanks again, it really was like being there! Sadly, we went out to Spartans in the QF replay and missed the chance to play Berwick in the Scottish Cup.

PS It's Edinburgh UNITED who play at Paties Road.

Wasn't meant to be a jibe at Meadowbank Thistle, I have no beef with them, and a combination of research from the Edinburgh Evening News, the matchday programme and the Edinburgh City website has clearly led me astray on the Paties Road matter so many apologies for that, and ta for setting me straight on it.

Many thanks for your comments of praise, always brightens up a Monday morning. Ta!

The remark about Meadowbank Thistle has been removed as the article does not lose anything for it's absense.

Seems fair, as no jibe was meant.