Middle of July, no jacket required and competitive football on offer. This hobo approves, kickstarting the 2005/06 tread in North Wales on a seaside promenade chiming with the customary tunes of the tacky amusement 'palace'. These front up a town that seems uncared for or about since the bottom fell out of the buckets, spades and Super8 British seaside holiday market.

That said, it does seem a relaxed place on the surface, a feel thats typical to Wales, although mainly in the villages and valleys. Being a seaside town, I am sure there are sparks, but that they are put out quickly.

Rhyl should have everything going for it, sat between the gorgeous rolling hills and a sea view that is far enough west to not be limited by the Wirral at close quarter. 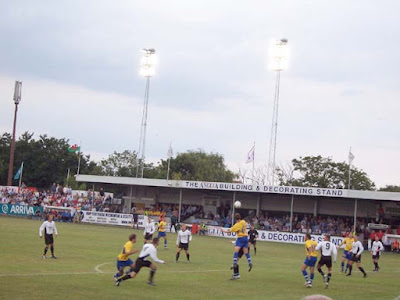 The beach, by 6:30 is as you might expect: a smattering of families walking small, excitable dogs; a number of gulls gathering, Hitchcock-like, eyeing my when-in-Rome styrofoam chip tray with a degree of expectancy; and the one guy, always just one, sweeping the sand and pebbles with a metal detector. His red shorts and orange t-shirt, faded to peach, betray recent retirement, if the passtime doesn't by itself.

Yet today is humid, rather than hot, clouds forming a guarding throng preventing the sun from assisting Rhyl's water-side strip from fulfilling it's raison d'être.

What Rhyl have got is one of the better, more established sides in the League Of Wales, with a 140 year history, all but 35 of those spent at their current home, Belle Vue. After several years moving around a variety of North Wales leagues, they spent several decades after the second world war in the Cheshire League, in addition to 9 years as part of the Northern Premier League strand of the English pyramid. In 1992 they moved into the Cymru Alliance, before gaining promotion after two seasons to the League of Wales. While they didn't pull up trees at first, the last two seasons have brought great success, with the Welsh Premier league title won in 2003/04 along with the Welsh Cup, Premier Challenge Cup and the North Wales Challenge Cup.

Rhyl also have one of the better grounds in the LoW, and certainly one of the few to have a UEFA ground grading, allowing them to host this home leg of a tie with Lithuania's FK Atlantas Klaipeda without knocking on Wrexham's door. This place in the first qualifying round of Europe's second most prestigious cup competition is their reward for finishing 2nd to Total Network Solutions in the Welsh Premier last year. While Belle Vue might seem a ramshackle venue for such a prestigious contest (scaffolding providing the extra steps of 'terracing' at the far end), it is essential that UEFA opens its arms to all its member nations in this thorough and unregionalised way. While making trips to Lithuania and Latvia (as they did in last year's Champions League qualifiers, losing to Skonto Riga 7-1 on aggregate), might be expensive to sides such as Rhyl, averaging 350 at home league games, they are such a boost to profile and morale. Certainly, the eager anticipation of a Baltic beano on the Rhyl message boards would appear to prove this.

It is perhaps unfortunate though to draw sides from Northern Europe who play through the summer, such as those from the Baltic nations, as they will have 3 or 4 months of competitive football in their legs, whereas the Rhyl team have only encountered friendly fire from Rossendale United and Heswall since coming back from their holidays. Though this can work as advantage, as well as disadvantage.

It has been mooted in some quarters that the Welsh leagues should play through the summer so as to avoid the competition from English football, the Celtic League of rugby union, traditionally seen as the Welsh national sport. When kicking toward the scaffold end in the first half, the Rhyl hardcore amass an impressive throng, singing 'Sunny Rhyl, sunny Rhyl' suggesting that they quite like the idea. Indeed, despite the fact that the vast majority here are the tie-curious mobilised by the UEFA exotique, the spirits are a shirt-sleeved mellow high. Although I imagine the regulars' jaunty chant won't come off quite so well when Cardiff Grange Harlequins visit next February.

Their mood heightens even further in the 12th minute when Rhyl take the lead. "Are you watching TNS?" is added to the repertoire. Quarter of an hour later, after a particularly rough challenge from an Atlantas brute, sees Turkish official Cem Papila darting along to thrust old yeller into a face for the first time. "You're just a small town in Russia" is the soundtrack. 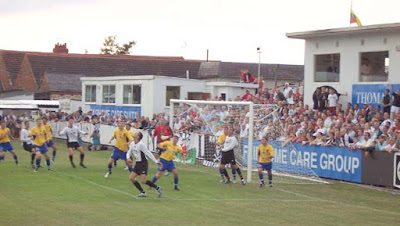 The Klaipedas travelling support, about 7 in total, cannot compete despite being afforded the front of the directors' box and coming armed with a dramatically invasive air horn. Well, I'm just assuming there that they weren't actually the Atlantas board. Supporters trusts are all the rage, after all. Far more likely though that they've merely rushed the big wig pen to be be met with harumphs and frowning from the Rhyl hierarchy. Lets hope the hand of friendship was involved though.

Either way, these fellas, all decked out in bright yellow, make for quite a contrast with their new team coach (their previous one was very recently sacked after a disasterous run of domestic defeats) strolling about in front of them, looking quite the dapper Dan in his suave fawn suit. Rhyl's gaffer's red t-shirt and black shorts combo are clearly a vivid admission of sartorial defeat.

This is the only quarter given though as he sends out his side in the second half pumped and ready to try and increase their advantage, especially considering the upcoming second leg. The Rhyl side do go for it straight away, dominating most of the second half play before finally doubling their lead in the 74th minute, Lee Hunt scoring his second thanks to a light lob over the oncoming keeper having outpaced two defenders.

The goal comes during a ten minute spell of sustained pressure where the keeper palms out for a corner and both post and bar are hit. Just a minute after the second goal, the pace and direction of the game force a rash challenge just out wide of the area. Not quite the last man, but it's a second-bookable so Gnedojus is tunnelled. 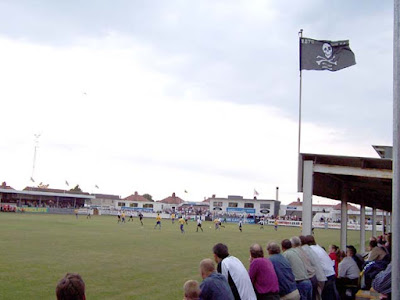 Rhyl try to take advantage of the extra man by pushing increasingly forward but this is their undoing as Atlantas break away, Zvingilas scoring what could be a vital away goal in the 77th minute. The uncharted waters of Klaipeda's docklands could well yet prove to be rough seas.

It is perhaps just as well then that Rhyl are often known as the Pirates due to the origins of their team playing in the 1870's as 'Rhyl Skull & Crossbones'. Even today, a Jolly Roger flies from one end of their longest stand. At the opposite end, a 'FIFA Fair Play' standards flaps gently.

So battle on the high Baltic seas in a fortnight then, but we can rest assured that the pillage and plunder will be prefaced by down-the-line handshakes and the exchange of pennants.