So as not to bore you again endlessly with a protracted slideshow of my holiday of two years ago, I will keep this more brief than the last.

This may have something to do with the fact that I remember little about it as well though, and surely to christ the depths of the Czech divisions are a darn sight more intriguing than the Austrian top flight. Still, Rapid Vienna was my choice, I can't remember the rationale for that. Think I'd have settled for any of the Viennese sides as the holiday coincided with the penultimate round of matches in the league, and it just so happened that Rapid were at home.

Our trip was to also take in brief stops in Graz, Bratislava and Budapest, but Vienna was our weekend base. On the Saturday, I popped down to the Gerhard Hanappi Stadium, named after a former player, to pick up an advance ticket. Not, as it turned out, that I needed to. When asked where I wanted to sit, I chose the West Tribüne, not knowing which was which. 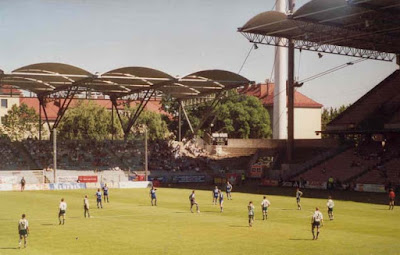 It all looked very handsome arriving back for the game, the club had laid on some sideshow entertainments across the road to celebrate the end of their home campaign, with a huge beer-tent, food stalls and kids play areas set up and doing good business. Despite this, the stadium's 18,000 seats were only quarter-filled. Mind you Rapid don't dominate Austrian football like they once did. Be interesting to see how many used to watch between the 50s and the 80s.

Of those turned out, about a third could be described as the clubs vocal hardcore and they were deliberately positioned together. In the West Tribüne.

Once through the Luton-in-the-80's style gates, using the barcoded plastic ticket (I believe Man City use a similar thing at their new pad) and the tough looking security geezers, I attempted to blend in by availing myself of the local brew from a bar set up at the back of our stand. The presence of my camera may have raised suspicions though.

Not that their sartortial answer to a Pearly King, who appeared to have glued half a loudhailer to his stovepipe, seemed to notice my attempts to capture both his eccentric garb and, more importantly, his Botham-esque mullet and tache combo. 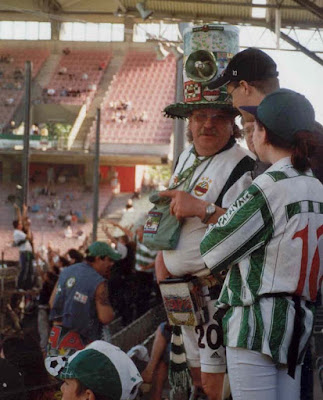 Despite the tickertape and giant flag welcome, the Rapid hardcore did require geeing up, and the two guys seemingly elevated in the background to the left of the above picture were in charge of leading the chants using microphones and speakers feeding their message back toward the West tribune alone. One up from piping canned crowd noises through the PA they may be but I bet Dick n' Dom In Da Bundesliga regularly dine and shag out on their tribal chiefdom.

Besides they do much better than the 50 or so Karnten fans who appear entirely bored by the whole afternoon's entertainment, despite their goal. 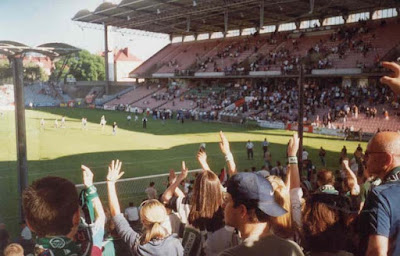 The game wasn't without incident but the best was to come as we approached the final whistle and Rapid were making all the running. The ball was played out to the flanks, and the linesman raised his flag, only to drop it again after a time. The Rapid striker proceeded for a few seconds before winning a penalty. It was buried, and it was the winner. The Karnten fans appeared to raise their heads briefly from atop their hands, to let out a resigned collective sigh, or so it appeared from the other end. Their ennui was to last for just 3 further minutes though.

Being their last home action, there is mutual applause between Rapid players and fans, then everyone filed out fairly quietly, perhaps feeling they've just encouraged a mugging.
Posted by skif at 4:19 pm