England win by an innings and 27 runs


As the team ranked second in the world, how do you warm up for the most eagerly awaited cricketing contest with the big enemy who are far and away the best side around? Well, how about the team a lot of people think have been granted Test status before they are ready? The team with only 5 points in the ICC Test championship, a mere 106 behind England (128 behind Australia)? Seems fair. There's nothing like good quality test cricket, and this is likely to be nothing like good quality test cricket.

Still, you've still got to fire on all cylinders, and be professional in these things, and England carried this spirit over from the first test into the first day's play here at Durham's Riverside ground, ideal for a fairly low-key occassion of this nature. While there is a big gap filled up by temporary seating to one side, the fact that this allows Lumley Castle to overlook proceedings makes it rather picturesque.

Only Javed Omer offered any resistance in another low Bangladeshi score but at least this time, you could argue that they were dismissed by good bowling rather than their own shot selection. Harmison's bounce and pace doing for 5 of them, and Geraint Jones snaffling 6 catches as a fuck you to those demanding Chris Read's reinstatement behind the sticks.

The batsman too also took the opportunity to give themselves a confidence booster prior to the real Ashes test. While Andrew Strauss went surprisingly early trapped in front for merely 8, and Vaughan just fell short of 50 despite playing some glorious textbook strokes, Trescothick plundered 151 in about 3 hours, and Bell moved to 57 not out by the end of the first days play.

Certainly gave the drunker fans something to sing about, as rugby style call-and-response songs drift from the south west terrace. On the opposite side of the ground they are determined to get a Mexican wave going (and have been since just after lunch), while they also take the time to torture the guy dressed up to advertise Betfair.com. All we see from our position is a giant turquoise skyward-pointing arrow suddenly drop beneath the advertising boards, only to stagger up again after a couple of minutes, his huge trangular 'head' obviously causing tortoise-style re-righting problems for a time. However he is then rewarded by his captors with a chant of 'blue, blue, blue arrow!!' Ah the game of gentlemen.

The group of rugby boys attempt to conjour up some new tunage but their attempt at 'Two Little Boys' is stifled as a large gentleman near to them decides it's his moment of glory and delivers the entire thing unaccompanied. He's hardly Russell Watson, but it's a mesmerising performance.

All of this and you barely notice that 200+ runs have come in the final session of the day, when half that would be the norm. Little would we realise that the following day would see 494 runs runs in total, and the majority would come from Bangladesh. 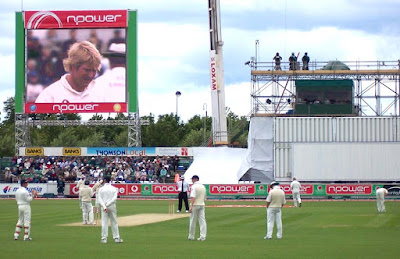 Turning up for the second day, and all the talk is of when England will declare, and will Jones and Flintoff get a bat, when they missed out at Lords? Will it be over today, even?

Once England do declare at lunch, 343 runs ahead, it looks increasingly likely that those of us with tickets for days 1 and 2 may indeed see an entire Test match. The crowd are slightly less boisterous today, perhaps numbed by watching Bangladesh bashing the England bowling around the park for two sessions.

In fairness, the England field was set on firm attack from the first over so there were many gaps in the field to exploit, but exploit them they did, and fair play to Bangladesh, particularly Javed Omer, put-upon skipper Habibul Bashar and dogged lower-order man Aftab Ahmed who all pass the 50 mark to warm and genuine applause from an impressed Riverside throng.

The day looks to be petering out before 2 Hoggard wickets just prior to close-down mean England can request the extra half hour to try and finish it, but the half an hour passes with only 1 further and therefore 2 men still to take.

As it goes I only miss 3.5 overs, as the game is finished within that time on the Sunday morning, by which time we are on our way to Old Trafford, but more on that later.

It's a shame Bangladesh couldn't make us bat again, getting within 30 runs, as they didn't deserve an innings defeat based on their dogged, and occassionally flourishing, batting display in the second innings. Yet despite Hoggard losing his rhythm and Batty not showing anything that would worry Ashley Giles overly, England wrap up a quick and fairly effortless win.

Difficult to say what this means for the 5 Ashes tests. Barring bad weather, the Hobo Tread will make its way to its 'home ground' of the Rose Bowl next week to see who can strike an early psychological blow in the cartoon cricket Twenty20 slogathon.

On the basis of this test, you can see the effect one day cricket has had on the pace of test matches, but whatever the one day results, consistent and big performances, as well as shrewd tactical acumen will be required to bring the Ashes back to our grip.
Posted by skif at 7:54 pm