There was me thinking my football season was over, but following an aborted trip halfway to Prenton Park back in March, the play-offs throw up a further opportunity. Second leg against Hartlepool, who hold a 2-0 lead from the first leg. Their Victoria Park is quite a small ground, and would be dwarfed in the Championship, but a sizeable proportion of their home gate appears to have made the trip to see if their team can get to a Cardiff showdown with Sheffield Wednesday to determine next year’s Championship newbies.

Have had a soft spot for Hartlepool since working with a Pools fan for several years down in Havant, and visited their ground last year. It’s small, for sure, but nicely appointed, a favourite stop on the ol’ hobo tread. I also like that rather than be embarrassed about their town’s apparent history, they actually embrace the term ‘Monkey hangers’, and elected their giant primate mascot as mayor. A very special people. 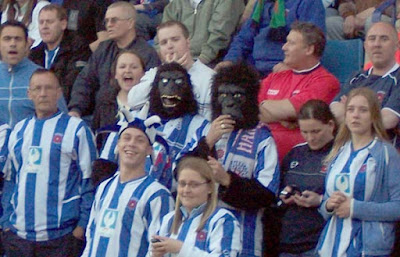 However, what’s not to like about Tranmere as well? Constantly in the shadow of Liverpool and Everton across the water, recent cup runs (including that amazing 4-3 win, from 3-0 down, against Southampton a few years back) have shown they can offer up quite a few surprises. With that Saints tie still living large in the memory, a huge banner on their giant Kop proclaiming ‘Bouncebackability’ suggests they fancy their team to get back the deficit, and they appear positive at half time despite the lack of goals, and the fact that their talisman, Jason McAteer, has to be replaced after 20 minutes, injured and weeping because he could take no further part. Can’t knock that sort of passion.

The other sort of passion is going on in front of me as a Tranmere youth has a running verbal battle with a member of the Hartlepool young team. However the noise of the crowd and the distance between them actually makes it more like a particular aggressive edition of ‘See Hear!’. This goes on all game, but it is a sideshow to an excellent tie. 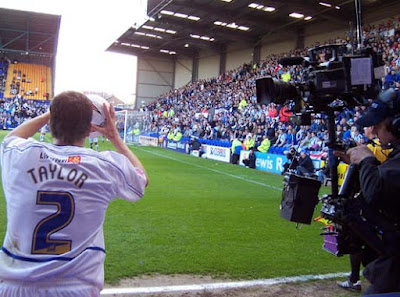 Certainly the atmosphere is hot all round and Prenton Park is pretty packed compared to their usual expectations. It is only the atmos that’s hot though and having not done a midweeker for a while, I forget how much the temperature drops even in May. As it is, I’m nithered stiff (as they say in Leeds) by half time.

Tranmere, particularly in the second half, make all the running, battering the opposition down the flanks and the Pools goal appears to live a charmed life until finally a Taylor free-kick lifts over the wall and out of the grasp of Konstantopoulos on 70. Again the pressure is kept up and David Beresford’s sweet curled shot past defence and keeper to get the tie level with 3 minutes to go sees Prenton rocking. Our friend in front (seen clapping and chanting to his own tune below) gestures at his new friend in the away end shouting hoarsely, “2-0 down, 2-2 up”. 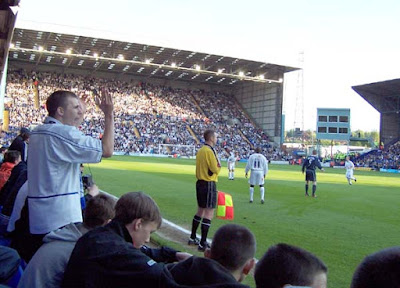 So extra time and tired legs means the tempo changes and Hartlepool finally get some chances of their own, but ultimately it always looks like it’s going to penalties and so it goes. After a save each side, it enters sudden death and an eerie kind of calm descends on my section of the crowd. Discarded remnants of fingernails litter the floor. Sharps penalty, the 7th for Tranmere, is saved and Richie Humphries makes relatively easy work of the winner.

Cruel on Tranmere who have put 2 games worth of effort into this second leg, but Pools have been resolute and dogged.

So that’s it for this season. 52 games not a bad return.

Got a few ideas of where I want to get to next season, certainly I will be making use of my time at the Edinburgh festival to check out some Scottish League action.

Any suggestions of Scottish clubs to visit or clubs (best to be northern) for next season are welcome in the comments. If anyone has a burning desire to see pictures of Atherton Laburnum Rovers taking on Abbey Hey, or some such, then do let me know.
Posted by skif at 7:37 pm