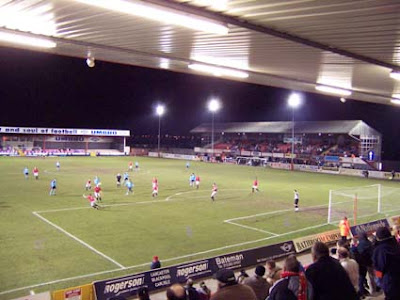 So, yeah, one of my motives in legging it away from the posh gaff was to make use of Morecambe’s close proximity to Lancaster, where I was attending a 2 day training conference. I hadn’t realised just how close until I stood on Lancaster station, which affords a view into Lancaster City’s Giant Axe ground, and noticed the floodlights of Christie Park burning like agitated fireflies in the distance, 4 skinny lighthouses beckoning this ship onto the rocks.

On walking up toward the ground, the looming North Stand beckons you in, and it is where the majority of Morecambe’s fans congregate. They make a fair bit of noise, but the most regular tune tonight is ‘….you’re not very, you’re not very, you’re not very good, in fact you’rrrrrre shit and you know you are, you’re shit…”, a nice segue, but a bit limp in the banter stakes. They don’t face great competition though as, understandably, few Aldershot fans have made their long midweek trip. However someone has rounded up the collected bedsheets and flags of the team’s sizeable regular support, chucked them in their van and now hung then in a long line across the unfussy South terrace. It appears the supporter to flag ratio is roughly 1:2.94, not even English cricket’s Barmy Army can compete with that liberal distribution of George crosses and proud banners, man for man (and flag for flag). 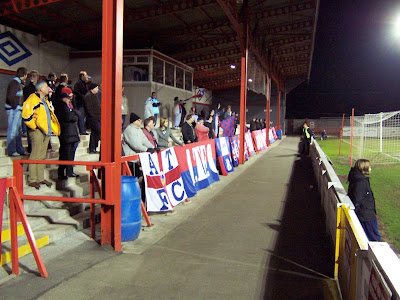 Morecambe fight acres of cloth with the sound of music. Not only is there a drummer positioned at the tip of their hardcore gathering on the North Stand, but he is surrounded by fellows troubadour hammering at a couple of cowbells. I knew about the seafood, but a bovine association I was unaware of. In addition to the Waits-like junkyard orchestra at the back of the stand, there’s the nicely eclectic selection of tuneage booming out of the PA prior to kick off . Amongst it is a tune seemingly entitled ‘It’s Morecambe FC’ (Yeaaaaaah, yeaaaaaah, yeaaaaaah). Some of the fluffiest pub-indie you’ll hear but breezily recorded. Not sure it has the same intimidating effect as an All-Black haka though, all the warpaint in the world couldn’t make it sound anything other than anaemic.

That’s the problem with footy songs though, especially those about one club. I mean, how far can they go lyrically, apart from to say ‘our teams great, innit’ in a variety of corny ways. Like football chants, they are unlikely to provide a dichotomy of the social ills of the time or, say, a lyrical history of the overthrow of Batista. Billy Bragg could always mix his themes pretty well in this way, but not in amongst an ode to the general goodness of a Nationwide Conference side. 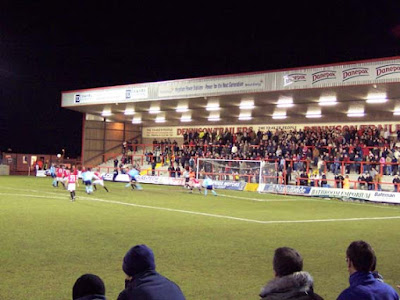 Anyway, the chance to appreciate some vacuous soccer poetry aside, another reason for coming tonight is my hope that Morecambe (Yeaaa…, OK I’ll stop now) can put a dent into Aldershot’s play-off challenge. Usually I am not the sort of numbskull to develop a hatred for any club simply because of a rivalry with one’s own, or for any other reason. Banter is fine, but despising clubs and opposition supporters simply ‘cos’ has always been anathema to my polite sensibilities.

But then there’s Aldershot. I don’t hate them, but there’s something that makes me want them to lose (although, in fairness, I am not overly bothered when they don’t). Maybe it’s that I’m jealous, as an H&W supporter, of the size of crowds they can command. Maybe I don’t like the fact they have an element of their support which is a little unsavoury. Or maybe it’s because every time my team plays them, including in showpiece county cup finals at St Mary’s, they always win. The fuckers.

So, as I say, for illogical reasons, and reasons which shame me, I wanted Morecambe to inflict some pain. As it was they applied a very thorough anaesthetic, but couldn’t make the vital incision. After an uneventful 1st half, where the only real chance of note went to Morecambe (a case of the ol’ Toblerone boots causing the ball to spin toward the corner flag), the Shrimps were firmly in control in the second, battering the Aldershot goalmouth, with crosses and shots while running rings around the defence. The Aldershot keeper was forced into more than one panicky punch, but Morecambe could not break down the resolute defending to score. 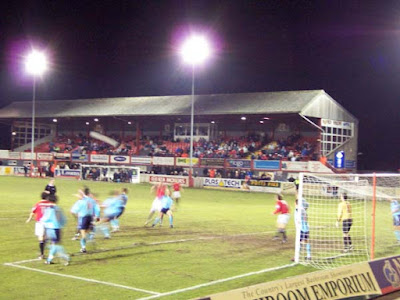 With virtually the final kick of the game, Aldershot almost achieve the height of the offensively Turpin-esque, as they hit the back of the net on a rare break. For the sake of all that is good and pure, it is disallowed. A player being offside may also have played a part. Either way Aldershot can have few complaints of leaving Lancashire with a point.
Posted by skif at 12:15 am