That King George V apparently proclaimed ‘Bugger Bognor’ as his last words is well documented. If he had lived for 10 more seconds or so, he may well have added ‘and Blackpool can do one as well’.

I’ve always had a morbid curiosity about Blackpool without having any pressing desire to spend any quality time there and certainly not to make a special trip. An hour or two based around a visit to Bloomfield Road seemed just about enough, and so it proved.

What do we think of, when we think of Blackpool? Perhaps booze? Bawdy postcards? Bingo? Oh, and perhaps the beach, if the summer is being kind, with a traditional and triumphantly tacky promenade very much in place. Alongside the shellfish and slots though is a fair amount of sleaze; for example, gelatine ‘wobbly willies’ on prominent display within a child's easy reach. Just down the way the ‘Kiss me quick, squeeze me slowly’ hats are rendered quite quaint and archaic by the ‘If it’s got tits or wheels, it’ll be trouble’ t-shirts stocked adjacently. High class, you will note.

Amongst all of this are a fair amount of mystics and palm-readers on the seaside strip, including 2 booths for Gypsy Petulengro who has been in place (well, places I guess) for over 40 years. Her vestibules are littered with 10x8’s of the Gyspy herself with her more famous clients. These pictures give an insight into the cultural life of Blackpool, as Russ Abbott rubs black and white shoulders with Roy Walker, Isla Fisher and Keith Chegwin. Blackpool, it seems, fell into a black hole in the early 80’s and for this reason, it is a town that allows Cannon & Ball regular work. End of the pier comedy occurs in seaside ‘resorts’ all around our island nation, but yer Jimmy Cricket’s, Bernie Clifton’s and the like surely take time before shows in Bournemouth, Skegness, Great Yarmouth or wherever, to place down their prayer mat and genuflect towards the north west.

I am also amazed by the clusterfuck of shops, all elbows in their jostling for position in the tightly packed town centre. The famous Tower looks down upon all of his, like a monolithic all-seeing ‘I’ above the messy, scribbly paragraph that is Blackpool. Can you tell yet that I’m not a fan?

Blackpool FC’s stewards are similarly not fond of my goodself either as I was asked to stop taking pictures about half way through the opening period, as I had not paid for press accreditation. Fair enough as it does say ‘no recording’ on the back of the ticket, so I stopped, but those I had taken were not deleted. I should point out that I did not require to gaffa tape my camera to my stomach or wedge it between my arsecheeks on exiting the scene to bring these pictures to you, but they are contraband nonetheless. It’s not quite smuggling footage of human rights abuses out of a war torn state, I grant you, and I’m not expecting to be head hunted by ITN any time soon. 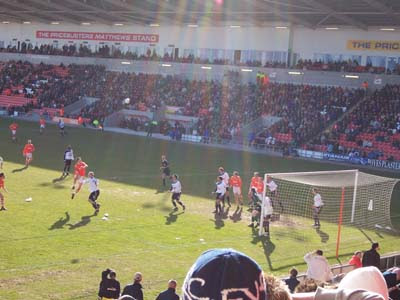 So half the amount of usual snaps, but then there is effectively only half a ground now at Bloomfield Road. An impressive structure that curves round the north west corner admittedly, but to the East, there is an uncovered golf tournament style stretch of terracing, for away fans to get nice and wet in the winter. To the South, there is nothing at all, except the Bloomfield Road bridge replacement works and, in the distance, the curve of the Pleasure Beach ‘Big One’ rollercoaster rising into the skyline, although not so terrifying as it might normally be when only taking up an inch of distant perspective. 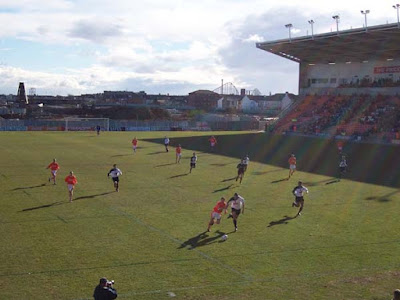 The Blackpool crowd are in good voice and seem very keen on their new gaffer Colin Hendry. They are his tangerine army and point this out regularly. It is clear though that he is a recent recruit to managerial ranks as when a ball spoons up and off towards the dugouts, rather than grab for it, he goes for the big defensive header. Well, that is the intention. A distinguished playing career such as his should not though be measured by a clumsy loop back skywards via a bonk on the tip of his bonce. He was possibly rendered slightly off balance by his three quarter length thin leather coat, which also manages to give him the look of a career spiv circa 1989.

It is unsurprising that the Blackpool faithful have plenty to sing about as their team today come straight out of the blocks with some exciting attacking play. Walsall look fairly lacklustre by comparison, and not just in terms of their kit colour. Indeed, the contact of bright sunshine upon the blistering iridescent tangerine that is Blackpool’s home kit means that like a lampshade bound moth, my retinas are due for a solid burning this afternoon. The spots may take days to fade.

If there wasn’t enough to keep us interested on the pitch, infighting begins in my section, with 2 eventually led away. Rumour has it one has revealed himself as a Preston fan. Considering the Lancashire rivalry, he is perhaps to be thought of a little foolish, his Icarian wings now nelsoned behind his back and hampered by steel cuffs. Needless to say, I decided to play the H&W cards close to my chest, not that there is a bitter rivalry there. I certainly did not want to create one though and continued to sit silently taking in the Blackpool’s momentum. 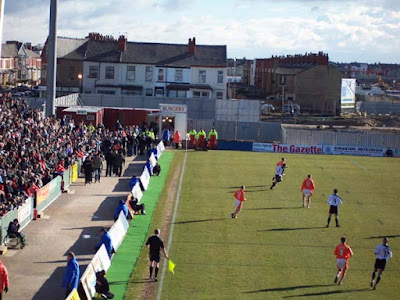 The balance of play continues for much of the first half as the irresistible force of the Seasiders meets the immovable object of Walsall’s resolute defence. However, a twist is to come as we enter the 3 minutes of added time designated for the end of the first half, as Walsall go on a break that eventually requires a last-ditch goal-line clearance. From the corner, too much space is given at the back post and an easy header is pushed towards goal only for it to strike the upper arm/shoulder region of Richie Wellens, defending on the line, which results in a Walsall penalty and a slightly harsh red-card for the owner of the offending limb. Lee Jones makes an excellent save from the penalty, though I think to myself, with their player deficit, can Blackpool keep up their attacking pressure now?

As if to stick a mid-digit in my doubting direction, Blackpool go straight up the other end and earn a penalty of their own. Walsall keeper Joe Murphy, believing the fall to have been perhaps a little soft, raises his hands to Kiegan Parker, which leads to 21-man handbags. Only the quick action of stewards and police prevent the majority of North stand piling in as well. As the dust settles Murphy is rightly tunnelled, levelling things at 10 men per side. The first action sub keeper Dean Coleman is fairly heroic as he matches the efforts of the opposing custodian, diving full length to keep the ball out.

And all this in added time! The most eventful three minutes of my trips around the grounds thus far this season, I’d say.

It remains then 0-0 as the half-time whistle blows, but while Walsall create more at the start of the second period, it is Blackpool who open the scoring, John Murphy slotting it calmly away into the top corner with bodies all around. With 25 minutes to go, Walsall player-boss Paul Merson brings himself on, and while he shows glimpses of his mercurial talent, they are fleeting and lead to no real opportunities. ‘Merson is an alcy’ sing the crowd, mocking even more when Blackpool increase their lead through the 3rd penalty of the game, which again is saved, but the ball rebounds invitingly straight for Keith Southern to immediately atone for his errors.

The Walsall fans stream out and they miss nothing in the final twenty that would make their trip to Blackpool seem any the better. The Seasiders might remain beneath Walsall in the League One table as I write but on this showing, they’ll be playing leap-frog quite soon.

I expect Gypsy Petulengro could tell us exactly when that might be, but not being a celebrity from a couple of decades ago, I’m not sure she’d even entertain my question. The shutters are up on her kiosk as I pass by again, so we may never know.
Posted by skif at 9:58 pm

My good ladyfriend will LOVE your appraisal of Blackpool, where she has fond memories of spending many a summer day as a child.