The story goes that it took several attempts to finish off Grigori Rasputin. Poison, gunfire and a hefty clubbing came his way before he eventually succumbed. I would say that we are the Rasputin of the Conference South, as just as it looks like we’re about to collapse into the snow, we struggle on, but with the fact our season remains VERY alive, we appear to have surpassed the slain Siberian. 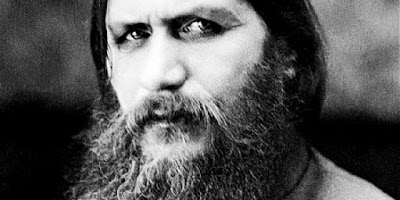 I remarked in my last missive that it was becoming difficult to find new ways to say “another one-nil win, another clean sheet”, so let’s just put it like this. WE BEAT THE LEAGUE CHAMPIONS. Ha ha. You can take your glory tour and push it up yer hoop, lads.

At the start of this game, our lads formed a guard of honour and we all applauded the Conference South champions onto the field. Regular readers will know that, considering who this year’s champions are, our tastebuds were experiencing an ash-y flavour whilst we did so. Beastly Eastleigh. Bloody bastid Eastleigh. Swines. Cads. Scoundrels. Vagabonds. Bad blood? It was like a burnt black pudding once upon a time.

That said, most of the heat went out of it when Shaun ‘good man, a little out of his depth’ Gale and Ian ‘bad man, licker of piss’ Baird left their managerial positions at each club. Prior to that, it was a proper bitch fest, not only on supporter forums, but between the two gaffers. You half expected to see them on the touchline at each derby going at each other’s bonces with granny handbags. I won’t go through all that again as it did get a little silly at times. Check the archive material below.

Obviously we learned through all that business that Eastleigh were the very worst curs of men. Hey, that they should care what I think. They are, as I am reticent to air publically again, the champions. They can retort to any barbs we have with the line “we’ve won the league and you Havant & Neverwillville”. Not a bad line as it goes.

Richard Hill is their equally bald replacement for the toilet seat truffle hunter that was their previous incumbent and a man so curmudgeonly Statler and Waldorf come to him for tips. However he has used the considerable monies at his disposal pretty well. The opportunity afforded Eastleigh by their current owners has not been squandered. Whether or not it’s sustainable is a different question. Still, whatever the future holds, next year they will be journeying to relatively exotic places like Lincoln, Macclesfield, Wrexham and possibly Torquay and getting to see what it’s like up there in the highest, and only non-regionalised, tier outside the Football League. We’d all like a bit of that, even if it were only for a season or two.

Thankfully, with this win we’ve put ourselves in a decent position to achieve the same ourselves. After our two draws at home to Boreham Wood on Wednesday and at Weston-super-Mare on Good Friday evening, Dover Athletic had been able to creep back above us with their Saturday away win at Concord. However with three games to go to their two at that point, confidence was still fairly high, despite the visit of the champions. Mind you, before kick off we were all ripping hands off for a point. My pal Shaun even remarked that he’d happily take a 2-1 defeat as long as we could guarantee our brothers in Hawkness, Whitehawk, would gain all three points against le Douvres.

Despite our caution and willingness to put all our eggs into the basket of our final two fixtures against lowly Maidenhead and Tonbridge, we were instead rewarded with a pretty decent game of football. Admittedly the atmosphere didn’t have the malevolent crackle of the Gale/Baird era, but certainly the first half had plenty going on. Whilst not much in the way of cast iron chances, the ball fizzed across both boxes on a number of occasions, one of which saw our beloved between-sticks big cheese Benji Büchel slap a clearance into an Eastleigh player which then rebounded onto the post. Somehow it stayed out. We’ll assume Benji meant it, Virgo trick shot action, as his record in his short Hawk career is exemplary. Sixteen appearances, eleven clean sheets.

By this point though we already had our lead. Remarks had been made a couple of weeks ago that we had very rarely scored early this season. Thus we scored in the 8th and 10th minutes to beat Bishop’s Stortford last Monday night, and in the 9th minute here. Awarded a free-kick right on the edge of the box, Nic Ciardini calmly stepped up and flumed the ball with extraordinary deftness into the far top corner, Eastleigh keeper Lewis Noice almost attempting a Fosbury flop in his unsuccessful attempt to keep it out. Too little, too late from him. Noice not seeing it, to see that nice.

As we have done so often, we held out under pressure in the second half, danced on the terraces like toddlers at a wedding and waited to see how Dover had got on. They had clawed back a half-time deficit to draw which meant that not only do we leap-frog them, the situation for us is now clear. They only have one game left and only three points possible. We are two points ahead with an extra game. We need two points from six against first a Maidenhead scrapping for survival, and who beat our fellow play off scrabblers Ebbsfleet today, and/or against already relegated Tonbridge Angels away next Saturday.

For a long time it’s felt very “possibly, but y’know, probably not all things considered”. Now it all seems very real, and nudging over the edge of possible. We musn’t get ahead of ourselves. Those points will need to be hard won, especially with Maidenhead needing those points every bit as much as us. So, upon Westleigh Park we will descend on Wednesday knowing one more win will extend our season.

Tension, excitement, fear, giddiness - this is what it’s all about. I can’t wait.

Top picture: Rasputin. A proper beard there. I publish this as illustration of the opening paragraph but also as immersion therapy for my friend Ade, an unrepentant pogonophobe.

Having been at the Eastleigh v Basingstoke game on Easter Friday, I was disappointed not to hear a single anti-Hawks chant. It's all "Salisbury City this, Salisbury City that" these days with them. They appear either to like us, or not to care at all.