You find us at the end of an exhilarating week. Two weeks ago we sat hunched against a fence, cutting onions and pretending to have grit in our eyes; full of despair we woz. A fortnight hence and we feel swelled, alive, erect and bouncing like a tossed caber; full of pride we izz.

What, you might ask, are the sources of this pride, considering this time fifteen days ago, we’d have happily seen them all tar and feathered and displayed in Havant town centre as a warning to others about the futility of hope? Well, let me give you the details…

When your tormentor kicks sand in your face in front of your best girl, you have two options: run to the safety of the beach hut for good old cry, or you get your postal order over to Charles Atlas’ people and reach for your bullworker. And to think they used to call us SKINNY! 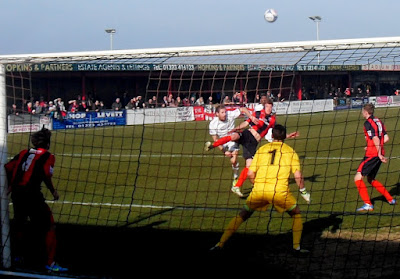 So, yeah, we could not have asked for a better response, especially when we are playing a fixture every couple of days from now ‘til late April. Some would consider that a daunting task but we are going about it as though we are Sir Ranulph Fiennes beginning a new assault on Everest and replacing the rope and crampons with a space hopper. Tally ho! Boing Boing! etc.

Four games in the last eight days. Tough? I guess, but having played those 360 minutes, those six long hours, we have not conceded any goals and scored eight. I guess you could say we would be expected to beat a Wessex League side in the Hampshire Senior Cup, but also in that packed period, we have played three Conference South games away from home; a tough ask at the best of times, let alone in such quick succession. Yet, we have won all three without having to pick the ball out of our own net at any stage. To put it mildly, this is not relegation form. “What kind of form is it, Skiffoid?” Well, I’m not sure I’d like to say...

We’ve had injuries and illness to contend with on the way and the squad is being used to its full potential with not one but three goalkeepers used in the last week. Here at Eastbourne, for the second time this season, eighteen year old Academy shaver Charlie Searle was called up late to take the gloves.

First choice Scott Bevan, who played on Saturday and Monday was feeling a twinge in his back whilst Benji Büchel, a Liechtenstein international currently on loan to us from Bournemouth (and who played in our 2-0 win against Boreham Wood on Wednesday night), was laid low with a bug. Charlie did himself proud when stepping into the breach at Bishop’s Stortford back in September, would he be able to do the same again?


After all, getting a result at Eastbourne is never an easy task, especially with defensive legs tired from an extensive pounding this week. However, straight from the kick off it was clear we had a fourth wind, making the early advances with Scott Jones missing with a header after only six minutes. In fact we looked fitter than we had at the start of this collection of fixtures, the slumbering first 45 at Hayes & Yeading, replaced with a gung-ho mentality. It’s amazing what a bit of momentum can do.

At the back, all was steady, young Charlie commanding his box well and claiming all comers. It’s a confidence thing, certainly our midfielders are getting all giddy about their abilities from outside the box in recent times too. Fair enough really, as we’ve hit some reet pearlers this season, indeed we’ve been having our very own goal-of-the-season contest in the last week alone. On Wednesday at Boreham Wood, Perry Ryan finished off a training-ground perfected free-kick move with a welt into the bottom corner, whilst left back Daniel Blanchett also joined in, looping in a cheekily opportunistic lob from 30 yards out.

Clearly Nigel Atangana watched both these finishes closely, and popped up with a strike which combined the best of both after half an hour here. Receiving the ball about 35 yards out, he turned his marker deftly, took two more strides then unleashed his goodness with all the serenity of a man fresh out of a sensory deprivation tank; a shot so crisp that once it popped, it could NOT be stopped. When they say it only takes a second to score a goal, they weren’t talking about this one, cos it was one of those where for those watching behind the goal, the journey from foot to net appeared to last a good minute or so. GORRRRRRRGISS.

Yet, this was not the real source of pride from the fixture. With legs heavy from overwork, Lee Bradbury introduced our final remaining subs with about half an hour still to go. This always comes with a risk of course, and indeed within a couple of minutes, Charlie Searle went down with a thud after being caught on the side of his head by some Eastbourne knee. Treatment lasted a while, but Charlie got up for his standing eight-count and carried on.

A slender lead with ten men and a fourth keeper in a week chosen via the picking of straws would not have been ideal. Was a groggy young scamp any better? We would just have to hope so, but he’d proved himself already in the game with a handsome flying one handed save late in the first half.

Protected by a strong and spirited rear-guard defensive display, Charlie was able to get through the remaining half an hour, which felt like a couple of days, before retreating to the grass for some additional treatment as we bopped and jived on the terraces, celebrating one of the great Hawks backs-against-the-wall performances.

“What his name? CHARLIE SEARLE” we bellowed, doffing our caps to the fact that although his world had been looking like a woozy, acid-fuelled, psyche-rock video for thirty minutes or so, he met every test. He was able to stretch up high and catch corners speared in and designed to make him panic amidst the nag of bruising and the twittering birds flying around his head. He was also fine to fend off the close attention of their big lads, their beefy central defender Ian Simpemba playing virtually as a striker for the last ten minutes, but to no avail.

I can’t tell you it was a joy to watch in real time, it was tense, nervous gear but the sort of thing that in retrospect, in the context of three points defiantly earned, that gets the hairs standing on end and pride drilling through the veins like an exocet. All Hawk gents present and correct at Eastbourne will have no need of Viagra for the foreseeable future, I can tell you.

Even in adversity, we are so difficult to beat at the minute, opposition heads making little indentation on the brick wall we have erected. One can only hope this can continue as this coming midweek sees two further league away games, followed by three home games in six days. It’s going to be tough to keep this up over two months but you can’t fault the response thus far.