In 1964, pop art provocateur Andy Warhol released Empire. It was an eight hour silent film consisting of one continuous but slow-motion shot of the top of the Empire State Building. Despite this, Empire still contained slightly more incident than this game here at Chelmsford.

Actually that’s doing it a disservice, given that our loan keeper Benji Büchel had to make an immense point-blank save very early on in the game. After that though, we were thumbing through parish newsletters and books on the history of shelves just to, y’know, keep our adrenaline levels up. 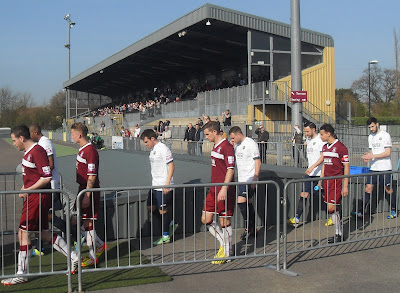 However given the punishing schedule we’ve had for the last month, I’ll certainly take a 0-0 draw away from home that’s light on action but heavy on work ethic. No complaints from me. Although it doesn’t really give one much to write about. However seeing as this was our last fixture in the month of March, perhaps we should take some time to look back at what’s gone on the past four weeks.

At the start of this month, we had just experienced the biggest disappointment in this clubs history; our hearts as broken as our faces were brave. A trip to Wembley had been denied to us all, players and fans, and all we could do was look forward, and indeed up. At that point we still had half a season still to play, ten games behind on some clubs and a whole lot of catching up to do. To be even spoken of in the same conversation as ‘the play offs’ seemed too tall an order, requiring a superhuman effort to get us through three games per week, especially with the exact weight of that FA Trophy disappointment still an unknown.

However the response has been as close to ideal as you could wish. We have mounted the seemingly insurmountable, laughed in the face of tiredness, and wedgied the underpants of sleep. [*Adopts Brian Blessed voice*] We need not this ‘recharging’ of which you speak, who will be the next to be vanquished? Brrrring them to us. We give you 48 hours… [*coughs, returns to normal voice*].

The cold hard facts are these. In just 29 days, we have played 13 fixtures. We have lost 2, drawn 3 and won 8 of them and the run has contained so many clean sheets you’d imagine the Magdalen laundries were somehow involved. In ten of the thirteen games, we have not conceded a goal. Given how tired the legs must be and with other clubs not playing catch up to quite the same extent, this has been entirely astonishing.

Given we started the month with the less optimistic among us still looking over their shoulders at the relegation pack and we finish it sixth in the table, just one place, one point and still three games behind Dover who occupy the last play-off berth, all is pretty rosey in the garden. Cos, do you know, it doesn’t really matter what happens from here. If the legs give out now, like an aging pack of acrobatic circus mules, then fair enough, the players have given their all, when it would have easier to have a tantrum at missing out on the Trophy final and lose their discipline and enthusiasm. We have had both in spades and one of the finest, proudest months we’ve ever had.

Our remaining games are tough, away to Staines and Sutton and home to Bromley in the coming week alone. It would therefore seem greedy to ask for more of our ‘March-ness’ to extend into April but hey, I’m greedy.