We like to start as we mean to go on. Not allowing ourselves to be torn asunder by the favourites to win the league and not CONCEDING! ANY! GOALS! I guess we’ll gloss over the part about us not scoring any goals. *Cough*.

This game felt very much like us easing our way into the season. Indeed, Ebbsfleet seemed to be doing the same. No blood and thunder classic to get the pulse racing for the season ahead, more a pre-season friendly with points. 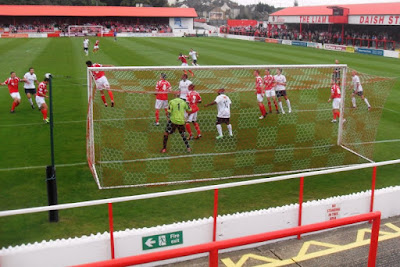 Ebbsfleet have coasted through ACTUAL pre-season scoring a number of victories over professional XI’s, and with plentymuch ££££££££’s (reportedly a £100,000 transfer budget, which is as rare in non-League as a lack of interest in real ale) being tossed about by their new Kuwaiti owners.

So there’s plenty to be excited about at Stonebridge Road, with eight new signings on show here today and a new manager, Steve Brown, attempting to prove himself after stepping into the very big shoes of Liam Daish. This is a task made particularly unenviable when you consider Brown will be constantly reminded of his predecessor by the fact Daishy has a stand named after him, the stand opposite the dug-outs. BE AS GOOD AS LIAM OR ELSE, essentially, in huge red lettering hanging like the sword of Damocles.

Liam was also a legend with us of course, but we never named anything after him. Well, not a physical structure anyway, but scowling and having the general demeanour of someone who’s just found a shit in his slippers will always be known as “doing a Daishy” round our way. We’ve often talked about how we’d like him to come back to us one day but that chatter has been largely absent in the last nine months or so, as we’ve rather taken to our current gaffer, Lee Bradbury.

He’s a class act, and this is none more evident than from his dugout get up. Today he was wearing his light grey three-piece suit, minus the jacket. Stood there in his waistcoat and shirt sleeves rolled up to his elbows, he looked as ready to deliver a best man’s speech or perform close-up magic at a corporate dinner as mastermind a Conference South campaign. Next to him stood assistant Shaun Gale in his baggy shorts and training top, looking like he’d just been cleaning Lee’s car. Frankly, it’s all gone a bit Ted and Ralph in the technical area these days.

Still, thus far it has been a happy union, and we’re much happier with Galey as groundskeeper than lord of the manor. Even today in what wasn’t the most exciting game, we’re largely content most of the time. At one point, when the play was uninspired we complained not, we just took the time to consider potential nicknames for new keeper Scott Bevan by listing all the famous Bevans we knew. We spun through ‘Bev’, Bob ‘The Cat’, Michael and Aneurin before our pal Barry offered “Ken Bevan”. “Who’s he?” we wondered. “He was my headmaster” said our Baz. We may stick with ‘Scotty’ for now.

Back on the field, we may not have the same kind of sponds as Ebbsfleet to flash about but we made life hard for them, and both defences proved their worth. The home side looked marginally the better footballing side in the middle of the park but Eddie Hutchinson was getting amongst them admirably, while Jesse Kewley-Graham was quick to move the ball forward when opportunity arose.

Neither goalkeeper will have left Stonebridge Road believing their clean sheet bonus to have been well earned as neither had much saving to do. Fleet’s Preston Edwards did have to fling himself about to parry away Sahr Kabba and Christian Nanetti shots in the second half, while we had a bit of a late scare when Scotty B punched one weakly off the top of his fist but thankfully it span straight back down into his hands.

Going forward Christian Nanetti and Sahr buzzed around in the usual manner whilst Dennis Oli held the ball up nicely – much more to come from him in the coming weeks I’m sure. It was a good, solid team performance and, frankly, I’d have taken a point here as soon as the fixtures were released. Then again we always would to start off it seems; only once in the last seven seasons have we got anything other than a point. So, who knows what will follow, we’ve had terrible seasons and great seasons from a single point start, although as my friend Mr Ketchup mentioned to us on the train back to Waterloo East, the last time we started with a scoreless draw, we were playing Liverpool five months later.

Ah, the first omens of autumn.