About three seasons ago, we experienced a phenomenon we now refer to as ‘Crazy April’. It was called this because we won our last five games of the season, scoring 20 goals in the process. We went into the final game needing to win by five clear goals and scored them, albeit only after Chelmsford had scored two themselves.

It was the only time, really, in the last five years (post-Cup run) that there seemed to be any sense of giddy abandon around Westleigh Park, the kind we had grown quite accustomed to in the early-noughties days of having Paul Wood, Tim Hambley and Jimmy Taylor as combined creative treasures. However that wildness and lack of restraint has returned, Lee Bradbury winning the Conference South Manager of the Month for a March in which we won five home games and drew the one away game, a tough one, at Dover. 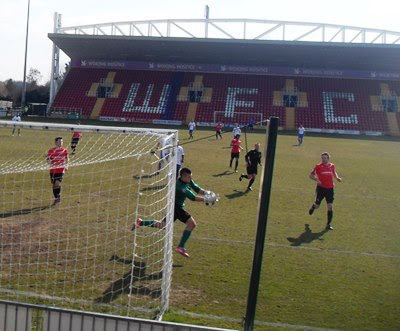 When I speak wistfully of us having an embarrassment of riches back a decade or so ago, this is to ignore the fact that we have three genuinely prime assets at the club at the minute. Ollie Palmer led the league top scorers chart going into this game, topped it up considerably during, and has scored 40 goals in 78 appearances thus far. As goals per game ratios go (0.51 in his case) he’s up there with all our striking greats Rocky Baptiste (85 in 145, 0.59), Dean Holdsworth (34 in 66, 0.51) and Super Jim (138 in 297, 0.46).

The league scouts continually sniff around Ollie and had Colchester United’s transfer window bid two months ago been slightly better than a tin of shortbread and a coffee-stained doily signed ‘To Sandra, best wishes, Les Dennis’, he might well be playing in the Football League now. If he is not there, and still playing with us next season, we should consider ourselves looked upon favourably by the footballing Gods.

The same applies to Chris Arthur who each time he chases with a defender appears to have one eye on the ball and the other on the British land speed record. As hard to handle as a pre-heated baking tray in an oven-gloveless hand and as impossible to knock over as a concrete cow, he is ‘The Beast’ and watching him barrel down the left flank in full flow is as invigorating as damp fingers in a shoddy plug socket. Again with regards Chris we are genuflecting to those aforementioned deities that they might really spoil us for the 2013/14 campaign and keep both Palmer and Arthur in our ranks.

The remaining asset of the three stated I will come back to but, seeing as its paragraph six already, let’s talk about the actual game. The first half was comfy for us, if perhaps a little niggly, and we went into the break a goal to the good, a scoreline which our relative dominance deserved but perhaps fortunate in and of itself.

We’ve been trying a free kick option recently, a three-touch-trick to wrong foot the wall and leave a player, usually Steve Ramsey, to fire at the goal less impeded by oncoming torsos and limbs. Usually, a defending body loitering will stick its arse in the way and send it ricocheting back to the half-way line; today though the practice made perfect. Well, not perfect really, more perfectly acceptable, as a rogue buttock still knocked the ball off its trajectory. Happily though the trajectory hitherto had been towards Milan Stojsavijevic’s gloved paws, and the intervention merely sent it bobbling away from the keeper’s momentum and into the net. It was a deflection so wicked, it might as well have been riding pillion behind a Disney stepmother on a nicked broomstick.

While the first half was about bits, the second was all action, with Hayes & Yeading emerging from the changing rooms much more giving of effort. Indeed, all the momentum was theirs until Steve Ramsey hung a steep cross upon the stiff cold breeze in the 63rd minute. Stojsavijevic, up to that point, had been pretty effective with anything swung into the box but made a mess of it [see pic above] to the point of it resembling an open landfill; all placcy bags and used needles. Waiting behind him was Ollie Palmer who slotted home despite standing virtually on the by-line. The angle was so acute it was like watching keyhole surgery, but in off the far post it went.

Ten minutes later, we gifted Hayes an’ ‘Ding a way back into the game when Clark Masters fluffed a poor clearance directly to Luke Williams who had little to do to slot the ball underneath Clark and his rapidly reddening face. Given the home side’s momentum (I say home side but he we were in a virtually empty Kingfield Stadium that is better known as the home of Woking FC) this could have got very wobbly very fast. Thankfully, we re-established a two goal cushion within three minutes, Ollie Palmer getting behind the defence to calmly instep the ball home.

However, we still couldn’t coast as just a further two minutes later Alex Grant pulled down Tom Collins to give the referee an easy decision to make. Collins stepped up to take the kick but Clark Masters dropped on the poor attempt. Had they scored, we may have been in trouble. As it was, we adopted a counter-attacking method that gave Ollie his hat-trick in injury time. Kelvin Bossman, looking full of energy after coming on, raced half the length of the pitch before putting in a precision cross to the six yard box where Ollie was able to tap in with effortless aplomb.

That was Ollie’s 25th of the season and he’s churning out hat-tricks in the same seemingly endless way as an Estée Lauder production line farts out lipsticks; his third goal-trio of the season, indeed since the turn of the year. His motivation was questioned in the games subsequent to us turning down Colchester’s bid, but since then he has signed a new contract, hugged the manager after scoring against Sutton (something you don’t often see anywhere really) and bagged ten goals in the last seven games alone. His motivation is no longer discussed and he was worthy of man of the match here with or without a matchball in his mitts at the final whistle.

I threw that thing about his hugging the manager after scoring last month for a reason. That third ‘prime asset’ I was talking about is our gaffer. Lee Bradbury has taken a bunch of huge underachievers and turned them from relegation battlers and mid-table settlers to a collective that is making us believe that we have an outside chance of making the play-offs, albeit with another ‘Crazy April’ required which is a big ask given we’ve only just emerged from what we can now remember as ‘Mental March’. He was not a universally welcomed appointment at the start, but show me a chap inside Westleigh Park on a matchday now who doesn’t have a big boy crush on Bradders and I will show you an away fan.

Whereas Stuart Ritchie, the man who started the season in our hot-seat had all the magnetism of a soggy cloth, and the motivational qualities of a photograph of a derelict bungalow, Lee Bradbury has the respect not only of the players and board, but of the fans. We’re in this together now, and we’re loving it, play-offs or not.
Posted by skif at 12:01 am