We’ve not had much luck with the weather of late, experiencing more postponements than Frank Sinatra’s retirement do. Since my last despatch of three weeks past, we have only managed a single further game, a midweek away defeat to Tonbridge Angels. Thus I turned up after this brief winter break still not entirely sure if we’re any good or not.

Five goals last time out, but when the Hawks come a-calling, you’re never quite sure who’s ringing the doorbell – will it be some responsible types returning your lost wallet and reaffirming your faith in the human race, or will you open the door to find a brown paper shopping bag both ablaze and filled with dog logs, as a gaggle of guttersnipes scatter like dropped marbles? 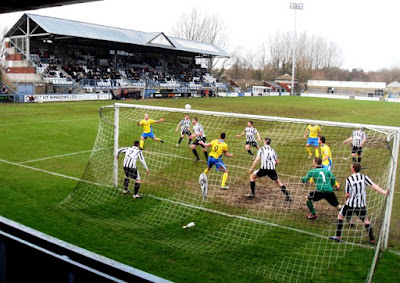 Fair play to Dorchester for getting the game on today following an overnight downpour, not to mention the thawing of the snow that has put paid to many a fixture around the country recently. We now only too well how hard it is to combat the elements, with a crowd of our own hardcore fans (heroes all) turning out at Westleigh Park regularly armed with wellies and shovels, only for referees to decree that a square of the pitch, usually equivalent to the floor space of a small shed, is too boggy for the game to be safely played.

Whatever was thrown upon it from the skies, the game was able to go ahead here, safely, but not necessarily surely, as the bogginess of it meant nothing resembling a flowing move was really possible for either side. Christian Nanetti trying his usual tricks on a surface that looked like a braille Bible was never really going to work, while up front Ollie Palmer did not look his usual dynamic self. However, Chris Arthur’s work bombing down the left flank was certainly worthy of note, while Eddie Hutchinson energetically stomped around the midfield like a man frantically shuttling buckets of water to a number of small, concurrent fires.

Also catching the attention were our two latest loanees. Sadly, as soon as the ink dried on the extension to left back Dan Butler’s loan, a signature which was greeted with great joy and fanfare, Portsmouth enacted their twenty-four-hour recall clause, news which was met with heavy sighs and scratchy violin solos. The transfer window in the Football League had recently opened causing half the Pompey squad to fall out of it. As such Dan, despite his bumfluffed chin and unscuffed satchel, was required to mix it with the big boys and shore up their depleted regiment. Great for him really, but disappointing for us as we had grown rather attached.


However no sooner had we said goodbye to one young Pompey left back, than we said hello to another, Alex Grant arriving by way of apology. Furthermore, midfielder Jesse Kewley-Graham, who has recently made appearances on the team sheet at Wycombe Wanderers as well as on a bronze plaque hanging outside a firm of accountants, has also signed up for a five week stint. With not much money to go around, Lee Bradbury is working the loans system, and has done it pretty well, with both lads impressing here despite the leg-sapping, football-limiting nature of the pitch. It was sticky out there, wood-flooring-in-seedy-back-street-club sticky. Never an easy environment for a young man out to impress; peeling yer soles off the surface with every step.

As such the game descended into a kind of lottery, with the ball rarely falling exactly where you’d want it; getting stuck beneath feet like the fluff from a new pair of sport socks. Both sides had chances, and we spent a great deal of time in and around their penalty area in the second half, but players who probably shouldn’t be given too long to consider their options were being given too long to consider their options. Sahr Kabba, Ollie Palmer and Christian Nanetti were all guilty of thinking this surface was capable of withstanding oh-just-one-more-touch-should-do-it style dithering.

Nil-all was a fair result all told, and it was good to get a game on, but this certainly wasn’t one for the purist. Ninety minutes later and it still isn’t easy to pinpoint exactly where we’re at. A run of four further tough away games awaits in the next few weeks, weather permitting, so it’d be nice to think we’d be going into those at top form and confidence. Next weekend’s home game against Basingstoke represents a good opportunity to firm up on both fronts.
Posted by skif at 1:48 am