Exit Cleethorpes station and you are immediately presented with a big sign. On it a cartoon bear dressed in a sailor’s outfit that only comes down to his midriff, his face wearing the look of a drowsy sex offender, points like Lord Kitchener and says “Hi Kids – welcome to Fantasy World”. Next to him this ‘Fantasy World’s big logo has had chunks taken out of it where errant hoodlums have no doubt welted stones at it.

This can be seen as indicative of many things. First and foremost, Fantasy World being there. That’s being rather literal though, what else does it tell us? Well, Broken Britain perhaps, throwing stones at an insignia with a seafaring bear on it suggests a troubled mind, even if that bear does look like it has to sign a register of some kind every week.

It also betrays the decline of the British seaside town. Where once they thrived, now they cannot compete with cheap foreign jaunts and have given up trying; a helter skelter gathering dust next to a rusting, bent set of fairground train tracks on the beach being another symbol of lost enthusiasm. 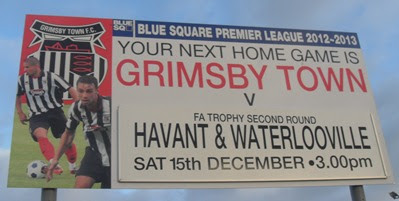 This sense of decay and things needing repair also mirrors the fortunes of the local football club, Grimsby Town plying their trade not only in Cleethorpes but in the Conference, and merely ten years since they were doing so in what is now the Championship. The collapse of ITV Digital in 2002 was the start of the rot and their ninety-nine year stint in the Football League, which included three years in the top flight in the inter-war years, came to an end in 2010.

Grimsby stills feels like a League club, and one can only empathise with what their supporters have gone through in the last decade. The elder members of the Mariners’ support will be well schooled in a yo-yo existence but this Conference stint remains a nadir unless you count their failure to be re-elected exactly a century before their recent return to non-League. That time though they only spent a year in the Midland League before promotion back, however they are now in their third season at this level, with rising levels of desperation to get back to what they no doubt consider their rightful place in the 92. 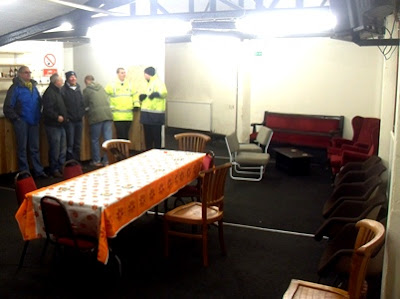 They are certainly going the right way about it this season though, getting over a bad first fortnight (after which they were 17th) to lead the Conference Premier going into this fixture. Indeed, on forums and such like, it was pretty clear that for many of their supporters, this was an irritating distraction rather than a game to be savoured.

It was almost as if some of their fans were unable to acknowledge the FA Trophy as being an actual ‘thing’, like a genocidal maniac refusing to recognise the jurisdiction of a war crimes tribunal. One fan on the Fishy Forum went so far as to remark that “I hope we win as I do every game we play, but this trophy just rubs our temporary tinpotery even more in my face”. Just over a week before Christmas, the crowd of 1,215 was between a quarter and a third of their regular attendance. We could only hope that their team were also taking the competition with so little seriousness that their appearance in it could only be considered as a kind of footballing satire. 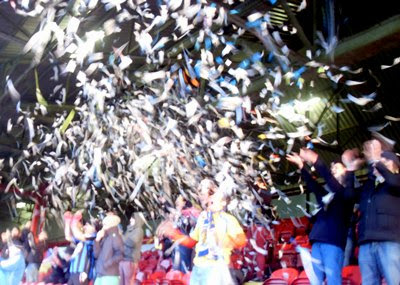 However, having made hard work of dismissing with Buxton after a replay in the previous round, that was probably asking an awful lot. It also appeared they weren’t expecting any away fans to turn up, with the turnstiles and bar in our area still closed forty-five minutes prior to kick-off. A special request was made and once the shutters snapped up, it appeared we were the first set of supporters to make this request since the early 70’s. 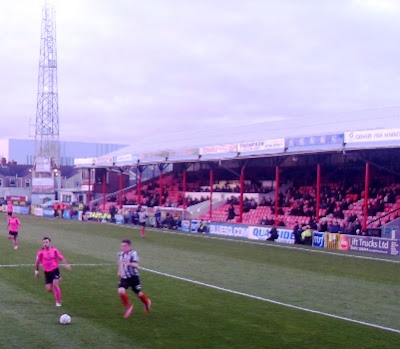 However, for all my remarks gently poking fun at a town and team that has seen better days, one should say that the welcome we received from the Grimsby support and staff was nothing less than cheery – and Blundell Park, despite being all-seater (in theory), is a decent old-school football experience. Also if you want to talk about decline, let’s talk about Havant & Waterlooville as a giant-killing side.

We’ve been fairly lucky over the years, with the blood of several scalpings still on our hands – York, Notts County, Swansea, Crawley (twice), Forest Green Rovers, Histon. Indeed, less than two weeks ago we removed Conference Premier Braintree from this competition to set up this tie, but I can’t view that as a giant-killing, having played Braintree many times in the Conference South over the years (most notably in the play-off semi-finals in 2007) and I imagine it won’t be long before we see them again.

One just gets the feeling that this is the sort of thing we should try to get used to, i.e. being a middling Conference South side that, when placed in society with clubs of a higher standard, will be given a working over. We have quite a young side with Jake Newton at 28 being the granddad of the team, and it showed here, with Grimsby’s concise, unfussy, bish-bash-bosh-job-done style effectively winning the game for them by the 9th minute. 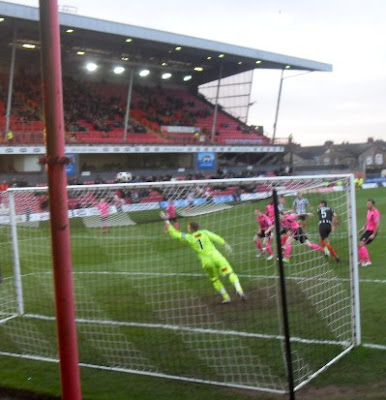 With only two minutes on the clock, Shaun Pearson rose highest to meet a free kick with a header as firm as stale sourdough (see above). Seven minutes later, it was virtually the same, only with Andy Cook providing the forehead as Grimsby continued to dominate us in such a way as to suggest we were being given the cat-o-nine-tails whilst chained face down to a torture rack.

Chance after chance flowed like a steep weir for the home side, with saves and posts coming to our rescue. Rather than harrying and eager we looked overawed, like raffle winners playing a full 90 in a charity friendly against a team containing ten Manchester United players and a loose Wildebeest.

We held out for another twenty-five minutes before another goal came but again it was a closer range header, with the marking slack, which led to it; Greg Pearson being the man to flick it past Clark Masters. 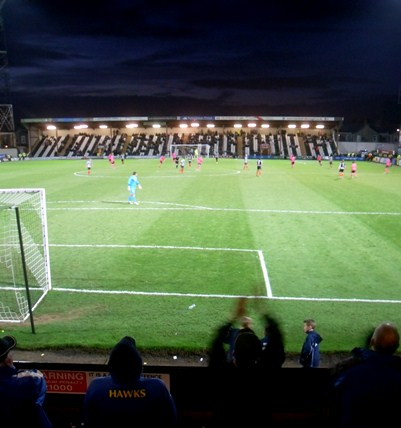 What was particularly cruel was that being a segregated game, something we’re not used to in the Conference South, was that we had to watch these three goals from painfully close range, with the hook of The Fratelli’s Chelsea Dagger being used as a celebratory sting each time. Clearly the PA man doesn’t trust the home fans to make enough atmosphere for themselves on scoring.

If this wasn’t all depressing enough, come the half time respite, the tannoy was then used to play out Mistletoe & fackin’ Wine. Not that I can say much about it, I believe I own an original 7” copy of it, for reasons that escape me. 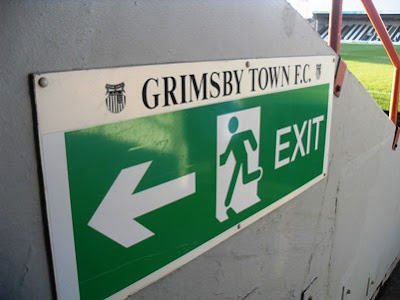 In the second half, Grimsby were able to go about their business without much fuss until a rush of blood to the head caused Joe Colbeck to lunge in on our loanee Dan Butler and earn himself a second yellow (when a straight red might have been more appropriate). Now then, we thought, our 11 against their 10, that should even it up. So, naturally, they scored their fourth within a minute of this, Andy Cook beating Ed Harris and powering a handsome drive into the far corner.

Our best chance, well our only chance really, came early in the second half. Ollie Palmer receiving a Dan Butler cross in so much space he could have spent a couple of minutes lining up a trick shot rather than heading the ball softly and directly into keeper James McKeown’s gloves.

For the final quarter of an hour and our hopes as sunken as the Belgrano, we treated it like a party anyway, pretending we’d scored, singing all the abuse towards ourselves a less kindly group of home fans might have directed towards us (“We’ll never play here again”, “If you’re not going to Wembley, clap your hands” etc.) and requesting that various people in the Grimsby employ do Gangnam Style. The keeper, stewards and wandering reserves offering nought, but a small ballboy shyly offering crossed and bouncing wrists to our great delight. 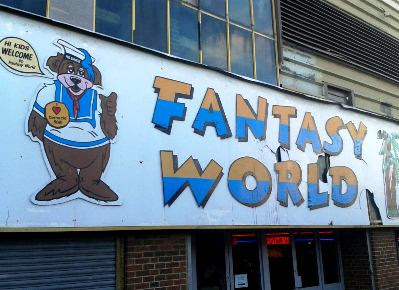 So, yeah, a comprehensive taking apart by a good Grimsby side took place here. No shame in that per se, but the game raising you might expect in these situations never really came. At least now we can concentrate blah blah blah on climbing the table blah blah blah, and that does need concentrating on. Shoots of recovery are there (a 3-1 home victory over Staines last week settling a few nerves), but we still need to be putting a run together.

Finally, once again, for all we might cast Cleethorpes, Grimsby and, well, Barnacle Bear as things on a low ebb, I would not be surprised if the good people of this part of North East Lincolnshire have a League club to watch again come next August. I wish them all the very best in that endeavour.

A great write up - I have supported the Mariners for 40+ years and I can't remember the bar area that you guys got opened up!

Good luck for the rest of the season and my admiration for making the trip!