What a pre-Easter week it has been (and it is Easter week, however much Truro tried to confuse us with their signage – see below). For the vast majority of the season up to that point, it was like travelling through a long, dark tunnel – a journey certainly, but not an enjoyable one. This week a beckoning glow has begun to appear at the end of that tunnel, and we have been trying to determine exactly what has been the source of that light. Was it merely the removal of a manager who had lost the love and trust of all but his closest associates? If anything, that light was dimmed, slightly, by the fact that a committed clubman of twelve years standing had not been able to succeed in the long term, after his early successes in the FA Cup. I emphasise the ‘his successes’ as a lot of his critics appear keen to remove any positive contribution from Shaun Gale’s history with Havant & Waterlooville. To my mind, you credit the man in charge ‘at the time’ when the garden is rosy as much as you discredit him once the weeds have taken over.

The light could have been the spotlights that have been following winger Christian Nanetti along his ‘look at me’ catwalk, as he sashays up and down it like a horny peacock displaying his feathery credentials. He is a creative, chins-up, lets-crack-on-with-this kind of a chap who buzzes ceaselessly around the pitch like a wasp that’s forgotten the door it came in through and spends 90 minutes trying to find its exit through a locked kitchen window. After the utilitarian drudgery into which our season descended after Wesley Fogden took his chimney sweep of a name to AFC Bournemouth, Nanetti has certainly returned a fair amount of oil to our lamp.

Of course, that light could still be the oncoming train of relegation. A change at the top guarantees nothing. This was arguably our most important league fixture in some time. With assistant manager Steve Johnson, and club general manager/fitness coach Adrian Aymes, put in caretaking charge, another defeat might well have sealed our fate. If the brave new world had produced the same result as the deflated old world first time out, that may well have done for us. 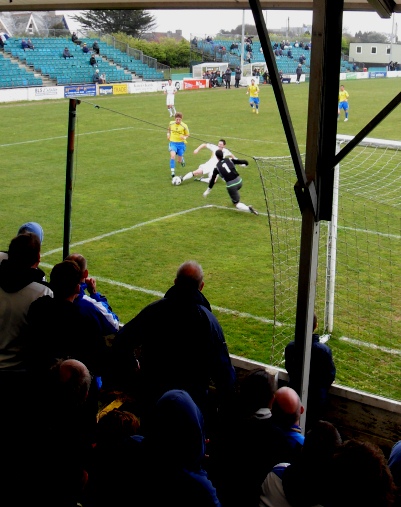 It’s a results business they say, and this was the result we needed, finally, following only two prior such league results in this calendar year, from fifteen fixtures. Thanks to Hampton & Richmond Borough also winning, we remain in the relegation zone, albeit one place higher, so this is not the end of the story. The hope is that it is the start of one we will remember.

In truth, the brave new world didn’t look that much different in a drab first half only really enlivened by Truro’s Arron Pugh almost slicing the ball into his own net, and Martin Gritton for the home side pinging a header against the near post with the defence beaten. It was Truro’s half overall, but with plenty of defensive vim shown by the Hawks.

However the difference in atmosphere was palpable, both for supporters and players alike. Like Atlas on his tea-break, the weight has been lifted from our shoulders, which are generally looser, freer from tension, while our foreheads are far less furrowed. 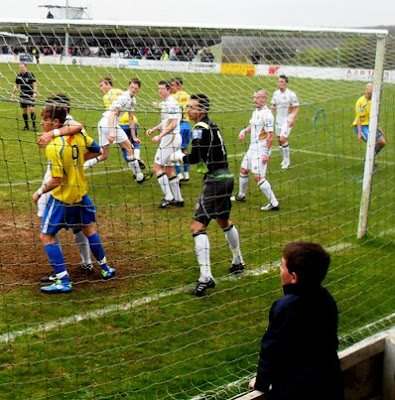 It was never going to be easy coming to Truro, of course. The players rarely have need for an overnight stay in the Conference South, of course, but Truro are out on a bit of a limb, far away in England’s chinny flange, what you might call ‘Cornwall’. We London Branchers met at Paddington station at 7am and returned there at close to midnight, with ten hours of round-trip train in between. All for ninety minutes of football. And a pasty.

In the old Southern League Premier Division days, we’d rock up to places like Kings Lynn, Grantham, Burton Albion and Tamworth without a thought but since level six was changed to two regional divisions rather than three, and with a high concentration of clubs in London and the south-east, we’ve not had much excuse for the 6am alarm call for a big, old beano day out (Cups aside).

Now we’ve topped it all though as we’ve never been further for a league fixture, so we were excited anyway, but add in the ‘new world order’ factor and we were positively giddy, all set with coffee, old school magnetic Travel Scrabble and my fellow Brancher Adam’s iPad loaded up with Risk! That’s right, that’s how we roll. You can keep your boxes of beer and chanting in railway stations, the Hawks London Beat are all about the word games. And using Apple products to capture the Lebensraum.

Our glee was somewhat tempered by the long walk up-hill to the ground and the less than hospitable chilly gusts hammering down it once we got there, not to mention the mizzling rain. It was certainly no spectacle for the neutral. It wasn’t much of one for us after we’d scored either, the majority of our sizable turnout walking nervously up and down the exposed ground behind the clubhouse end goal (you couldn’t call it a terrace) like expectant fathers, eager to get their hands on the celebratory cigar that only the final whistle would bring.

Now, Truro will tell you they SHOULD had a penalty. Being a dweller behind the goal my side are attacking, I am unable to provide any expert commentary about what went on down the far end. Sam Pearce’s challenge on Les Afful, or ‘Fal’ as I shall know him, may well have been a little heavy.

Truro will also tell you that we SHOULD NOT have had a penalty. On this I can help provide a little first-hand colour. They are absolutely right. Barry McConnell’s tackle was clumsy but Christian Nanetti’s movement after it was like something out of Dalton Grant’s repertoire. 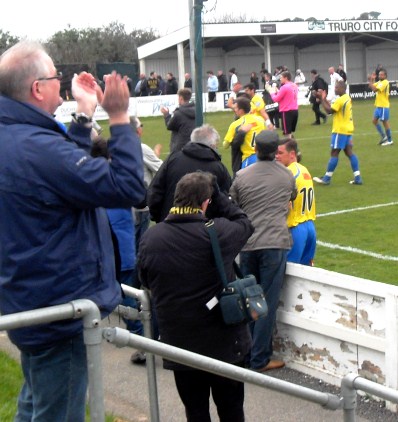 So, Christian can be marked down on moral correctitude in the opposition box, but cannot be faulted for his penalty taking. With regular taker Steve Ramsay having missed a couple recently, Nanetti gripped tight to the ball, placed it down, and sent Truro keeper Oliver Chenoweth the wrong way. Of course, with twenty minutes to play, this was far too early for us to think all our problems were over, especially given the consistency and regularity with which we have conceded goals this season.

As it was though, our team dug in and displayed their collective bollocks with such pride as to suggest we were in the middle of some perverted village fete. Upon the whistle, there was collective fist-pumping and bellowing, the like of which hasn’t been seen in some time.

Five games to go and each one will need this kind of grit. We’ll probably need a few more chances to come in open play, but this was the right result at the right time for us to move forward with confidence that we are capable of winning games and keeping clean sheets.

Not much else will now do to be sure, but we CAN do it. We have shown that now.
Posted by skif at 7:57 pm