So, after all this, it came down to a minute in human history. A minute where our dreams were passed to us, snatched away, then returned almost instantly on a velvet cushion. A minute which will live on as long as there is a Havant & Waterlooville FC, through endless telling and re-telling, as we try to capture exactly what we witnessed and felt. I will try, and almost certainly fail, in the paragraphs to follow.

After all these final weeks of permutations and endless attack upon one’s own fingernails, after those long winter months of grey weather and greyer performances, it came down to the final touch of a football by a Hawk player in the entire season. This was brinksmanship of the highest and most perilous order. And, as a result, utterly wonderful. I’m not going to say it made all the worry and the drudgery worthwhile, but part of me REALLY wants to. Because this... THIS… feels amazing.

Let the word go out to all the non-League social climbers out there. We’ve just finished 19th. And it feels as good as, if not better, than beating Notts County on their own turf in the FA Cup. Yeah. You heard. We are giddy. Collapse into a chair and exhale heavily giddy.

Thanks to madly incessant precipitation, some were worried that the fixture might not go ahead, but we kicked off on time and in-line with all others in the Conference South, on a pitch heavier and soggier than Giant Haystacks and Big Daddy sharing a roofless rickshaw in the rain. 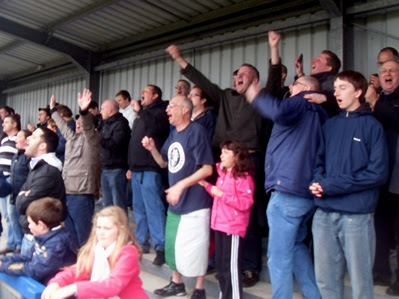 There was plenty of skidding about on it too, Scott Jones in one early chase sliding along the turf in such a way as to suggest three winter Olympians were frantically swishing brooms in front of him. With the ball running on so much, and our tendency towards the overhit pass, you could tell then that for all our good intentions, it might be a frustrating goal-kick heavy day.

And knowing that only a win would be enough if either Maidenhead of Hampton & Richmond were to do the same, it was a cause of some deflation when Staines, with nothing left to play for, took the lead through a calm Ali Chabaan finish in the 19th minute. Given that the last three games have seen us go 1-0 down and be unable to do anything about it, terrace chins appeared to drop.

Happily, this was not replicated on the field, as three minutes later Chris Arthur’s superb run and cross was met by Scott Jones who guided the ball home expertly. Less happily, Staines then re-established their lead virtually straight from the kick-off, Kyle Vassell burst through and beat Dan Thomas to a shot which bobbled over the line. However, perhaps because we had now scored (after 345 blank minutes prior to kicking off here) there was less of a sense of fatalism hanging about.

Even when Christian Nanetti won yet another penalty, this his most clear cut one yet, and missed it for a change, there was not the ‘well, that’s that then, it’s not our day’ kinda fug clouding us totally. It was clear that Staines had done their YouTube homework here, and did enough psyching out to ensure that Christian flumped the ball wide of the post. 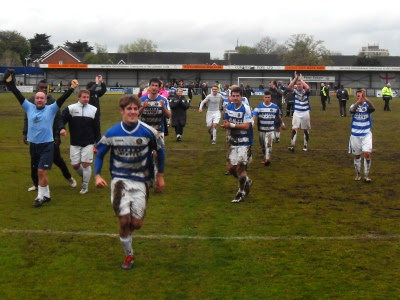 With the knowledge that Maidenhead were leading in their game against Eastleigh, we knew that we would need to score twice more to stay up. Had we got to half-time still a goal behind, going into the dressing room nervous and lacking confidence, it all might have been different. However, we went in buoyant, having equalised just three minutes before the break, Ollie Palmer scoring a proper striker’s goal, Steve Ramsay’s eager cross being angled in off the post by the Palmer boot. Excellent finish, excellent timing.

Nonetheless we came out for the second half, still aware that Maidenhead’s score would send us down as things stood, and so the moments queued up to be described as agonising. In theory we were given an advantage in the 56th minute when Staines were reduced to 10 men. I say ‘in theory’, as this has happened a lot lately, and mostly in games we have gone on to lose and score no further in. Omens, oMEns, OMENS! Aaaaagh!

After this we piled forward in bursts, Joe Dolan, Sam Pearce, Perry Ryan and Scott Jones all being presented with chances that either made their way softly into the arms of Danny Potter or were shanked into the middle of next week. All the while the grandfather clock in our heads was ticking ever more loudly. So there we were teetering, like Michael Caine and a loada gold over an Alpine ravine. 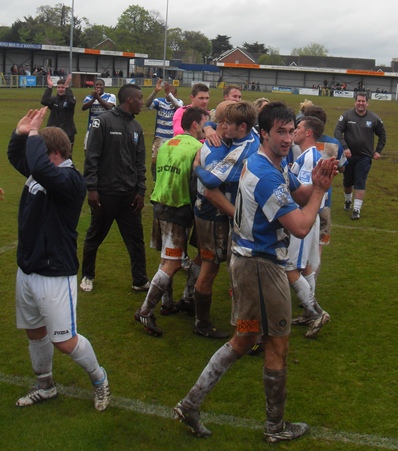 As you can tell by this point it was all getting rather squeaky, but news was filtering through from York Road that our always good friends Eastleigh had done us a favour by recovering a two goal deficit to equalise and then take a 3-2 lead. Even when Maidenhead brought it back to 3-3 we were still fine. However the nagging thought was that for all our staring at twitter feeds, all it would take is for one single tweet to blow apart our bonhomie.

Then it came. The board had been shown to indicate that there would be three minutes of injury time. An “oh God” was whispered at the back of the terrace. Maidenhead had taken a 4-3 lead against Eastleigh to relegate us at the death.

Y’see, I had it all pre-written in my head, in case the worst happened, about retreating and regrouping in the Southern League, worse things happening at sea, no-one died, that kind of thing.

What I had not seen coming was having to describe the difference between remaining a founding and ever-present member of the Conference South, or returning to a Southern League diminished in status since last we trod the boards there, as being a 93rd minute toe-poke blurt, following the kind of penalty box melee that only crisis and desperation can bring. 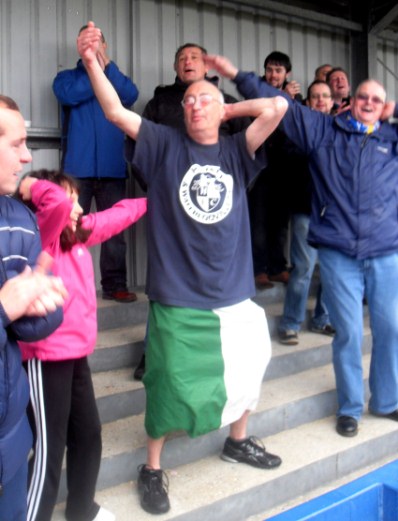 Joe Dolan is not the most cultured of footballers. He is the dogger’s dogger. It would be fair to say his three months with us have not been littered with great moments. Yet now, in his locker, is the GREATEST MOMENT! Anywhere. Ever.

When in the society of a football, Joe is usually inclined to put the pistons behind it. If ever a situation demanded a lack of cuteness, it was this. Twice in the dying moments, Ollie Palmer with his back to goal had struggled to turn and get a shot away. Joe, fed up with all the fannying about went at it like a juggernaut through a sapling, hitting the net and causing the kind of PAN-DA-FACKIN’-MONIUM that will cause gooseflesh to bump, bring mist to the eyes and pump-action to the fist whenever it is brought to mind.

Months of moaning and aeons of agony. Then a single moment; a second in time from boot to goal. A few more seconds to shirt off n’ bundle. Seemingly forever for the chaos to die down. Eventually as joyful tears are dried, and adrenaline grins melt to a satisfied, excited tingle on the nape of the neck, Staines kick off once more, only for the ref to instantly call a halt…

That was a fantastic match. How the Non-League Paper could only give it four stars, I'll never know. There aren't enough stars in the sky for that final moment of utter punk rockin' joy! I've put some pics up on Hopping Around Hampshire, but they're mostly of mud!