Well, I think we played our part. We the supporters I mean. And we must give nods to the new vice chairman, Jim Fallon, as well, forking out for some free coach action that meant a bigger Hawk mob could collect in what my terrace pal Simon describes as the ‘Fur Coat No Knickers’ stand. We had tickertape, we had balloons, we had singing going well before kick off. We were pumped.

Then we conceded after three minutes. Faces hit palms.

So, about this fur coat and lack of undergarments. Last time I came here, in 2007, this ground looked very different, if only for the fact that a club with a different name was playing in it. 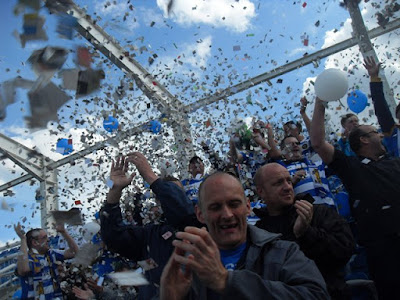 Farnborough TOWN FC were a financial basket case and were liquidated just a couple of months after that last fixture I witnessed here. League restructuring meant the new club only had to face a drop of two divisions, and started again, swapping red and white stripes for Farnborough Town’s original colours of yellow and blue. It wasn’t the only thing they brought from the past. If you are liquidated, you would think that this would be sufficient in terms of alarm bells ringing, and that perhaps your spending might then become a little more humble.

However, since their reformation, they have transformed their ground and gone barrelling up the leagues , back to the Conference South in virtually the blink of an eye. Yet, the reason Farnborough are embroiled in this relegation battle with us is that they were deducted five points last week for financial irregularities. This and the fact that the ground has been utterly transformed, yet the big seated stand has no roof, despite the stanchions to support one, and hasn’t done for a couple of years now. Read into that what you will about whether they've learned their lessons.

Yet, to bang on like this is to sound full of grapes that veer towards the tart in flavour. Both Farnborough and we were scrapping to save our seasons, and our places in the Conference South. That was the theory. In practice, it seemed only Farnborough were properly involved. 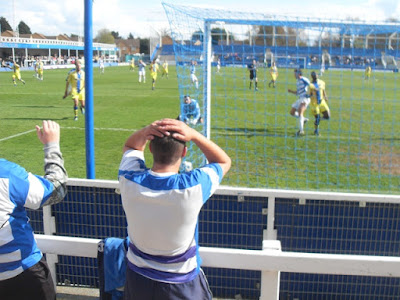 Given our last two games finished in 1-0 defeats, despite playing against 10 men for long periods, it was widely felt that if we were to win this game, we needed to score first. As such, an opening 4-5-1 formation was not the statement of intent I was after. This was changed at half time, after heads and brick walls had come into contact repeatedly, but not before the belief appeared to have ebbed away from those charged with doing the business on the field.

The only player to really emerge with any credit was keeper Dan Thomas who threw himself about heroically to stop Farnborough properly taking our morale apart with a series of excellent saves, four in quick succession at one point. Farnborough keeper Craig Bradshaw by contrast had precious little to do, except listen to remarks from our travelling collective on his Rubenesque figure.

Two proper chances came in the second half, Ollie Palmer going one on one with the keeper but pressure from Bradshaw and a defender on his heels saw him drill the ball wide of the post [see picture above]. Later Sam Pearce found himself with space to put the pistons into action, welting the ball over the bar from around the penalty spot. 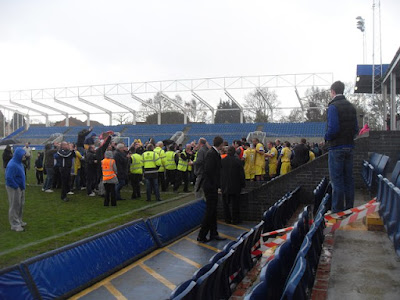 Overall though, Farnborough wanted it more, and their players deserved to drink in the celebratory pitch invasion that followed the final whistle. Our players applauded our support, but got begrudging taps of the palm in return. I’d like to think they know they’ve been disappointing far more often than not.

So, how it stand is this. We remain outside the relegation zone thanks to Maidenhead and Hampton & Richmond both losing. Hampton however retain a game in hand, and will play Basingstoke Town on Tuesday. Basingstoke still need positive results to make the play offs, so hopefully that will leave us outside the zone come next Saturday 3pm. If so, we need to win against Staines (now no longer part of the battle, which may be to our advantage) to be absolutely sure, although theoretically a draw could still be enough. Maidenhead have to play Eastleigh while Hampton play already relegated Thurrock. I think that tells you we have to go all out for a win. One last effort required.

The worrying thing is that against Farnborough, despite the circumstances, we looked like a side beyond effort, running out the season, mentally on the plane to Mykonos. If only we had that level of comfort.
Posted by skif at 11:32 am