My fellow London-dwelling Havant & 'Ville fan, Adam Cole, is currently working on secondment in Madrid. This meant he missed a large chunk of the H&'Dub end of season run in (for some reason Fuzzbox's 'International Rescue' just started playing in my head). Owing to this absence, our man went in search of an adequate (under-performing, porcelain-hued) replacement. Read about the chase, and the catch, below.

Previously your correspondent brought you tales of ice hockey when the guv’nors decided to banish me to the snow and ice of Stockholm for a few days. Thanks to them working out the office was a considerably happier place without me stomping around the place, a new ticket was booked and the bags were packed, except this time for a period of 6 months. Now the majority of this period will be during the Spanish summer (either ideal if you’re the kind of person who judges your skin tone with a Ronseal chart, or not ideal if some cheeky foreign futbol is up your alley) which reduces the opportunities somewhat. Still, a free weekend with the season drawing to a close presented an opportunity not to be missed.

Football being the international language that it is, one of the areas where I was quickly able to establish a common ground with my colleagues over a coffee was the discussion of “the game”. The initial exchanges went something like this

Spanish Colleagues : “So, we guess you’ll be following Real then?”

Dubsteps : “Hmm, well, I’d like to see the Bernabeu (mission accomplished during Jose’s 1st home defeat in 9 years!), but I’d really like to follow a less successful team.”

Real Madrid Fans : “Athleti would be ideal in that case” – insert guffaws here

Dubsteps : “That’s not really what I meant, they’re in Europe most years”

Dubsteps : “Still in La Liga though……”

On the surface Vallecano appeared to at least tick some of the boxes in that they weren’t comfortably in the top division. They also currently have the novelty factor of being a complete financial basketcase and yet, despite the players having not been paid since the beginning of the season, they still found themselves comfortably in the promotion positions from the LigaAdelante. 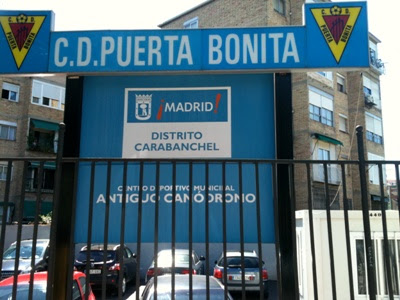 Having not quite managed to get my message across, and with my Spanish for Beginners classes having not yet got to the correct translation of “Tinpot” I decided a little internet research of my own was the correct course. Dropping through the divisions, I soon found my target, with the regionalisation at the Tercera Division level (“3rd” division, but, in a similar style to the bonkers English naming convention, actually at the 4th level of the pyramid) largely following the regions of Spain which means that “Groupo 7” is made up entirely of teams from the Comunidad de Madrid. Actually picking a team to bestow the Dubstep shekel upon was a little more tricky. The team based around the corner from the office “Alcobendas Sport” were comfortably romping away with the title, however, following my protests about not wanting to support a “successful” team, I wasn’t comfortable jumping upon that bandwagon. Working my way through the teams, CD Puerta Bonita ticked all the essential criteria that I had mentally established for myself.

The next stage was to research the team itself at (www.cdpuertabonita.com), but with my Spanish not really up to the job, I decided to trust things to Babelfish. My rudimentary Spanish had already worked out that the English name of the team was “The Beautiful Door” (a team name thankfully yet to appear in England – can you imagine what Grey & Keyes would make of the opportunity to “smash some beautiful doors”) I was both delighted and disturbed in equal measure to discover in the Multimedia section links for “Hymn” and “Bottoms”.

Presumably in an attempt to get the fans to join in with the sing-alongs they have published the lyrics to the club hymn on the website, a catchy number for sure (“You always take by flag”, “the race that makes you win”, “that chaste that wall-plate”, “the pride of Carabanchel”). To my mind, it seemed like a missed opportunity as the obvious lyric to follow for a little terrace ditty would be Madonna’s “La Isla Bonita”. It’s certainly something I shall be attempting to get started with the backing of the West Leigh Choir next season – starting with “Popey don’t Preach” (as a paean to our esteemed chairman) and seeing how we progress from there.

Thankfully the “bottoms” section is still under construction, so if that is indeed a picture of the 1st team doing the “Full Monty” I have escaped on this occasion.

And so it was that I rocked up for the finale to the 2010/2011 season on a roasting hot Spanish afternoon at “The Old Greyhound Stadium”, a ground straight out of the “How to Build a Stadium like Woking” manual – one mahoosive stand but not much else. The conditions certainly proved that it’s not just “mad-dogs and Englishmen” that go out in the midday sun and future attempts to blame poor end of season performances at home on the weather being a little balmy will henceforth be met with much scorn. Puerta Bonita themselves had nothing but Spanish pride to play for, but the day’s opponents – Navalcanero - were still at risk of relegation, two points clear of 18th and with a GD only two better, a draw would not guarantee them safety.

This scenario certainly seemed to give Navalcanero the early impetus, with Puerta Bonita seemingly unable to do anything but generally punt the ball in the direction of their midfield who would be quickly closed down and tackled before another attack coming their way. After 15 minutes or so however, Puerta Bonita seemed to realise there was a game going on and slowly started to haul themselves back into it thanks to the midfield starting to hit some lovely diagonal balls into the channels for the willing runners of (9) Onega and (11) Morais to chase down and turn the Navalcanero defence. A well worked move on 17’ finally brought some noise from a crowd seemingly more interested in their sunflower seeds than the action and the breakthrough came on 20’ when an excellent cross left the Navalcanero keeper flapping at thin air and Morais was able to dink home from a couple of yards.

Sadly, there is no photo of this passage of play as I had been distracted by another Puerta Bonita supporter. Occasionally in the world of non-league you are “graced” with a presence from the world of celebrity. In recent years I can recall seeing both Teddy Sheringham and Darren Bent at games involving the Hawks but this was something truly special. I had a conversation with the…………wait for it………………. mother of a player that had once played one game for Real Madrid.

Whether it was the pictures on the iPhone, or little pad in hand, this lady had obviously decided I was some kind of reporter (yes, mam, accredited for the DubStep Journal) or scout and, having checked whether I spoke Spanish (answer : no) proceeded anyway to give me an update on (a) her son, the Puerta Bonita reserve keeper who is, as far as I could translate, bezzie mates with Beckham, Hierro et al and (b) an in-depth view of the key Puerta Bonita players. The (3) : Saul, I was reliably informed was a very promising left-back and my observation that the left-winger was “muyrapido” was met with such a look of disgust that I could only assume he’s been mean to her darling boy at some point in the past and she has taken a strong dislike to him.

Having received these pearls of wisdom from Mrs Sanchez Garcia I turned my attention back to the game. Whether it was the astroturf common at this level in Spain keeping things clean (slide tackle on that? no thank you?) or the end-of-season effect, there was very little nastiness from either side, both teams keen to work the ball in midfield to try and craft an opening. Having lost a ball over the main stand (no mean feat) and received a replacement from the special ball replacement dugout situated in the middle of the ground, Navalcarnero managed to work the equaliser they desperately needed. A goalkeeping error (presumably to the delight of Ma Reserve Keeper) meant an easy header at the far post from a corner led to a very fair half-time score of 1:1. 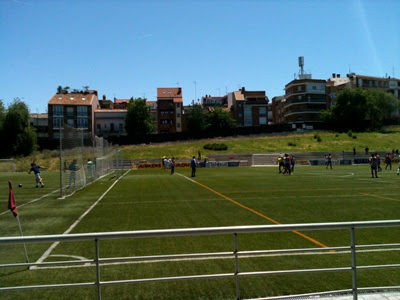 With news presumably having filtered through that CD San Fernando were leading, Navalcanero again came out for the 2nd half intent on pressing their opponents. At this stage Puerta Bonita seemed happy to sacrifice some of the possession in order to hit their opponents on the break. A fine tactic deployed by the manager and were it not for some disgraceful calls from the assistant referee on the far side, Puerta Bonita could have been out of sight by 65 mins. This seemed to rile the locals who managed to stir themselves from their carrier bags of Mahou beer for long enough to encourage their team with the inspired shout of “Puerta, Puerta, Puerta” (repeat to fade). Either that, or it was a shout of “Puta, Puta, Puta” aimed at the official that had provoked them.

As so often with these things, the sense of injustice was added to when Navalcanero went ahead on 74’ – again after the home keeper flapped at a corner allowing the ball to be bundled over the line. Navalcanero celebrated like a team that had, well, just ensured their safety, but switched off too early allowing Puerta Bonita to peg them back to 2-2. Or so we all thought, a well worked free-kick was whipped into the box allowing substitute (12) to head home, but was again dubiously flagged offside by the official on the far side of the pitch. 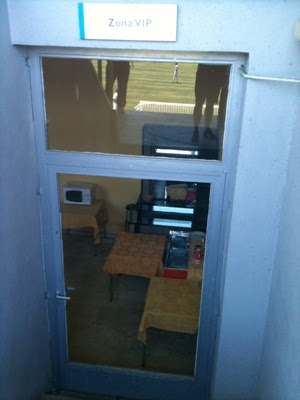 The final 10 minutes ruined the end-of-season atmosphere somewhat, with my MoMMorais leaving a “cheeky” knee dangling exactly where the Navalcanero keeper would run into it, and several handbag related incidents culminating in a punch being thrown by the Puerta Bonita (6) after some shirt pulling. The referee wisely chose to give a free kick in Puerta Bonita’s favour, book the opposition player for the shirt pull and send the Navalcanero coach to the stand for being a gobby sod. In between these incidents, Navalcanero made sure of their safety with a two-one-two leading to the 3rd being slotted home at the 3rd attempt after 2 excellent blocks from the home keeper.

At the final whistle I started to reflect on the game. It was certainly action packed for the neutral, and of a high enough standard to not simply be dismissed as parks football. Although hard to judge the standard, I think Puerta Bonita would certainly provide good competition for my own beloved Hawks. My final musing was that as leaving the ground I wandered past the previously unnoticed VIP Suite. This appeared to consist of some broken plastic furniture and a dubiously stained microwave. How reassuringly tinpot.

article by Adam Cole
Posted by skif at 7:17 pm