Recently I’ve been watching a lot of film about the First World War, being that it’s the hundredth anniversary since Archie Duke shot an ostrich cos he was hungry. Something like that anyway, damn my Curtis/Elton education, Michael Gove was right.

The images from that time are nasty of course, and I was grateful that I would likely not see anything so horrific and dreadful in my life time. That was at least what I thought until I saw Nic Ciardini’s performance here against Concord. You might think that’s a comparison too far, how can I possibly be so glib? Well, if you DO think that then you weren’t THERE maaaaan. 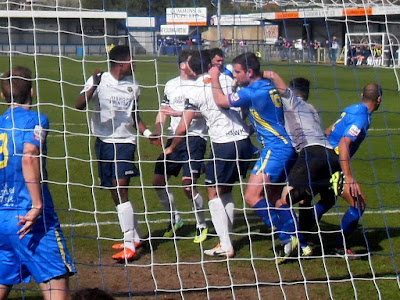 Of course, I am over-stating the case for effect, and being quite offensive with it, for which I apologise, but I’m genuinely unsure as to whether I’ve seen the like from a player of his calibre over the years. Every pass was over-or under-hit while his first touch was often like that of a teenager’s first introduction to a lady’s breast; he was either too nervous and awkward or far, FAR too grabby, like Rod Hull introducing Emu to Michael Parkinson’s face.

Now, many people say that Jesus was the great redeemer, but of course they were wrong, ‘football’ being the right answer. I’m really determined to get some angry letters this week, aren’t I? After emanating such filth and stink, what Nic should have been taking was every item of clothing in the ground to be rigorously dry cleaned. Instead, with ten or so minutes left, what he found himself taking was a penalty.

It was a relatively controversial award as well. Concord defender Steve King rose high in the air to head away a free-kick, and on his way down tapped Aristide Bassele softly on each shoulder as though giving him one of those mini ‘alright mate?’ massages that fellas do these days in lieu of a buttock tap. By the letter of the law, a push, but the type that is rarely punished in the penalty area. There was no desperate appeal from our lads and when the referee blew his whistle and gestured like an estate agent introducing some prospective buyers to a show home's breakfast bar, everyone ambled north of the area seemingly assuming he’d given a free-kick to Concord for backing in.

Once the reality sunk in for the Concord players they all grabbed their faces in such a way as to suggest they’d been painted by Edvard Munch, while our players reaction was as if the ref had chosen the moment to give his testicles an airing.

Of course, when we saw who was picking up the ball, then never mind the Concord players, it was our eyes that widened to the size of basketballs, jaws clanged to the floor like cartoon anvils and our mouths losing all their moisture. Like I say though, it only takes one moment to score a goal and to change your day, Nic’s crisp take beating Jamie Butler’s well-judged dive. He WAS redeemed and then, just in case he went and ruined it again, instantly substituted.


So, as with Bromley last Saturday, we played nowhere near our best yet ground out yet another 1-0 win. Vital too, as Concord are in the mix with us, Dover and Bath for that final play-off berth and had overtaken us in the week playing two games to our zero (yes, even in April we’re not immune to a postponement). Dover currently occupy fifth place after their midweek results but we still have games in hand as a result of our game against Maidenhead last Monday succumbing to a downpour close to kick off.

Thus it remains in our hands. It’s still very tough with six games to play in thirteen days but the way this team is surmounting all (well, most) obstacles, when individuals having a shocker can still be the match-winner, I’m certainly not going to bet against them.
Posted by skif at 11:19 am