Dagnabbit. The suckerpunch of an 89th minute defeat against Tonbridge was followed by something similar, only with a lot more bruising, away at Bishop’s Stortford.

The drawing up of the injury and absentee list began before kick off with Dennis Oli reporting in with a throat infection, Alex Przpoleswski attending a funeral and Jake Newton dealing with hamstring ping. Even the warm-up wasn’t spared a casualty, goalkeeper Scott Bevan prepping with such apparent gusto, he broke a bone in his hand. Eighteen year old Academy keeper Charlie Searle was, thankfully, making a rare appearance on the bench and deputised last minute in a mature manner that belied his milk monitor face; a face that is less training ground and more paper round. 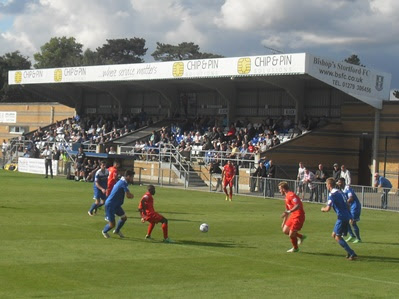 A hard fought first half hour was followed by fifteen minutes of Hawk domination, with goal-lines being repeatedly cleared from right in front of us, by diving keepers, last gasp hetaders and on one particularly galling occasion, our own captain Ed Harris’ arse’o.

Happily amongst all that Christian Nanetti was able to do what he does best, mocking lunk defenders with his pace and guile, powering behind their shame and crashing a twenty yarder past Stortford keeper Joe Wright. Christian then trotted behind the goal to celebrate with our cosy travelling collective. Big ten’s with @IceColdCole, then a high five with Mr Ketchup. It appeared he was working his way through all the hand-fun options (well, ahem, maybe not ALL) as he worked his way down the line of celebrating Hawks. Once he’d got through handshake, fist bump, rock/paper/scissors and a quick Thumb War, play was restarted.

However the second half wasn’t nearly as much fun, despite Perry Ryan hitting the post early on, with Perry, Pedro Monteiro and Hollywood Harris all needing to be substituted due to niggling injuries. Unfortunately, all this meant a lot of subs playing out of position, some headless chickening and a whole seven minutes of injury time, which Stortford capitalised on. Their equaliser, an easy header from a set-piece, arrived in the 88th minute, while their winner, an easy header from a set piece, came after five of the added minutes.

Should have had it wrapped up by half time, instead we suffer a second consecutive defeat. Bollo. However this is only the second time we’ve had two defeats in a row under Lee Bradbury’s stewardship so the panic button is safe from a’pressing for a good while yet.