Any readers whose only source of H&Dub information is this site might have a skewed view of how the last few weeks have been. It has been six weeks since this site has managed to observe a fixture, and that was a barrelling 5-0 win. You join us again after a month and a half, and a workmanlike away win is here to greet you. You might be of the mind that the good times have been rollin’ down at Westleigh Park. Balloons, tables full of empty bottles, waking up on the local recreation ground wearing only a pink stetson and a smile, that kind of thing.

However, after our nine goals in 135 minutes in our late-October Fest, where a second half comeback against Dorchester resulted in a 4-2 win, followed up by the aforementioned ‘Lady Godiva’ against Farnborough, we then proceeded to score only two more in the subsequent six games. That run included two FA Trophy tussles against a post-financial meltdown Weymouth. Now languishing in the bottom half of the Southern League, a division beneath, they nonetheless scored two goals to our nil in the replay at our gaff.

Aside from those, our league performances have included a 3-0 dump down at runaway league leaders Woking and three draws (a scoreless against Eastbourne, and two one-eachers at Staines and at home to Weston-super-Mare). 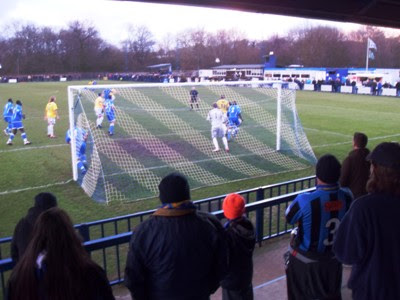 So you haven’t missed any further wins, unless you count the 2-0 victory at Wessex Leaguers Blackfield & Langley in the Hampshire Senior Cup. And I don’t. Although we have lost those kind of fixtures before, as Shaun Gale takes the county competition about as seriously as suggestions that he should wear nothing but a comedy wig and a onesie in the dugout.

Still, that would be a better option than the tar and feathers that quite a few of our supporters would like to see him wearing. Many feel, and have felt for some time, that if this club has any ambition left, that a change in the managerial seat is needed. Of course, that is based on a clear supposition. Do we have any?

Our chairman Derek Pope appears to be quite stubborn in this matter though. Shaun Gale is, and will be, manager. End of conversation. Indeed, in the recent ‘Biggest Show of Loyalty of All-Time’ awards, Derek beat Greyfriars Bobby into a clear second place. In a way I kind of admire this kind of thing in the modern world of football, even though the grey sludge of apathy has been smearing itself across our club for some time now, with no clear end in sight.

However, every now and then we’ll get a decent result and that, despite us being entrenched in 15th place for the last month, keeps things sputtering along like a faithful old motor that can get you to the shops, but you wouldn’t trust on anything resembling an incline. If metaphors aren’t your bag, let’s just say you can’t see us putting a decent run together anytime soon. Which is a problem considering our next two games are against our bitter local rivals Eastleigh who’s top brass are bouncing around like toddlers on too much Haribo, crowing about new investment and beginning to introduce new faces as regularly as Marti Caine in the late 80’s. 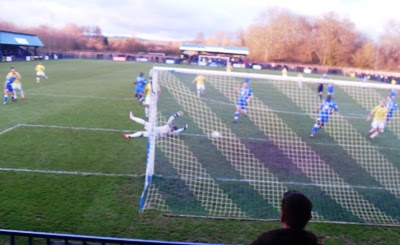 Neither we nor Tonbridge ever took this game by the horns but of the chances that both sides had, we made the best use, eventually. Tonbridge can rue the striking of the bar in the first half, and a wicked deflection in the second half from a fierce shot that hammered into the hoardings no more than a foot wide of the post. Similarly, we can also regard the fact that Scott Jones, Sammy Igoe and Sam Pearce had close range efforts that were not prepared to mingle socially with the net, as evidence of attacks that came close to bearing fruit.

Happily, our fruit bowl was slightly better stocked than that of the Angels come the final whistle. Ten minutes into the game, Steve Ramsay scored the type of goal (see above) for which he is becoming renowned i.e. one from the edges of the box that doesn’t so much rocket between the posts, as skid at a leisurely pace, as though on a Sunday afternoon duckpond stroll. On this occasion, it took a slight detour off the far post before reaching its desired destination. 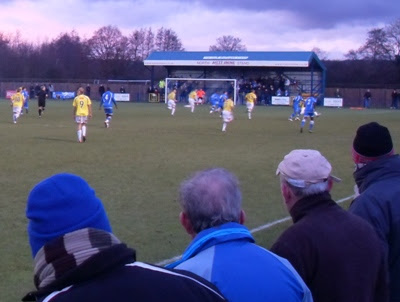 It remained even for the rest of the first half, but Tonbridge came out after the break determined and, as is so often the case, we came out to spend a few minutes picking the half-time sandwiches from our teeth. As such it was poor marking that led to the Angels’ equaliser, Tim Olorunda crashing home after the ball was neatly headed down for him three minutes into the second period.

Arguably it was a very similar situation that eventually saw us re-take the lead with ten minutes remaining. Some good work on the flanks eventually saw the ball bobbling around in the six yard box and Ollie Palmer, on as a substitute, used considerable savvy to nibble at the bouncing ball with his forehead and guide it expertly between the panicking defensive bodies.

After this, we were required to defend stoutly, and did so. After we took the lead for the second time, the win was never in any doubt. An ideal confidence boost for the 'we v Eastleigh' panto season.

Now, I try not to worry about goings on at Eastleigh these days. However, a Boxing Day win at Westleigh Park would trump turkey and the trimmings, or chocolate coins in a big sock, as the ideal festive treat.
Posted by skif at 4:08 pm