After Wes Fogden had been with us about a year, the disreputable organ before you wrote the following about him:

“Despite apparently being named after a minor character in Last of the Summer Wine and having such an enthusiastic proboscis you could spear a bison with it; he has fast become a terrace favourite. He has a Willo-the-Wisp-ish gait with the ball at his feet which means he draws the brutish kicks of brick-faced opposition doggers like a magnet drags iron-filings round a bit of paper. However he just keeps getting up like a bionic man, ignoring the bruises to be involved in a great many of the chances we create.”
- Welling vs. Havant & ‘Ville, March 2010


That was the love that was altogether rather keen to speak its name, and it’s not really stopped rabbiting about him since, with Wes winning Player of the Month and Year trophies so often he’s had to have the floorboards reinforced beneath his mantelpiece.

This site is rarely pleased with itself, but if we were to blow a trumpet reveille in our own honour, it would be to signal that the paragraph quoted above sums up Wes, our Wes, rather nicely. As a jinksy midfielder bubbling with effort, and dripping with élan, he would receive a great deal of less-than-artistic defensive attention and was kicked up in the air so many times as to resemble an attempt on the hacky-sack world record.

Despite this he would never turn round and aim his studs at the defensive spuds, never grabbed a throat, and it’s just as well he never tried to go nose-to-nose with anyone as he might well have had their eye out. Which is almost certainly a red card offence. However, Wes remained as clean as a Christian rock band’s repertoire.

However, Wes has now gone. Left us for pastures new. Happily though, this has been in the very best of circumstances. We must be grateful that the radar used by Football League clubs to track young players that dropped back into the semi-pro game was clearly on the blink for two-and-a-half years, but now that it’s back working, Wes has been elevated to League One, taken as an emergency loan by AFC Bournemouth with a transfer to follow in the next window.

Now that he has gone, we are detoxing. The high held over into the first half of this game but, sadly, if ever a second half was like a crack comedown, it was this one. With Craig Braham-Barrett also pulling up with a groin injury in this post-Fogden world, our side looked about as a pacey as a milk-float going over freshly-laid tar. However the first half was more than decent, taking a one-nil lead into the break courtesy of Ollie Palmer’s first Hawk goal. As the ball bounced in front of the keeper Tommy Forecast, Ollie Ollie Ollie was quick to react and poked it between both hands and legs before the man in gloves could claim control of it.

So far I have neglected to mention the other parts of our eventful week. Firstly, it was my good terrace chum Mark’s 50th birthday and we observed the happy occasion by taking over the West Leigh Park hospitality suite, occasionally sharing the space with players of the present, and those of the distant past. Indeed, losing a hero to challenges much higher up the pyramid this week, it was perhaps fitting that late-80’s/early 90’s Waterlooville FC legend Paul Moody, who went on to play for Southampton, Oxford, Fulham and Millwall should also be in said suite for a visit.

A knock on effect of our party making a bit more sartorial effort than usual given the celebratory circumstances was that it may have appeared, from a distance, that our behind the goal collective had hung up a large Reservoir Dogs poster in place of the usual flags. 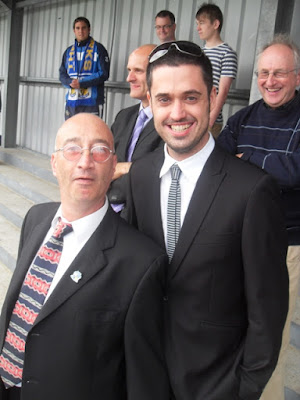 So far, so fair enough, in terms of our news, but possibly the biggest surprise of the week was that, hearing our club was once again being picked up by that Football League radar, we took the currently club-less Vincent Pericard in from the streets for shelter, and a short-term deal, as he aims to impress sufficiently to get another pro contract. This is a player with a bizarre career trajectory.

He has known Champions League football with Juventus (albeit very briefly), Championship-winning with Portsmouth, Premier League action with Stoke and, well, the inside of Her Majesty’s Prison Exeter. After being caught speeding in 2007, he tried to suggest his Dad had been in the car when , in fact, he’d not been in the country, earning five weeks porridge for his, err, oversight.

By the time we introduced him onto the field of play, our lead had vanished – and rapidly. In the early seconds of the 56th minute, we were one up. As the 57th approached the 58th, we were 2-1 down, our defence looking so woozy as to suggest they had been blindsided by an evil anaesthetist prior to Bromley’s attacking frenzy.

Given our position in the table, we had to go for it, putting three up front, but with the gigantic triumvirate of Peacock, Palmer and, now, Pericard more about power than precision, it was never going to be pretty. It wasn’t and Bromley were certainly worthy of their suckerpunch win, Lyall Beasley being far busier than his Kentish counterpart.

Indeed, had Pericard made an instant impression, five levels below where he was at just three years ago with Stoke, and snatched a point for us, I would argue that this would have been harsh on Bromley; perverted the course of justice, if you will.

Although Vince does have form in this area, today it was not to be.
Posted by skif at 12:44 pm