The big action at the Crabble Ground in sunny, coastal, Frenchandtheyknowtheyis Dover was less concerned with the performances on the field as that on the terraces. With respective gaffers Martin Hayes and Shaun Gale both under scrutiny for poor performances in recent weeks, today was a Hawks v Whites grump-off.

However, right from the get-go it was clear Dover had the advantage, not just because of being at home and therefore in greater number, but because their chairman took time out in his matchday programme column to mention the phrase “vitriolic abuse” not once but twice, suggesting there had indeed been a lot of it, with some “obscene chanting” thrown in, as a get-some-get-more-free offer on the part of their more vocally disgruntled supporters.

Prior to kick off I was wandering around behind the dug outs and because of the Crabble’s position on the side of a steep hill, if you are stood behind the dug outs, you would need an office block window cleaner’s hoist to winch yourself up in position to be able to see anything approaching football. 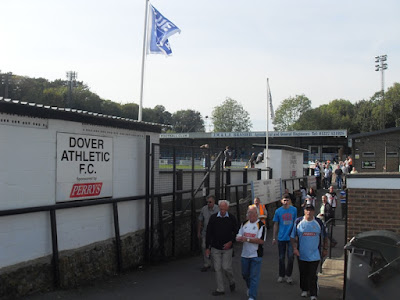 Being relatively hidden away here by the turnstiles, several sets of Dover supporters were gathered and, indeed, the main topic of conversation appeared to be their shared loathing of the current manager and that the ideal result for them today would be a Dover win and for, somehow, this to lead to Martin Hayes’ dismissal.

“I’m only here cos it’s Havant” said one, archly. I’m not even sure I could claim that, I am merely a creature of habit. Then again the same could be said for alcoholics and chaps who like to sniff knickers. As a non-League fan of some years standing, this is where I am placed on the evolutionary scale.

Although, that said, my habit has waned a little of late, with a couple of Saturday fixtures missed due to attendance at music festivals. Needless to say these days off featured two of our three wins, and big ‘uns at that, last weekend’s trip to Southsea Fest meaning our three-to-zero thumping of Thurrock went unwitnessed by these eyeballs. However these results paint a false impression of a season, and one of my terrace pals texted me on Saturday evening to say that while a three goal victory was welcome, it had more to do with the abject terribleness of the opposition than our collective spunk properly jetting forth. 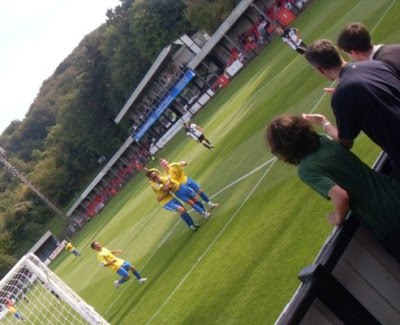 Dover even took the time to get in some advance grumbles on the Conference South forum. Let’s face it they’re slaying us on the sulky front. They suggested it’d be a drab 0-0 and that, therefore, they could carry on slaughtering their manager with impunity.

It wasn’t a 0-0, but nonetheless Dover’s fifth home draw in six games. They had to fight from behind too, Wes Fogden having given us a lead going into half time, capping a spirited first half performance by battling past a Dover defender and firing a perfectly angled shot through the tiny gap between the defender’s leg and the keeper’s hand into the far corner.

Dover’s equaliser came with thirteen minutes remaining in the second half and given that Billy Bricknell had missed a goal so cheap, available and unguarded it was like a Poundland closing down sale, it’s not like we hadn’t seen it coming. Their goal was very much like ours in a way, with Donovan Simmonds collecting a Bricknell back-heel before getting behind the defence and firing home expertly. 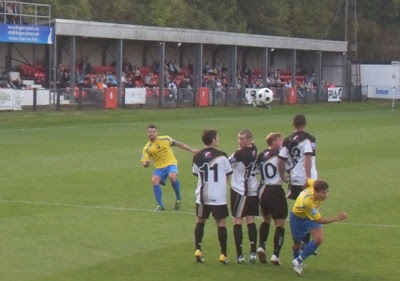 So, Dover haven’t lost at home and are 12th, yet were singing anti-Martin Hayes chants as well as pro-anyone-else-but-Martin-Hayes-as-leader-of-the-black-n’white-army material. We are 17th and just didn’t really sing anything much, applauding our team off at the end. I’m not sure we’ve got the hang of genuine disgruntlement.

That said we’ve seen a lot worse this season. This wasn’t exactly thrilling, but not dreadful either. However one can’t help but feel we should have held on. Waiting at the tunnel for the players to leave the field, I wasn’t sure what to be most disappointed by. Losing a lead away from home, or finding out as he walked off the pitch, that our beefy, heavily tattooed, Scottish skipper Lee Peacock’s voice is less chain-smoking Clydeside docker, more Rab C. Nesbitt’s mate Jamesie Cotter experimenting with helium.

Talk about having your illusions shattered.

ADDENDUM 26sep11
Having lost only two matches so far this season, Dover sacked Martin Hayes less than 48 hours after this one-all draw. On an entirely seperate note, Havant & 'Ville have lost six games this season.
Posted by skif at 7:12 pm